Ahoy! Another Groundhog Day Resolutions year comes to an end!

In last month’s report, I was surprised that I was feeling OK about myself, despite having failed to complete any Groundhog Day Resolutions. I hypothesized that maybe I someone achieved the goal AFTER my Groundhog Day Resolutions push, what I called the “heartfelt goal” where I had managed to find or create a sanctuary for me and my friends. The revised hypothesis looks like this:

As I noted in last month’s report, this is a remix of an older model I had called “creative independence” that sought to create a state of being where I could be creative, self-supporting, and fulfilled. That’s already manifested in the form of the DS|CAFE Coworking Discord that I had started on a whim in 2016. These days, the energy that used to go into my blog is now shared and remixed with others in the Discord, and it is this interaction that keeps me connected and inspired. It’s a small server, but it’s been enough to supply positive energy every day. It’s also been great for helping me define my community values in a way that hopefully promotes the kind of creative sanctuary I want to see!

So, I’m going to consider the main Groundhog Day Resolution puzzle solved for now! So long as I take care of the DS|CAFE, it’s likely to continue taking care of me in return. Of course, online communities have a chance of messily imploding as they grow, but I am feeling optimistic that it will grow slowly and steadily for the foreseeable future. It is an official and necessary part of my personal and professional life.

With GHDR CLAIM-FIXED, the rest of this report is gravy! The year’s theme has been transitions, covering these three areas:

In review, I have been craving simple answers and solutions with regards to gender identity. I am starting to accept, however, that it’s been more complicated than I wanted to because I am also complicated in my layering of contexts and multiple perspectives. I never have a simple answer to anything. I am much more likely to figure out what adaptable strategy I can use that maintains flexibility and power across a range of situations. So today, I’m thinking of my transfemme side as just another facet of myself. I have to deal with it every day, but it is NOT the totality of my existence. In the grand scheme of things, it’s more important for me to be a vessel of positivity and possibility, a catalyzing resource and trusted compatriot, helping others like me onward on our creative journeys. Some days are really pretty bad, when I feel like a stranger in the horror of my own body, but having those positive anchors helps me get by. In time, it will get better.

My current gender expression posture is still my version of “non-binary”, which I think of as an acknowledgement of the reality of my physical existence. I’m not part of the gender binary not because I don’t fit in, but because I’ve chosen to embrace it by presenting myself with less editing than before. At least, that’s the plan.

I’m still doing it as a daily 15-minute morning push with a friend from the coworking chat, and I’m getting closer to being able to launch something on my new website. I’m working on a minimal new graphic identity to help distinguish my upcoming work from the old; theobjective for the new website is to represent me as I am now, not as I was 20 years ago. Anyway, we’re going to take a break from our websites on WEEK 9 to do short podcast experiments. It would be neat to cover topics that I don’t with my buddy Sid; we haven’t gotten together for quite a way due to the pandemic and I am itching to do some media work.

The new website will be based on self-hosted Ghost running on Opalstack. Opalstack is a developer-oriented web host that is the spiritual successor of WebFaction which got absorbed by GoDaddy then killed. Ghost is much leaner than WordPress, and as a bonus it uses the same Javascript/NodeJS technology stack as the learning sciences software projects I’m working on. It’s good to not have to hold two tech stacks in my head at the same time!

Speaking of project work, I’ve spent the last month doing GUI Design/Implementation for the “script wizard” that allows students to use our simple programming language without having to type or memorize anything. It’s been quite a while since I’ve actually gotten to do any GUI design. I realized last week that the work I’m doing with the GUI is directly applicable to knowledge management tools that I’ve wanted to make. I’d love to have a tool where my writing can be swizzled around and visualized, and I am writing code that converts text to graphics and back again.

I seem to have hit a comfortable balance of between 3-5 hours of focused work each day, even on the “social days” I set aside on Monday and Tuesday. This is great. I work in spurts of 60-90 minutes, then rest for 30-min to an hour to recover. I sometimes take a nap, which helps me freshly tackle problems from a new direction.

As good as this has been, a couple of things bother me:

To help maintain energy, the no carbs before 6PM continues to keep my brain from fuzzing out. My sleeping schedule is much improved thanks to the 15-minute morning habit. I’ve been pretty good about stopping work around 6PM. I’m surprised, though, by how much empty downtime I need in the form of hours of mindless television watching or video gaming. It seems kind of wasteful, but without it my brain doesn’t seem to reset enough to fall asleep. I’ve been averaging about 7 hours a sleep a night.

An unexpected source of stress has been from doing the Main Story Quest of Final Fantasy XIV, which has required group content duties involving strangers. This give me a feeling like the first day of P.E. at a new school, but I’ve been trying to push through this feeling with the encouragement of a couple gamers from the coworking forum. Even then, it takes weeks for me to muster up the energy to do it.

Exercise? That hasn’t been happening, but another friend from the coworking Discord had an idea for having a “gym day” on video chat to get people working out together for a few minutes. I love that idea, so it’s probably going to happen at least once.

The Month in Images 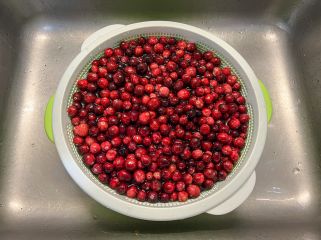 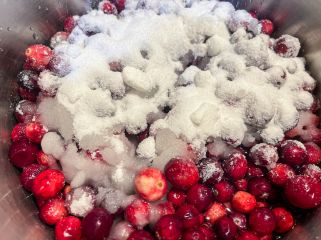 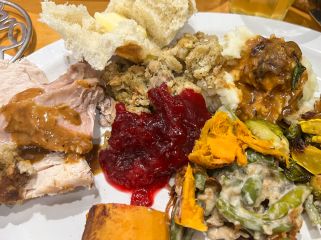 A friend told me that cranberry sauce was simple to make, and as I live in New England it seemed appropriate to acquire local cranberries (ABOVE LEFT) and make them for Thanksgiving. The general recipe is to boil the cranberries until they burst in a 1:1 ratio of sugar to water (ABOVE CENTER). Near the end you add orange zest and you’re done! I used a LOT of orange zest in mine, not knowing how powerful it is. A little goes a loong way (ABOVE RIGHT). Next time I want to make something more like a relish/sauce mix. 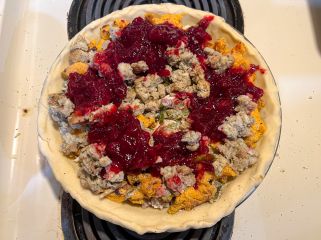 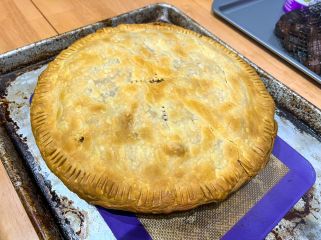 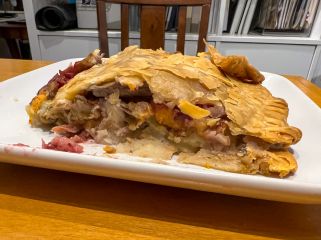 Speaking of Thanksgiving, one of my favorite things to do is to take all the leftover mashed potatoes and layer them with turkey, cranberry sauce, stuffing (ABOVE LEFT). Then I bake them into a pie (ABOVE CENTER). This year I just used a supermarket Pillsbury pie crust, but I put too many wet ingredients into this pie so it was kind of runny (ABOVE RIGHT). STILL DELICIOUS though. I should have blind-baked the bottom crust, but I wasn’t sure how to do it without those pie weights they use on The Great British Baking Show. They’re expensive! Next time though I might try this ball bearing hack as they should be really cheap. 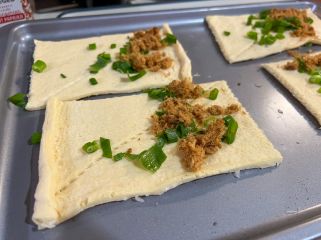 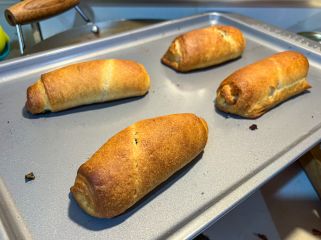 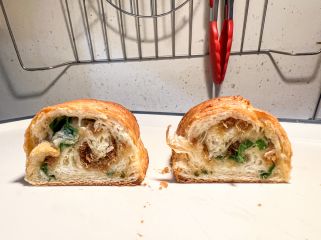 In other food experiments, I was advising a friend what kind of pork floss he wanted. This is kind of an Asian shredded pork jerky, and it comes in a fuzzy form and a stringy form. The reason he wanted it was to make some kind of pork floss roll, and I wondered out loud if I could make a bad version of what I remembered from Taiwan (this one looks pretty close). I got some Pillsbury Crescent Roll Dough and tossed some green onions into it with a bit of butter and pork floss and rolled ’em up (ABOVE LEFT). The results looked promising (ABOVE CENTER, RIGHT) but didn’t really taste that good. I think I should saute the onions in butter first and use something more like a regular bread…maybe the pre-made “French Bread” Pillsbury. If I had more counter space I might actually try to make the dough, but I’m too lazy to try right now. 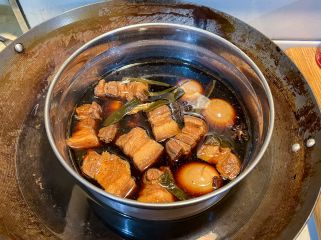 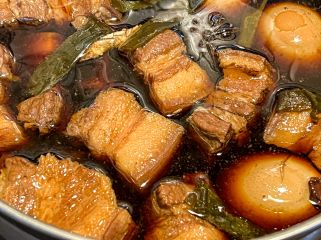 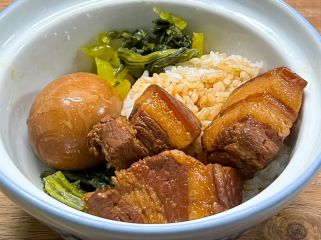 Another comfort food I like to make is pork belly stew, which is basically a fatty pork like uncured pork belly with a 1:1 ratio of soy sauce to water, a good amount of caramelized sugar, with a sachet of star anise, cinnamon sticks, ginger slices, and green onion stalks. The resulting stew is thin, but is great for flavoring rice and hard boiled eggs. I had just read somewhere that you could use a double boiler (ABOVE LEFT) to more evenly cook the pork over 90 minutes, so they would be uniformly cooked. It also seemed like a good way to gently warm the meat so it didn’t shrink and get stringy. The results were pretty promising (ABOVE CENTER) and tasted pretty good too (ABOVE RIGHT). I saved the liquid and froze it for later reuse, which will save me some time. I’m going to look for an inexpensive clay pot to use next time, as that should buffer the temperature swings even better.

So that’s it for the year. It doesn’t feel like very much happened or got done, but maybe my opinion will change once I do a comprehensive year review of all posts.

I’ll pick up the next Groundhog Day Resolutions cycle on February 2nd, 2022. Thanks for following along, and have a great holiday season!