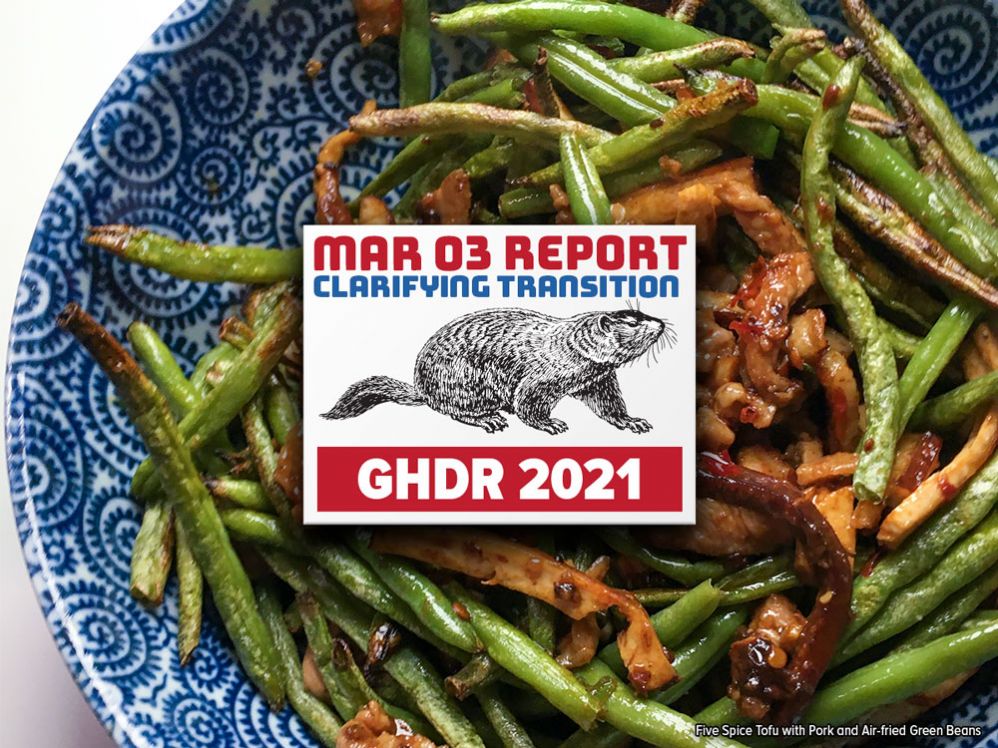 random pic of the month: I have been learning to cook this pork w/ 5-spice tofu and doubanjiang

It’s been a month since I declared TRANSITIONS as this year’s GHDR theme. Looking back at the February kickoff post, I feel I didn’t describe the essence of this theme very well. Let me take another stab at it before getting into the actual report!

Revisiting the Meaning of Transition

As I’ve mentioned in past blog posts, I have been working through issues related to gender identity; in this context, gender transition is the obvious reference. However, I’ve found that the point of gender transition for me is less about physical appearance as it is becoming comfortable and confident expressing that change to society. Another way I’ve thought of it is being able to project my inner sense of self into the outside world where everyone can see it. With that, though, comes a lot of fear and anxiety as well as practical legal considerations; What really do I gain from gender transition other than a sense of well-being in exchange for high odds of social conflicts? Do I possess the strength to go down this path???

I think the discomfort and anxiety that I’m dealing with regards to gender transition is similar to professional transitions that I am attempting. For example, when I switched my goal of becoming a game designer to trying out as graphic designer, blogger, consultant to freelance developer. In all these cases, I believed that I did “good enough” work and felt that I was progressing in my skill, but I also have never succeeded in finishing the master works that I thought myself capable of. In this case, it’s less about comfort/confidence than it is the hubris of thinking I am good at stuff without really knowing how to do it.

I think these two lenses might help me perceive the misalignment that I subconsciously feel between my internal sense of the world and the external reality of interacting with the real world.

Anyway, I feel I am in the limbo of being stuck between aspiration, desire, and action-initiated tangible achievement. Sure, I’ve gotten SOME stuff done, but it also feels like I’ve plateaued at “good enough” forever. In summary:

When I started the TRANSITIONS goal, I didn’t actually know how this would work out. I started several tomes to collect the insights as they came to me; I started with the following (you can jump to the list from the 2021 GHDR page):

What’s going WELL for me

It hasn’t been all doom and gloom.

At some point though, I will need to set some tangible goals of the type one associates with a New Year’s Resolution. I’m actually too freaked out by them to share, but I promise to get back to this throughout March.

Thanks for reading this month’s Groundhog Day Resolutions Report! The next one will be on April 4.