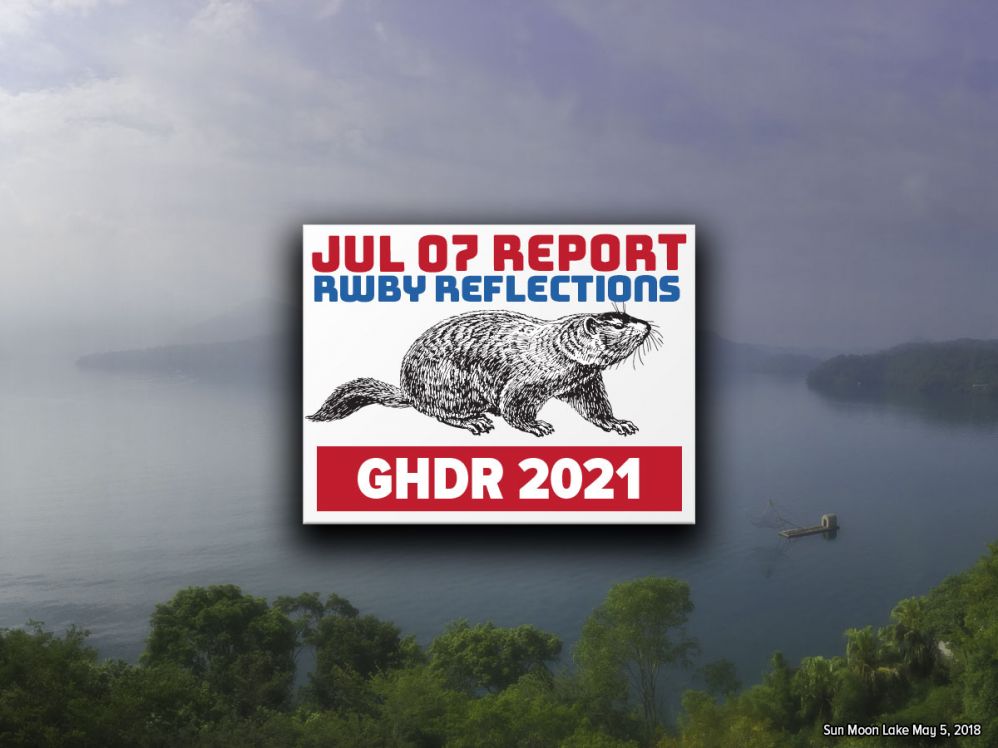 random pic of the month: View from hotel over Sun Moon Lake in Taiwan

It’s time for my GROUNDHOG DAY RESOLUTIONS REVIEW for JULY 7! :-) My focus for the month, as I declared in the last report, was to get a lot of Javascript project work done. I’m working on a rather large multi-system feature that affects the future direction of our codebase, and we don’t have a lot of time left to implement it. Stress! I am keeping last month’s mantra: “Not being done doesn’t mean I’m bad”. That helped a little. What helped a LOT was letting go of worry that indulging my curiosity to get started was perfectly acceptable. It’s taken several week to ramp-up.

In all other areas, I have not made any progress on the following:

It’s demoralizing to see so many projects initiated but not having the time, focus, and energy to do anything on them. I don’t think it is due to the lack of TRACKING this year either; from 2007 through 2017 I used to track EVERYTHING and create detailed plans, and the “win/loss” was pretty much the same.

From 2018 onward, I started tracking less (tracking wasn’t working) and setting smaller objectives until I stopped tracking entirely. The pattern that stays is (1) failure to self-motivate to start and (2) failure to maintain interest and focus through the projects that did start.

What’s new in 2021 is the preliminary ADHD/AUTISM SPECTRUM diagnoses, so I’m revisiting some ideas about ADHD brain.

I happened upon an excerpt from Peter Shankman in this interview where he describes ADHD as “[…] the brain’s inability to produce as much dopamine, serotonin, and adrenaline as ‘regular’ people’s brains produce.” This got me thinking about the hacks I do to stay motivated and productive that produce an increase in neurotransmitter production at the expense of focus. Without it, I can be listless for hours at a time and get nothing done. If I can generate an initial burst of curiosity, then that gets me moving so some work DOES get done.

I got to thinking about what other limitations might be attributable to lack of dopamine, serotonin, etc. Knowing what they are and how they work is useful in refining my productivity boosting system! I’ve talked about a lot of these before in the 2018 and 2019 GHDRs:

One of the signs of ADHD that’s mentioned is starting projects and not finishing them, and I didn’t think this applied to me because I don’t drop projects that have a commitment to someone else. But if I consider everything else? It totally fits the pattern.

Another takeaway is to not feel bad about my limits. For many years I fixating on cracking the productivity code that would unlock my creative powers, but nothing I have tried has lead to steady predictable output. As I look back now, I can see patterns that could be explained by ADHD/AUTISM SPECTRUM symptoms that are possibly related to neurotransmitter effectiveness.

Once I get some time for myself again, I’m thinking of tweaking my productivity tools to address these specific issues. That’s kind of exciting and I would love to gush about it, but my one objective for today is to POST THIS REPORT so I can reset and get back to project work. I’m already running low on energy and it’s unlikely that I’ll make progress there.

There is an animated web series called RWBY (pronounced “ruby”) that I started watching again, as I’ve been looking for more stuff to watch when winding down my day. I rewatched from the last episode of Season 3 to new seasons 6-8. I’ve emotionally connected with this series in a way that surprised me, so I started rewatching it from the very beginning in RWBY Complete format, which converts the individual short episodes into a full-length movie. I like the series more and more; at this point it’s one of my favorites and is ranking up there somewhere between Avatar the Last Airbender and Korra. I like it so much that I am starting to learn the lyrics for the opening songs, which has never happened before! :D

I started wondering if there was something else driving this feeling. What is it about RWBY that resonates so deeply?

I could think of three possibilities:

They do a good job with the music too. At first I thought it was just normal guitar-driven “cheese rock” with not very sophisticated lyrics, but when I started interpreting the lyrics with the events of the series it started to click with me. I realized how earnest and direct the words were, and combined with the rock style and great vocals and arranging they make for great songs. Right now, I really like the Season 4 and Season 7 opening songs, and there is a particularly devastating song from Season 6 named Forever Fall that made me cry my eyes out during a surprising scene. I liked how it narratively changed the tone of the episode, and it felt good to feel something strongly. I was surprised at how moved I was.

I mentioned the impact of Forever Fall to my therapist, and this lead to an exploration into how these emotions might be different from other things I had been experiencing lately. I realized that RWBY as a whole reminded me of what I once had and lost with friend teammates. When my friend Bevan passed away in 2003, that was the end of the last period I had felt that. I have grown increasingly isolated over the years, reluctant to reach out to people and feeling disconnected from the tribe, and at some point I just gave up though I don’t know why. I am remembering why it is important to form connections like this as I watch RWBY. I can see how the fictional Team RWBY resonates with my personal desire to be around positive-minded, self-empowered, conscientious, competent, generous, and kind people. And as I learn about the history of the RWBY animation team, I remember what it was like to work late nights with people like that…

I’m not sure what to do about it, but in the meantime I am listening to those songs A LOT.

The Month in Pictures 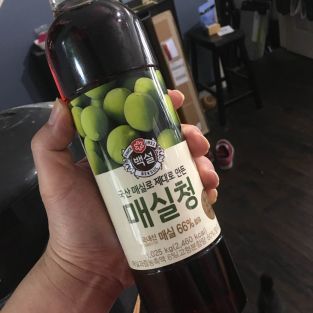 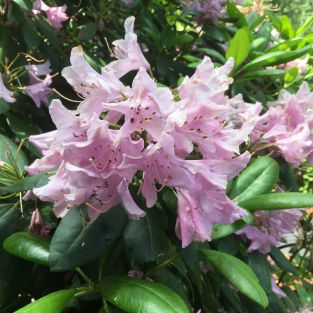 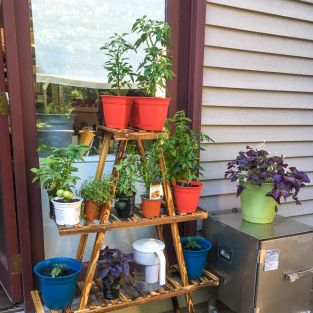 UPPER LEFT: Back in the 1980s I had a “prune juice sauce marinated steak” when visiting relatives in St. Louis. I thought it would be yucky, but I loved it. I haven’t had it since, so one of my side cooking projects is to recreate it. I’ve been looking for the recipe without much luck, so I’ve been buying different plum-based liquids. This is a bottle of Korean maesil-cheong, a green plum extract. I’ve been putting it in stuff to see if I like it, and it’s interesting but not really as potent as I want. I bought a bottle of PRUNE JUICE to test next.

UPPER MIDDLE: Those purple flower buds from a month ago are now flowers! I’ve seen these flowers before as a kid when we moved to Taiwan. I’ll have to ask my dad what they are.

UPPER RIGHT: Speaking of plants, I’ve been collecting more herbs and stuff to make a pile of greenery. I like looking outside my window and seeing them, and when I need to take a break from screens I can go water them and see how they’re doing <3 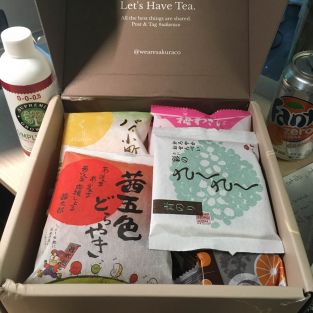 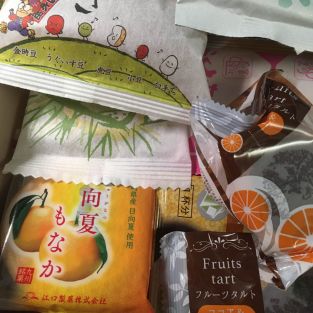 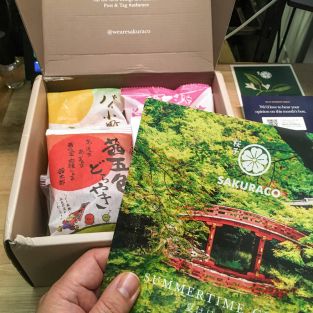 On a whim I am trying a 6-month subscription to SakuraCo, which ships boxes from Japan every month around a theme. It’s kind of expensive, especially when DHL shipping from Japan isn’t mentioned when you sign up, but I have to say that the quality of the first box was exceptional so I feel a bit better about it.

It comes with a nice booklet that describes the treats you are getting, with backgrounds on the artisans who are making them. It’s more like a small magazine that happens to come with food to sample.

I’m mentally filing this subscription under “self care” to reduce the sting of the expense. I also have to eat everything before the next box arrives!!! 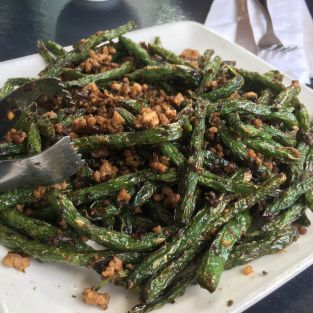 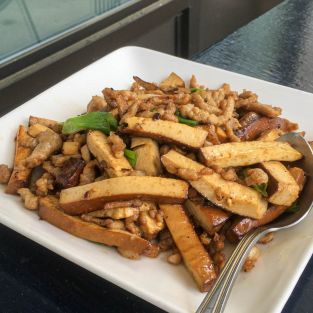 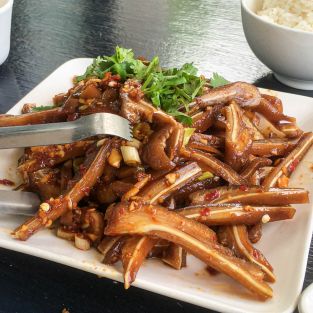 A local Chinese restaurant that I have not visited for 10 years now has an AUTHENTIC CHINESE MENU. After sampling it by myself, I invited a food-savvy friend to come out to lunch and try some stuff.

We started with two dishes we already knew: Dry-cooked String Beans (upper left) and Smoked Tofu with Pork (upper middle). The string beans were nicely charred, and the flavor of the smoked tofu was good too. I like the tofu cut up into finer strips. though.

The last two dishes were Pork Belly Stew (not shown, but it was very good) and Sliced Pig Ears in Savory Sauce (upper right). I have had these before, but my friend had not; he was curious how they compared to versions in Eastern Europe. They had a great flavor, though eating ears made me a little queasy so my friend took the rest of them home.

The major task this month and next is the Javascript programming work. This will occupy by “objective bucket” until September, when I think we’ll largely be done.

I’m also contemplating team and friends and what that all means for me. I’m not sure it’s what I really want anymore, but there is some kind of desire that I sense underneath it all.

A confounding month! I’m very tired. Thanks for reading this report, and have a great July!