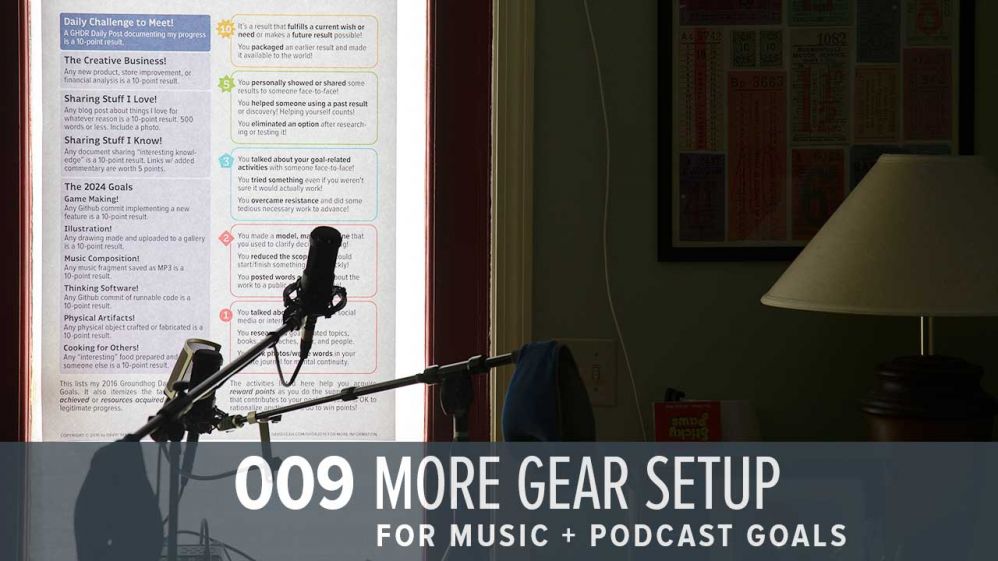 On Tuesday night I made the mistake of eating something before going to bed, giving me terrible heartburn all night. Upon waking I embarked on a 24-hour fast, subsisting on Harney & Sons Cinnamon Spice Tea (which is pretty amazing stuff); tomorrow I am going to break my fast with a big breakfast somewhere, probably the cute Midfield Airport Cafe so I can look at tiny airplanes as I stuff my face with pancakes. Now THAT’S a GOAL! :D

Other than working on the big Javascript project, I continued yesterday’s podcast gear setup by setting up the old Macintosh with the old audio interface, as well as trying out the new microphone stand (which is awesomely solid). Add to that the completion of a huge overnight data backup, the tidying and sorting of a zillion little pieces of junk into plastic ziplock bags, and some research into a possible storage solution for the rest of the Living Room Cafe, I’d say it was a pretty productive day overall. Detail follow! 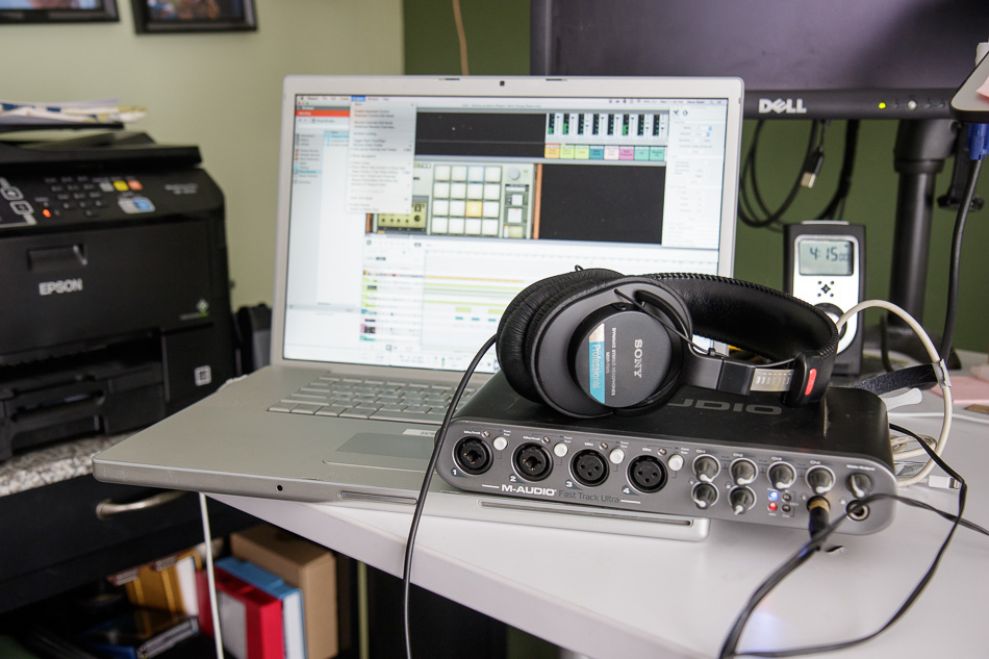 Remember how I was complaining about how my FastTrack Ultra Pro audio interface was no longer supported for MacOSX 10.11? My old MacBookPro 17 is still on 10.10 Yosemite, which works fine, so I stuck a label on it that said DO NOT UPGRADE and installed the latest version of the Reason audio software on it. It works fine. For good measure I also installed GarageBand on this laptop because a friend of mine had expressed interest in learning how to use it; we’ll schedule a “try to make it do something” night here in the Living Room Cafe toward the end of February.

I also got my new microphone stand, a K&M 210/9 for $70 with free 2-day shipping. I wasn’t familiar with K&M, but I knew my current microphone stand is flimsy and droopy. I wanted something better. I spent a good hour reading on Amazon, looking through the cheap $30-$50 stands and people seemed to think they were just OK. The K&M stands, though, seemed to have universal acclaim, so I took a chance. WOW…what a difference. I didn’t know this, but K&M stands for König & Meyer, a German manufacturer of high-quality music stands. This stand is super stable with robust mechanicals; even the plastic cable clips are thoughtfully designed to avoid the weaknesses I didn’t know other versions had. And this was their cheap stand. I was very pleased. I spent some time setting up the new microphone placement, which this stand makes possible because of the compactness of its horizontal boom. I am so happy.

I also updated yesterday’s post with some pictures of the gear (sadly, I didn’t get one of the new stand, which I’ll do tomorrow). With this, and getting the FastTrack Ultra working again, I’m ready to handle a variety of recording tasks. Also, I can now resurrect the podcasts with Sid again, so it’s time to get some stuff scheduled! Time to think about the actual Music Composition GHDR Goal, too! Many future goals unlocked, so I gave myself +20 points on my GHDR Goal Tracker.

My Living Room Cafe Project started nearly two years ago, and with the hardwood floors, new sectional, and tables the space is becoming a very functional personal co-working space. There are four more key projects:

I have been looking at some alternative approaches, such as repurposing kitchen wall cabinets and using then as standing cabinets, but I want a nice integrated solution. I want to keep the wall space as clear as possible so I can put artwork on them, and also push the tables as close to the wall as possible. The brainstorm I had today was that I could maybe find long and low TV consoles and have really short storage space. If it’s under 28 inches in height, then tables can slide right up to the edge if there’s about 4 inches of floor clearance. This also leaves the viewable part of the walls clear!

The main candidate for this is the IKEA BESTA system, which comes in a variety of pieces and finishes. I’ve been looking at Ikeahackers BESTA projects to get a sense of what can be done structurally with them. I figure one tall shelf unit for the books, and a bunch of low-slung tables both against the wall near the kitchen AND where the standing desk is now would handle all my media storage and more needs, while still keeping the walls clear. I’m a little worried if it will look too crowded, but I have time to do the visualization over months; there’s no huge rush to do this.

Another major chore was backing up my network drive. The drive, a Western Digital MyCloud 3TB drive plugged into my hard-wired gigabit ethernet, has all my digital photo originals, and hasn’t been backed up in months. I’ve been keeping backups on the actual digital camera media, but this makes my workflow slower than I like. Finally upgraded the MyCloud firmware, which fixed some bugs it had that prevented the automatic backup from working, plugged in a USB3 drive interface kit with a 1TB bare drive, and ran the backup. Since the MyCloud 3TB is actually a (slow) little computer, it is capable of backing itself up without intervention from another computer, reporting its status through a web browser interface. I had never seen it actually work, so it was a somewhat tense 24 hours of waiting to see if it would actually work. It seems to have completed, so I’m considering it backed-up. I’m nervous enough about it, though, that I’m thinking of adding a second network-attached storage (NAS) device to backup the backup, or possibly just adding another big drive to my PC workstation. HOWEVER, I would then need to get a bigger case, which means I might as well upgrade the PC hardware at the same time with a new motherboard…and it becomes a big hassle.

Well, at least I’m backed up. I think.

Today was a pretty good day. I was thinking it would feel “light”, but a lot of satisfying technical infrastructure was taken care of! I also got some billable hours in, and it went smoothly!

Process-wise, I’ve also been filling out my GHDR Tracker and using the revised Emergent Task Timer (ETT) form. I’m finding that I want to have more journal space on the GHDR Tracker, so I’m thinking of splitting it into two pages: one page for the MENU OF GOALS and POINT LIST (much like the poster version I posted a few days ago), and another page for journaling and point scoring. As for the ETT, I’m still finding little improvements to make. I think it’s going to be two variations in B&W and color, for a total of four.

It’s nice to design forms again in the context of my own use, and I’ve been thinking perhaps this is something I can use to launch my Patreon page. Perhaps patrons would pay $1 per form, or $1/month? I’m supporting several artists on Patreon and it’s a community I’d like to try out because it seems so…nice! Something to think about!

Tomorrow’s big goal is to eat a big breakfast, and then do some more network code improvements. I’m in the mood to tackle a different goal other than the music composition or form design stuff. Maybe work on some financials, costing out a new project? Repackaging an old one? I could get used to this! 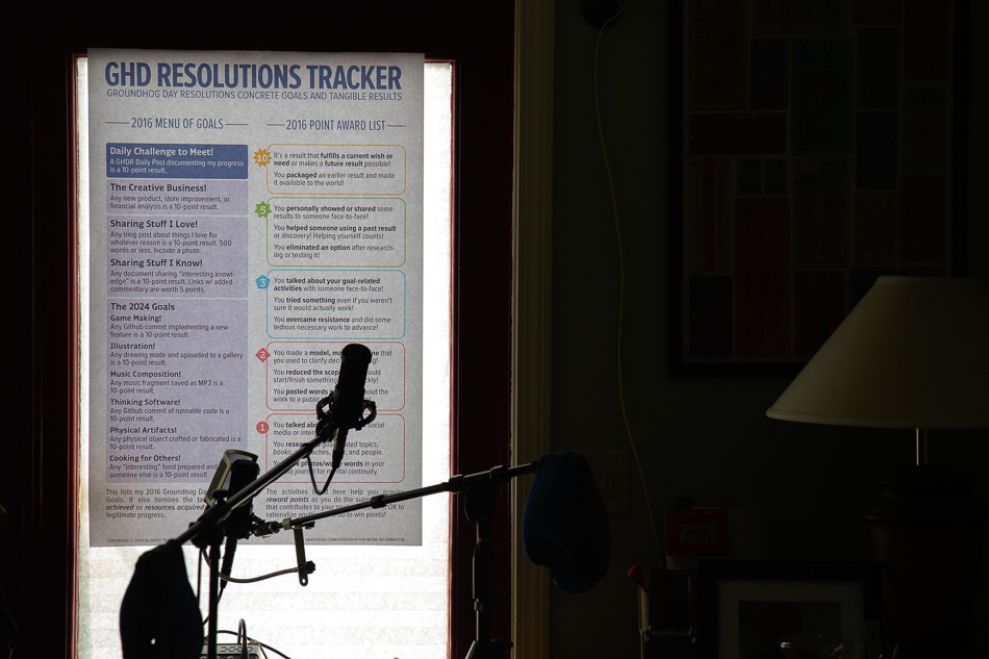