“When I’m rich,” I have told myself since I was 16, “I’ll buy some land and build an awesome creative facility with a gourmet kitchen, underground shooting range, helipad, a big barn full of tools, with guest house and outdoor firepits. There will be ultra high-speed internet, of course, and rooms full of books. I’ll invite my friends to come out and jam with me on projects, and we’ll make awesome stuff.” I figured I would need a couple million dollars to do it right, and since I don’t happen to have that kind of money lying around, it’s remained a pleasant dream.

It only occurred to me earlier this year that I’ve been deferring more of my dreams than I needed to. I’ve had more work this year to pay the bills, and so I’ve been thinking of doing some home improvements. My couches have been scratched to pieces by my cats, and the carpet must be 25 years old. Interior decorating, however, scares me. I really just want to be comfortable, have lots of light, and have high quality furniture. I can’t afford the kind of couches I’d love to have, and so my home has accumulated a hodge-podge of inexpensive pieces because I haven’t wanted to commit to a theme. And besides, these days I am spending all my time at coffee shops anyway.

But what if I could turn my living room into a coffee shop? Who says I need couches, console tables and easy chairs? I’d much rather have some small tables and chairs, some spot lighting, and accessible walls to hang artwork and other collectibles to share. I have a ton of stuff I’d love to display somewhere, my own version of the “Museum of Useful Things”. Turning my living room into a cafe would also solve my lack of a set for shooting product photography, and it would be a cool video conferencing backdrop. And, with small tables instead of large couches, I would have a 15×20 foot space where I could work on larger project, host co-working sessions, and maybe even teach some classes if I put a giant TV on the wall. This could be really cool…so this is going to be my first real quest for 2014: Operation Dave Cafe. 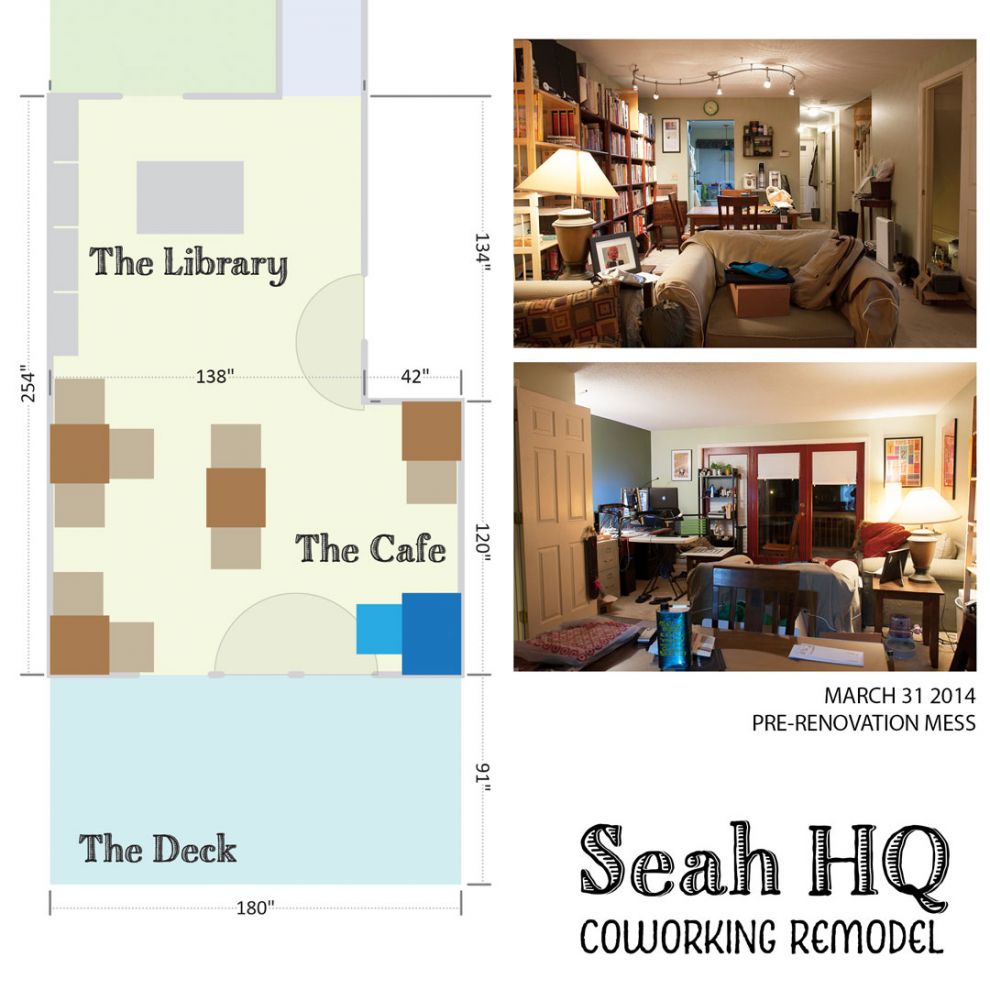 In the diagram above, you can see the dimensions of the space, and messy pictures of the way it is now. My couch and armchair are much too large for the space I have. I would get rid of them and then move the desk downstairs into the basement, to be replaced with smaller 26×26 square tables on cast iron bases, which are quite affordable when purchased from a restaurant supply store. I would reuse the existing wooden dining room chairs I have, which are pretty sturdy and attractive as is. I bought six of them last year for $65/chair, and I can buy two more for a total of eight to be split around up to 4 tables.

Over the next few months I’ll start doing more detailed pre-visualization and costing, posting the details somewhere on the blog. It would already be a huge improvement to get rid of the furniture and put in the hardwood floor; a fastidious wood-working friend of mine has said he’ll help, and he’s even fussier than me with regards to craftsmanship. More importantly, he has already done this kind of stuff. Then, it’s a matter of building the tables and maybe hanging some track lighting, and perhaps repainting the walls a lighter color and deciding what to put on them. It is going to be a while until I have the money to redo the floors, but since my condominium is not that large it may be more affordable than I originally thought.

It seems doable. I AM SO EXCITED!