Day 09-10: Dinner and Dentistry in Taichung 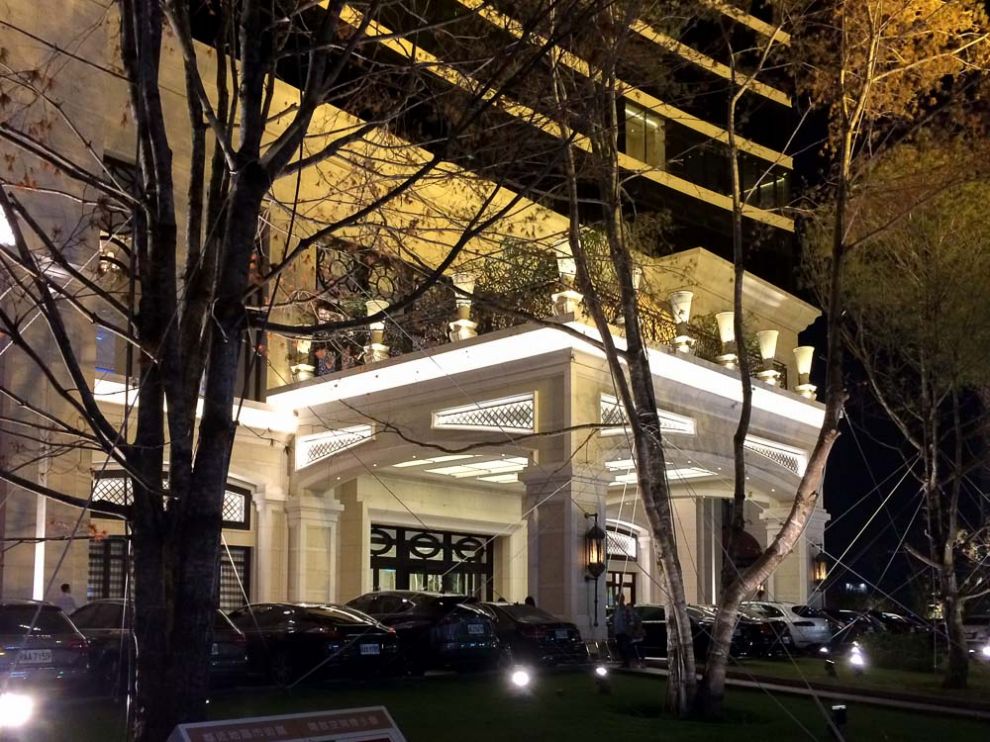 Monday, October 26, 2015. The past two days have been about getting ready for the dental implant operation I had scheduled for Monday morning at the Faith & Glory Dental Clinic, which happens to be run by my uncle Ezra here in Taichung. I remember when he first started his practice in Taichung back in the late 70s, his license to practice in California serving as credentials for a higher standard than perhaps was typical in Taiwan at that time. His first office had a chair that predated ultrasonic drilling, using actual mechanical pulleys to power the drill. It’s all quite different now! Lasers seem to be involved! Anyway, since a dental implant requires drilling into the jawbone followed by a lengthy healing process, Uncle invited Dad and I out to dinner at a luxury hotel called The Lin, as after the surgery I would not be able to chew anything for a while.

Dinner at The Lin Hotel

The Lin is located in a newer part of Taichung called West District, which according to Dad is only about 10-20 years old. It’s massively developed, with tall skyscrapers and premium brands all over the place. It’s apparently quite an expensive area to live in; Uncle said an apartment sells for over US$1,000,000.00. A lot of this development, Dad added, has been driven by real estate speculators from China, which have been given more direct access to Taiwan’s economy through deals by the current government. 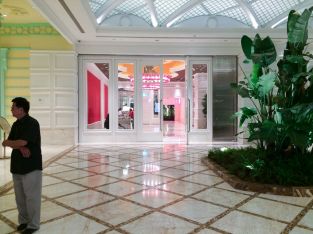 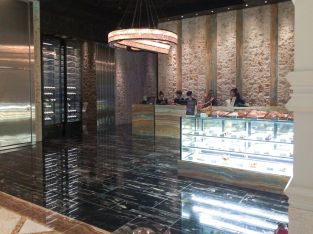 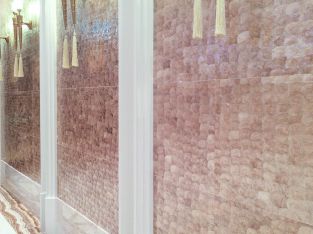 The Lin seemed to have all the markers I associate with fancy Asian hotels, though it’s been years since I’ve been in one. My memories of Taiwan hotels in the 80s and 90s were that they tried hard, but didn’t quite reach the level of a first class hotel in cleanliness, interior design, and amenities. That didn’t seem to be the case here, at least from what I saw of the lobby materials! Marble and exotic cut stone was everywhere; even the bathroom was tiled from floor-to-ceiling in semi-precious jade-like stone. One wall (above right) appeared to be made of abalone shell, a material that I usually associate with cheap export trinkets for tourists, but here more tastefully applied. I researched the hotel a bit afterwards, finding its rates around US$180 a night and up. I imagine the rates in Taipei would be higher. 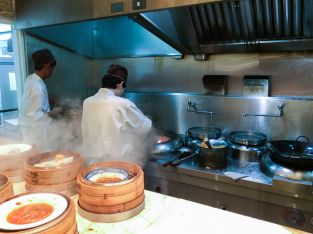 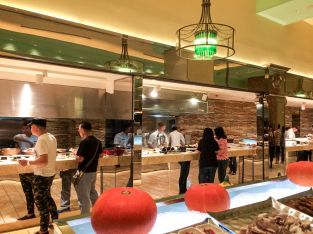 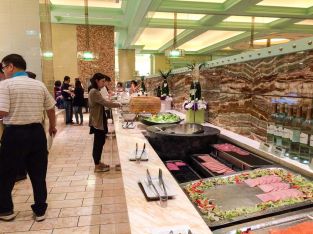 As Uncle parked the car, Auntie bought us our tickets for the all-you-can-eat “Las Vegas”-style buffet. I’ve never been to a Las Vegas buffet, so I would describe it as a bunch of manned stations featuring a particular type of food. I felt a little awkward taking pictures with so many people around, so unfortunately I don’t have a lot of pictures of the actual food, but it was plentiful and of good quality. I gravitated toward the stuff I miss the most, and a few new thing from the Chinese BBQ station, where I loaded up on favorites roast salted chicken, Peking duck, fried radish cakes, spicy pig ears, chicken livers, and steamed pork ribs. I passed on chicken feet, though…too gooey. I also had some decent sushi and roast beef, and some good bread. There was a long line for the lobster table, which I was all too happy to pass over because I don’t like shellfish of any kind; there’s something in it that makes me nauseous after a few bites. I also passed on the wine bar, which looked pretty popular.

The place was packed! Auntie explained that Sunday nights are very busy because in Taiwan because it’s the day off, which jibed with what Dad had mentioned to me earlier about Saturdays not being as busy because it is a work day. Although there apparently has been a governmental push for a 40-hour week, many Taiwanese work more hours and on Saturday. I would never make it here as a regular employee.

Auntie suggested that I go scope-out the buffet before making any decisions on what to get; we moved in teams of two so we could watch our belongings at the table. As I wandered around, I became aware that there were probably a mix of overseas Chinese and local Taiwanese. I saw more than a few people who I pegged as “American” from their t-shirts, tattoos, and the way they walked. There were people who I thought might be tourists or business people from China from the cut of their clothing, wearing nicer clothing but without the heaviness that premium Western fabrics tend to have. A few I thought might be from Hong Kong or Singapore, not fitting in either of the previous categories, more comfortable with being in the hotel setting with their nice watches. I really have no idea though. I wonder how I “read” to other people? I probably look pretty Taiwanese; over the past few days I’ve seen so many similar noses, ears, and bulbous noses and round heads that look like mine. Even my particular type of male pattern baldness seems to be in good company here in Taiwan. 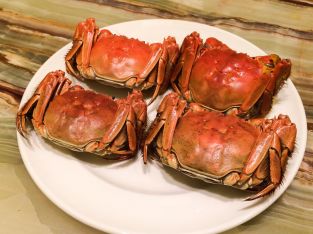 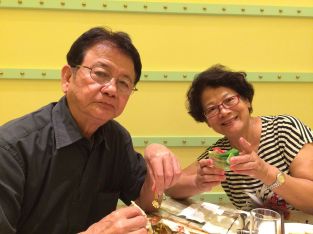 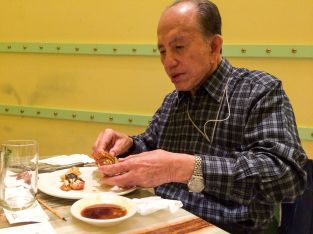 I was struck by the arrival of four perfect little crabs, which Dad thought were imported from China. I don’t like crab (averse to shellfish, remember), but I did want to eat one of these just because…well, look at them! Uncle started on his, pausing in his chewing just long enough to get a picture of him and Auntie. Dad approaches his crab methodically as he always does, maximizing his enjoyment of the dismembering. 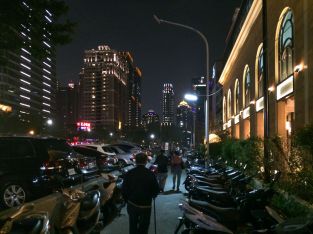 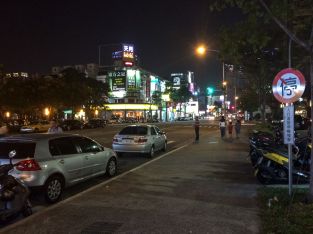 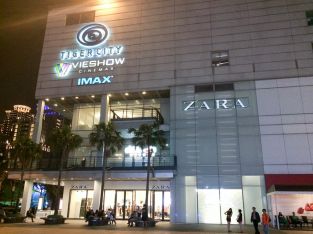 After more than eating our fill, we walked back to Tiger City, which is one of the shopping malls in the Taichung area. The first picture gives you a sense of the scale of buildings in this part of Taichung. The second picture shows the street outside the Lin, fairly wide and with a lot of shopping and eating attractions. The Tiger City mall, from the outside, seemed like it would be similar to a luxury goods mall like Copley Place in Boston’s Back Bay. Status-conscious Asians love name-brand luxury goods, as it is a big part of how they present their success to others.

After sleeping-off the huge meal, I went to the dental clinic to get ready for the operation. This is the second stage of the implant operation, as I had already had a bad tooth extracted in the States by another dentist five months ago. During that operation, the hole where the tooth had been was cleaned up—it was badly infected—and filled with bone grafting material. Now, my uncle would redrill the the site and put in a Bicon dental implant, which is basically like a metal socket screwed into my jaw. After another 4-5 months, the bone will have grown into and around the implant—promoting bone regeneration is a feature peculiar to Bicon’s implant design compared to the purely mechanical compression afforded by other systems—and serve as the foundation for which a custom-crafted tooth will be set. The Faith & Glory clinic has a full-blown dental lab upstairs, so they can handle everything on-site. Other than the size of the space, it’s pretty comparable to any U.S. dentist I’ve been in my home town: modern 3D X-ray scanning, dental laser drilling and treatment, and efficient operation. Of course this is my uncle I’m talking about so I may be a bit biased :-)

After a brief wait, I was ushered into one of the operating areas. Uncle conferred with his assistants for a while in Taiwanese as he decided on the best approach to take, using the 3D digital x-ray to examine the site. The procedure was pretty much the same as what I’ve experienced in the United States: injection of novocaine, open mouth after everything gets numb, and endure the peculiar sensation of having things hammered, drilled, and sewn inside your mouth. One thing that was new to me was the use of a hood over my head, just my mouth accessible. I’m not sure if this is so I wouldn’t see the copious amounts of blood and bits of bone that likely was being excavated in the name of dental health. I wouldn’t be surprised! In the previous dental surgery I’d had in the US, there was no such hood, but I couldn’t angle my head down to see what was going on anyway. I guess I’ve grown dispassionate about such surgeries. The worst part is ANTICIPATING pain, but since none is forthcoming when you’ve got novocaine numbing your entire mouth, relaxing is pretty much the way to go. After a while it starts to wear off and you can start to feel some light soreness, but it was on the order of digging one’s fingernail into the palm of the hand. If I had had any issue I could have raised my arm and just asked to be shot-up some more, but I just wanted the operation to be over as soon as possible. 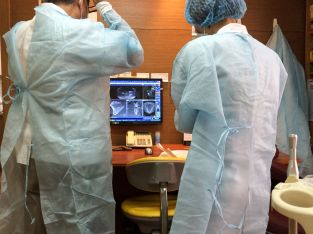 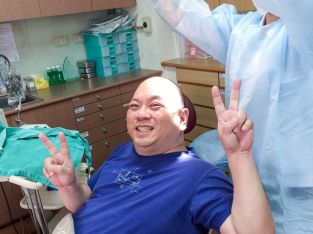 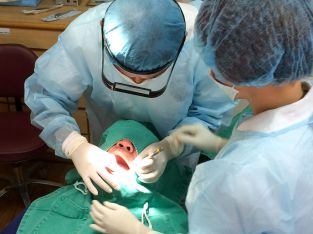 I was a bit surprised at how long the operation seemed to take. I had been mentally prepared for something on the order of 30 minutes total, the first 15 minutes related to anesthesia followed by some quick drilling, insertion of the implant socket, and then sewing up. When it was finally done, Uncle called me over to the followup X-ray of my implanted mouth to point out something he wanted me to tell my dentist. “There was a piece of tooth left over from an old extraction, but I moved the site so it is OK.” The piece of tooth I knew about from a previous visit to my previous dentist almost 10 years ago, a souvenir from an extremely difficult wisdom tooth extraction that had surprised everyone. When my rotten tooth (a different one) had been extracted, the dental surgeon had noted the wisdom tooth fragment and didn’t think it would be a problem. However, I was wondering what this had to do with the implant because…oh wait, you put TWO implants in? That was why the operation had taken longer! So now I am going to be back up to a full set of teeth.

After confirming the antibiotic and mouth sanitation regimen with the clinic staff using my broken Chinese and English, I slept. I took the painkillers right away before lying down and letting the healing begin, but haven’t needed them since. I’m only able to eat soft foods for the next week or two as the wounds heal and the implants start to set in the bone, but Dad has been spoiling me with an astonishing array of soft cakes, fruit milks, braised pork stews, watermelons, onion bread treats, and juices. He seems to be enjoying his role as caretaker, and I’m really happy and blessed to have this time with him.