Day 14: In Search of Taiwanese Breakfast 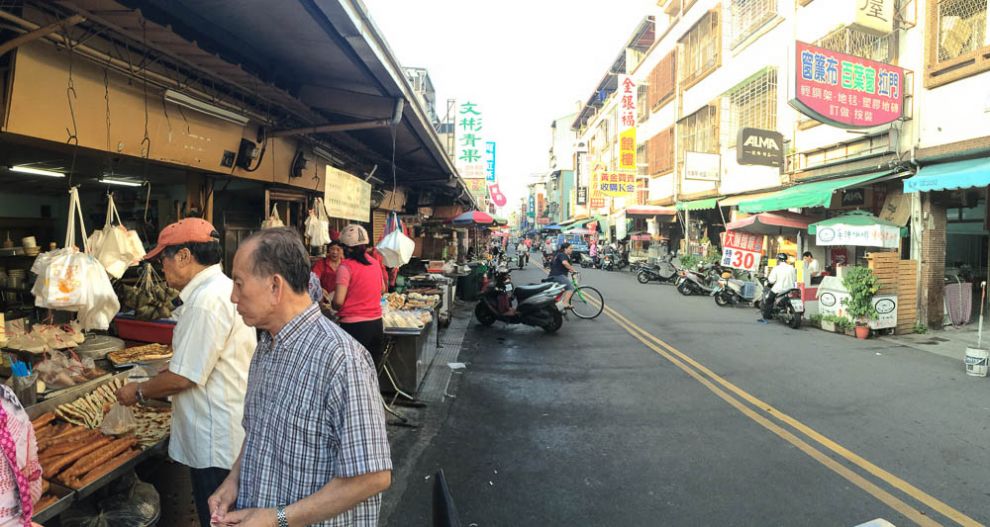 Friday, October 30, 2015 Dad got me up early to take me on an early morning walk to the nearby market street, because he wanted me to see the “swarming people” that all went to this particular Taiwanese breakfast street restaurant. I hadn’t realized before this trip that Dad was quite unfamiliar with it; a few days earlier when I had mentioned to Dad that I was excited to have some genuine shaobing youtiao, he had asked one of our relatives where to get it and and had gone to this particular place. He had been AMAZED at how many people were up early and lined up to buy oily fried sticks of bread stuffed between baked flatbread. This breakfast, while extremely popular in Taiwan, is not really a “Taiwanese” tradition that he grew up with. Apparently it came over from the Mainland when the Nationalists had lost the Chinese Civil War in 1947, and the largely uneducated soldiers who made it over had to do something to make a living. A lot of them started street food stalls based on their own provincial cooking traditions back in China. It’s part of what makes Taiwan such an interesting place to eat. Dad had been particularly surprised at how much one package of shaobing youtiao w/ dou jiang (bean milk) cost: around 60NT or US2.00! But I am getting ahead of the story… 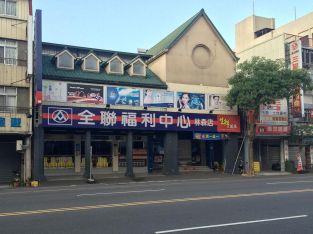 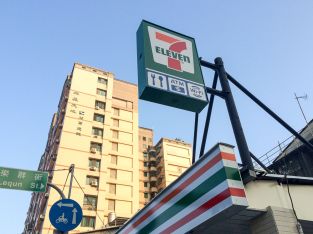 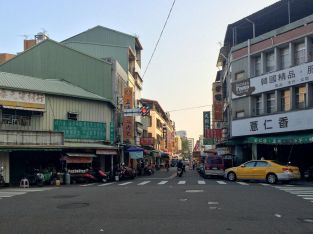 We left the house around 630AM, and the streets were eerily quiet. We went west on Lisen Road toward the Japanese restaurant that Dad didn’t have a high opinion. It was closed, but I took a picture of it anyway because I like the way it looks. Dad’s local supermarket was also closed; from the outside I would not have guessed it was one with all the lights off.

Walking further than we had gone before on previous walks, I encountered the closest 7-Eleven store to our house. In the US this is nothing to really celebrate, but in Taiwan this convenience store chain is a highly-evolved part of the fabric of modern life on the island. Here you can pay bills, get pictures printed, top-off various electronic payment cards, get a cell-phone dataplan, buy a variety of delicious traditional snacks, and get free wi-fi. Finding the closest such store was a critical part of my “live in Taiwan” research program…and here it was!

We didn’t go in, though, but it did mark the intersection of Lisen Road and Luqun Street, which is apparently the local street market in this neighborhood, just after a Korean restaurant of unknown quality. 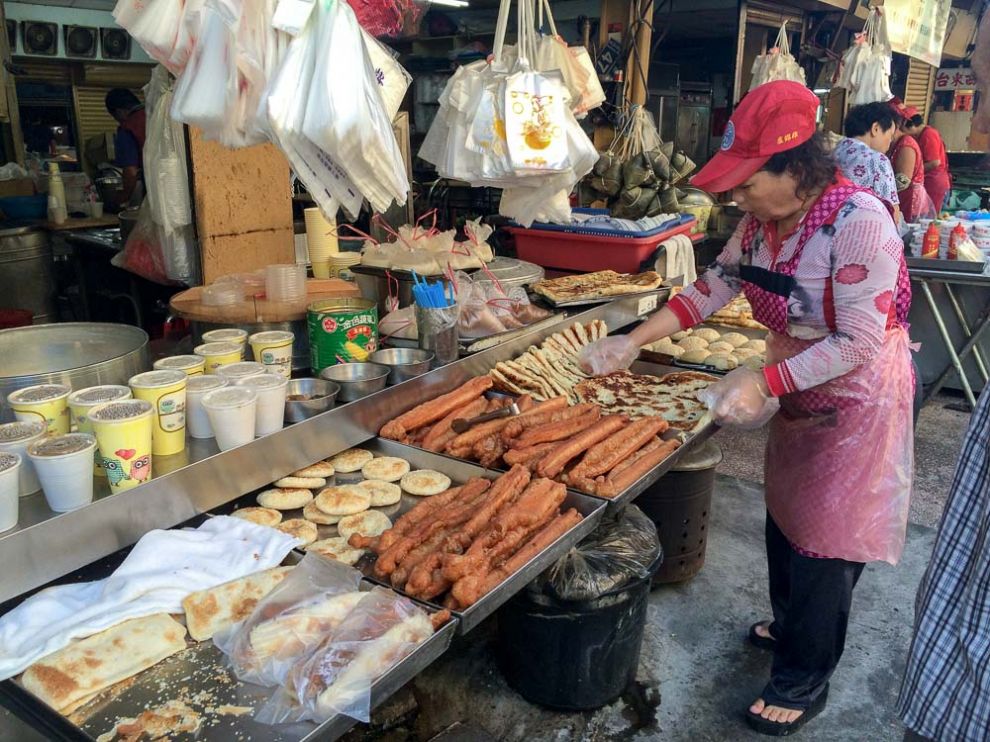 Behold! The motherland of breakfast! The shaobing is the flat rectangular bread on the left, and the youtiao (literally, “oil stick” I believe) are the long brown rods freshly fried nearby. The round things near it is something else. The dou jiang (literally “bean milk”) is in the cups nearbye. Near the vendor’s head you can also see a bundle of Jungdz (ba tsang in Taiwanese), which is exciting in itself…I hadn’t noticed it before! 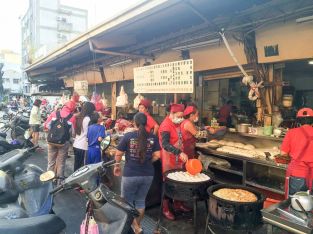 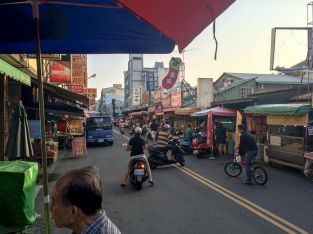 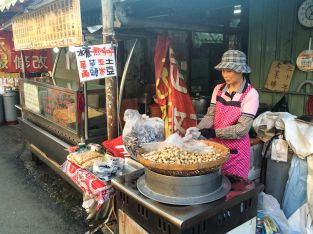 Dad stood in line and collected two bags of shaobing youtiao, along with a couple of things that the vendor just gave to him. We’d arrived kind of early before the crush of traffic; many of the stalls were just setting up. Dad picked up a small bag of fresh steamed water chestnuts, which are nothing like the horrible canned things we get in cheap Chinese restaurants back in the States. Dad bought a few guavas from a fruit vendor and some pretty good pork buns fresh out of the bamboo steamer. Ah! 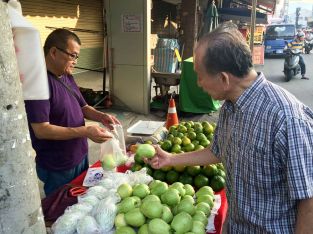 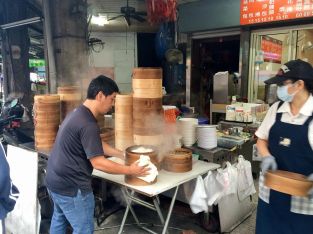 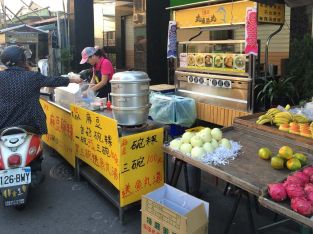 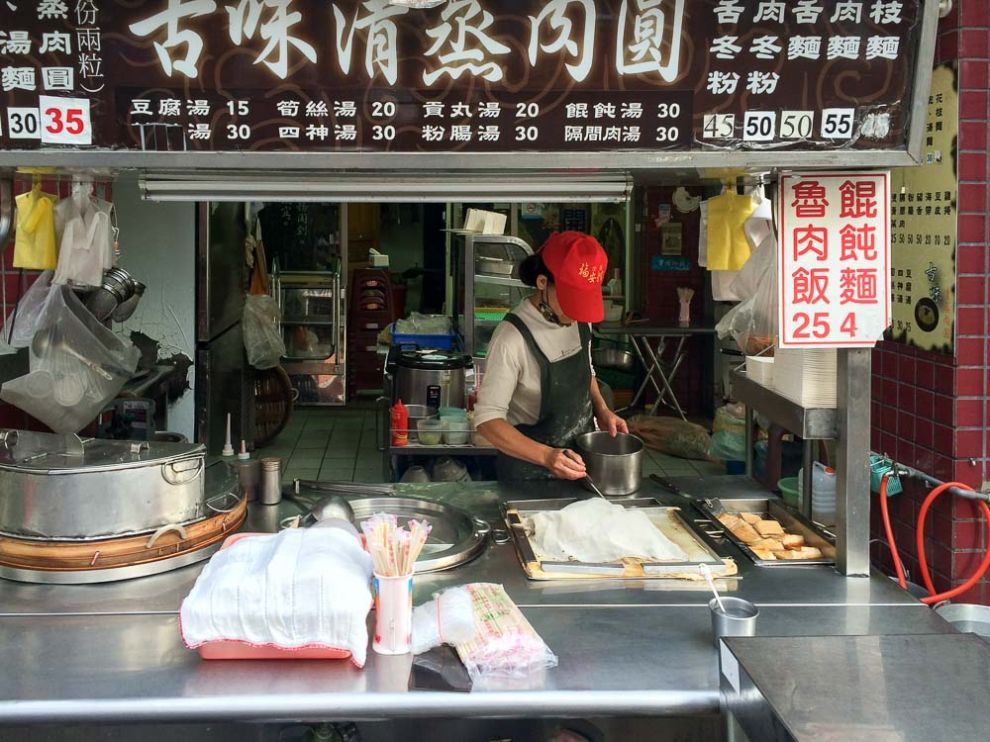 There were a few things I couldn’t identify. The one with the yellow signs (which I can’t read) seemed to be some kind of fish meatball vendor, specializing in some kind of soup in a bowl; to the right is a fruit stall showing a few interesting just-picked melons, tiny bananas, fresh persimmons, and dragon fruit. The large image is of a stall that Dad says sells noodles, braised pork rice, and ba-wan: traditional lunch foods, I gather! I’ve had a few of them before. 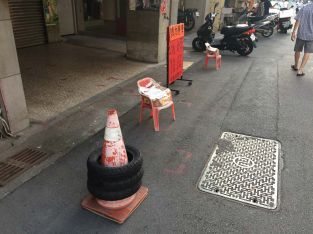 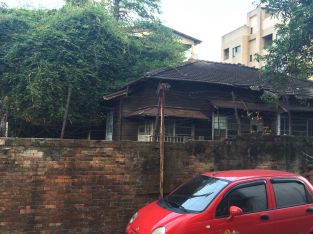 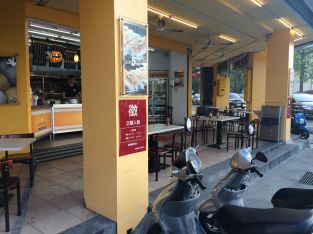 On the way out from the market (which was only about a 7-minute walk), I noticed this reserved parking setup that reminded me of Boston during a snowstorm, when residents of the city feel that they can rightfully claim a space that they themselves have spent hours chipping out of hard-packed ice. Dad explained that this area was where a store would later put-out its wares for sale, so they didn’t want motor scooters parking there.

We passed by this old Japanese-era house. Dad noted that this part of Taichung used to be occupied by the homes of Japanese guards. There are still quite a few of these old properties around. I believe that all Japanese that did not have a technical or scientific profession were repatriated to Japan, though apparently these wansei didn’t have the best time of it. The properties were seized by the Chinese Nationalists then distributed among themselves.

I noted that the nearby breakfast place, which we’ve been warned was not very good, had not yet opened. Still I would like to try their food just to compare. Was it really that awful? 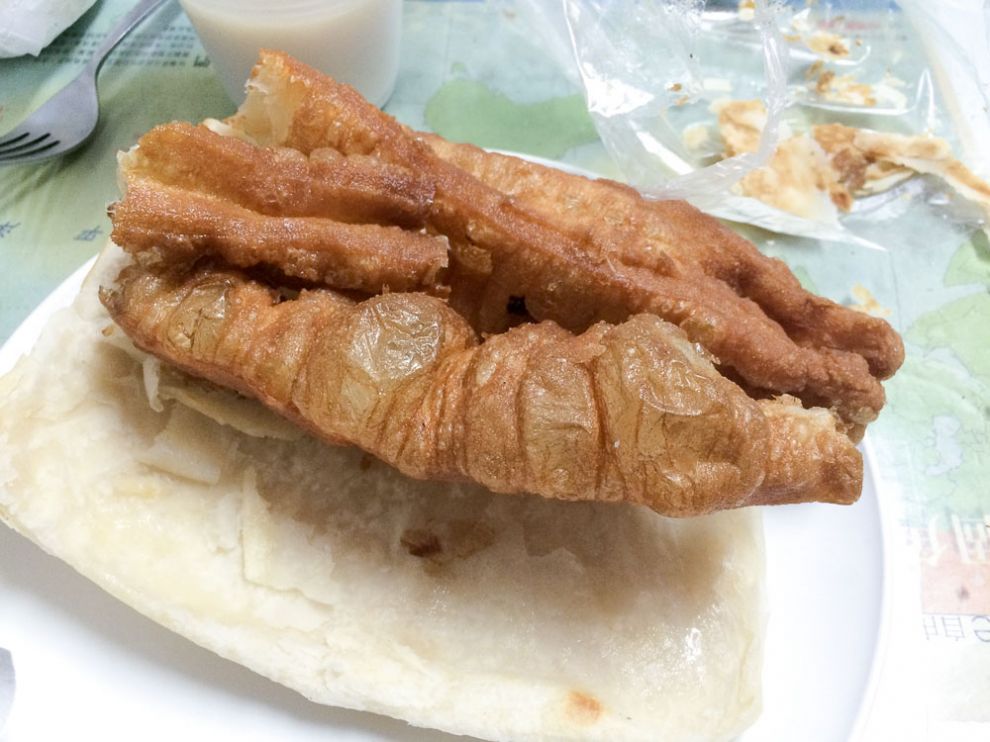 Finally arriving home, we dug into our shaobing youtiao! They were very crunchy, perhaps too much so, and shattered when we bit into them. I wasn’t really that impressed. The bean milk wasn’t bad, sweeter and creamier than some I’ve had (particularly compared to the canned stuff I usually have to settle for in the States). It didn’t make me all that happy, overall, but I was glad to have been able to go with Dad and get it. The start of a good day!