Day 13: Journey to the West (of Taichung City) 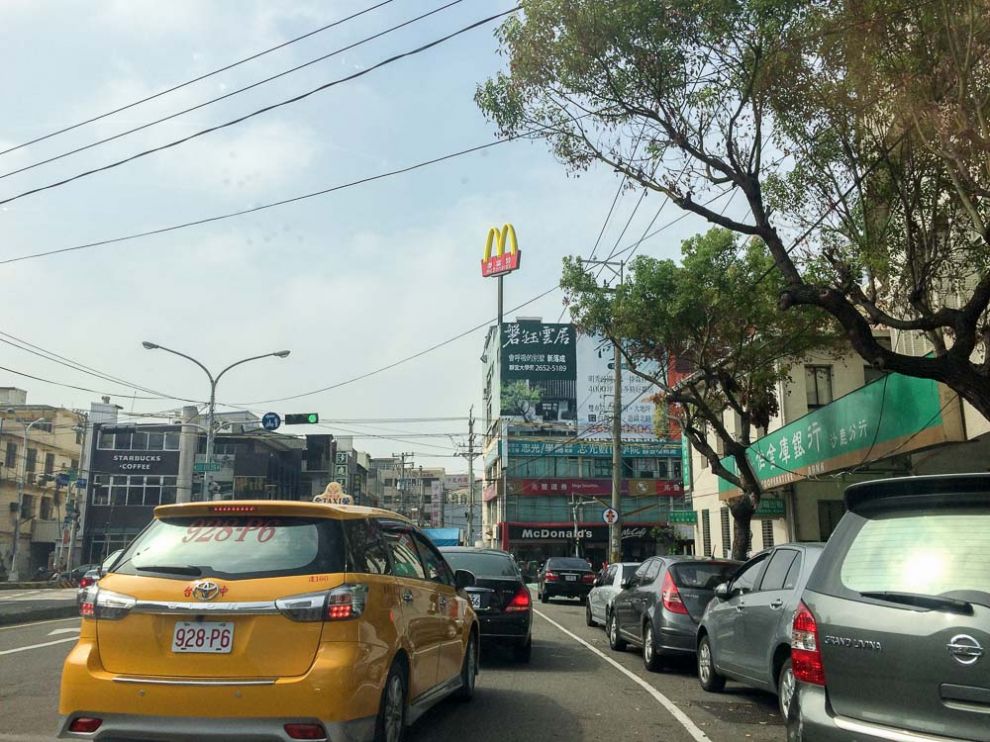 Thursday, October 29, 2015. We went to visit my Uncle’s house (“condominium” might be more accurate) more than 20 minutes drive to the west of my dad’s place. I was curious to see how different things would be away from the old city center, thinking it might be more rural, but there is no escaping Starbucks or McDonalds. Starbucks has a significant presence here, though coffee in Taiwan goes back quite far, beginning with introduction by the Dutch in the 1600s and then by the Japanese in the early 1900s; today, Taiwan is starting to become known as a world-class coffee city. The history of McDonald’s in Taiwan goes back to the mid-eighties, and I believe was one of the very first foreign franchised allowed to operate in the pre-democratic protectionist economy laboring under martial law. I was attending Taipei American School at the time, and one of my friends was the son of the lawyer who made the deal happen. There was much celebration among us expatriate kids, because it was incredibly difficult to find a decent hamburger in Taiwan at the time. 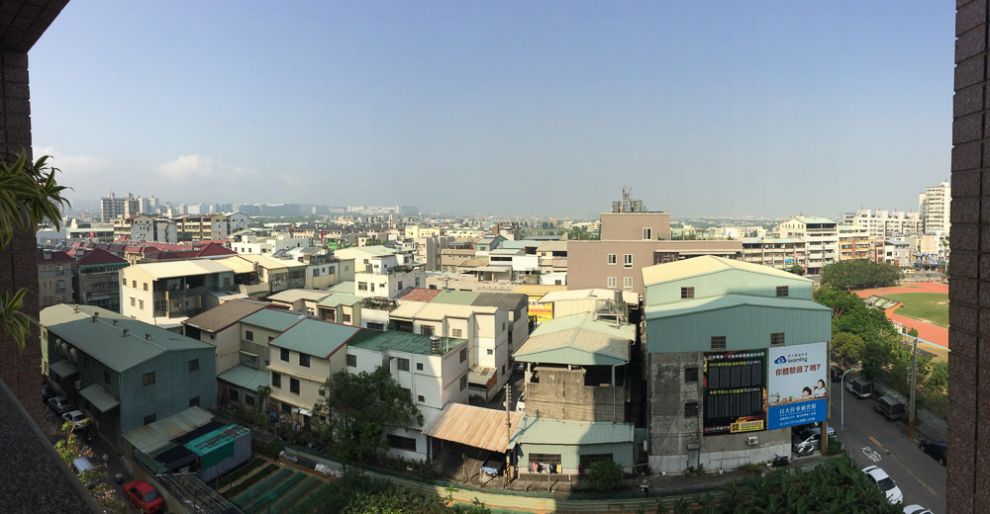 The view from Uncle’s balcony was interesting, showing a combination of residential housing with Taichung (I think) in the distance. I’m not sure exactly where we are. I think this is a more recent development, though not as new as some of the buildings we saw further west toward Taichung Harbor, a major port in central Taiwan. We drove around to find something to eat, and when I mentioned that one of my favorite foods was paigu fan (porkchop rice), Uncle drove us to find some. 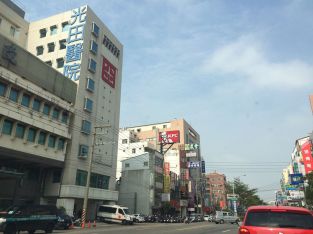 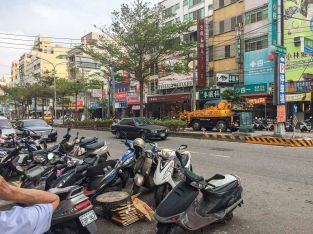 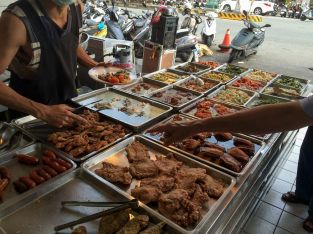 We parked across from a hospital that Uncle used to teach at. There was an unassuming street restaurant right next door that was frequented by hospital staff looking for a quick inexpensive meal. Almost all food in Taiwan is inexpensive, so eating out is quite affordable. 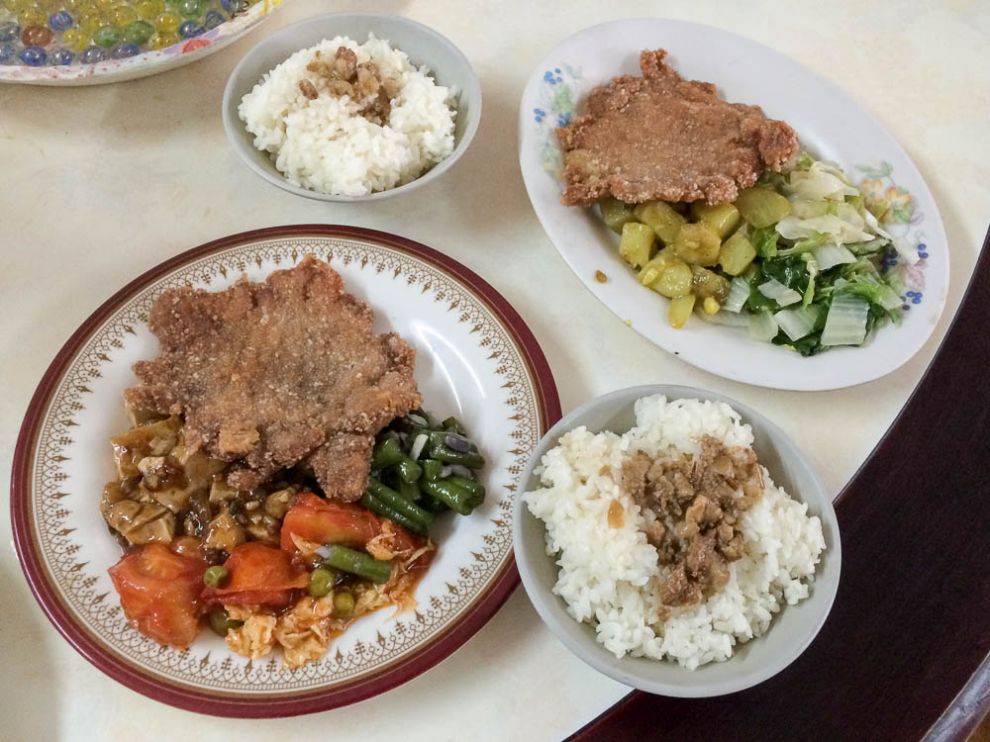 Our meal for the three of us, which consisted of three plates of porkchops, bowls of soup, and a bowl of braised pork rice, came out to something like US$2.00 per person. This was the first time, incidentally, that I was brave enough to try the fabled pork blood soup that I’d assiduously avoided as a kid. It really didn’t taste like anything. The coagulated pig’s blood is cut up into cubes, and was remarkably mild. It tasted more like firm tofu in a salty broth, despite its livery coloring. I wouldn’t say I LOVED it, though I’d certainly taste it at another restaurant to see if it’s any different. Uncle said that it’s one of his favorites. 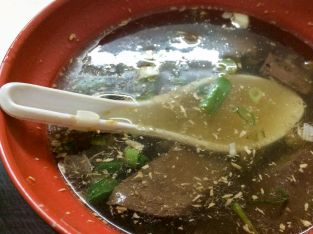 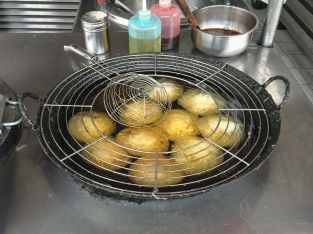 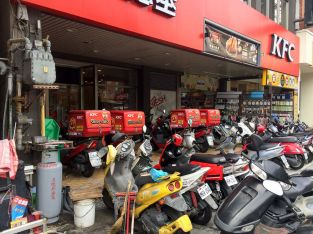 As we were leaving, Dad pointed out a stand where some ba-wan, a kind of gelatinous meat dumpling that I hadn’t had in a long time. In fact, I didn’t remember what they tasted like at all. I’ve been curious about them anew since seeing a recipe for them; Uncle promised he would take us out to go have some over the weekend. They’re considered one of Taiwan’s national foods, and nearby Chang Hwa City is apparently the most famous for them. My sister reminded me that our mother really liked ba-wan too; when I related this back to Dad, he told me a story of how he had treated her to her first ba-wan when she was visiting Taichung for some school-related trip when they were both still kids. Maybe that’s why Mom liked them so much!

I happened to notice the KFC franchise next to the restaurant, which appeared to have delivery scooters. I was utterly charmed. The sheer population density here makes all kinds of business operations possible, though one of the major downsides is the amount of air pollution. It’s not as bad as China, which regularly “exports” huge clouds of deadly particulates to its neighbors, but it does cover everything with a kind of sooty crime. Face masks and air purifiers are pretty popular here. 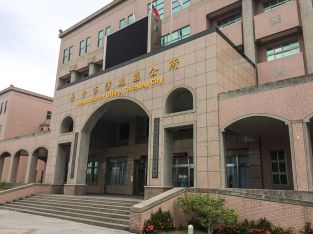 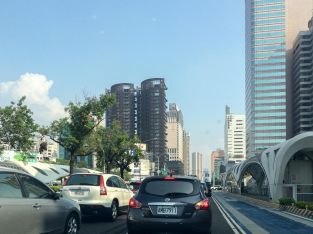 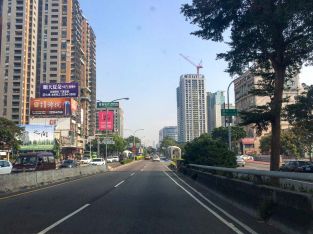 On the way home, Uncle stopped by to do an errand at a government building, so I asked if I could come in and look around. The function of this building appeared to be for matters related to resident benefits, though I’m not really sure why. As Uncle is a senior, he was eligible for a yearly “birthday gift” from the government of about 2000NT (US$70), which he received in a red envelope as one might expect; this is how gifts of money are presented in a lot of Asian cultures.

And with that, we headed back toward Dad’s house along Wuquan Road, one of the major thoroughfares in Taichung City. It’s dotted with big hotels, department stores, high-end boutiques, fashionable eateries, and everything else in-between. Uncle noted that several of the biggest buildings were the result of non-Taiwanese investment into the tourism industry; China is Taiwan’s biggest source of tourists (4 million visitors in 2014), and there is a lot of money to be made. My dad mentioned that the loosened economic controls with China were something of an attempt by the currently-ruling Kuomingtang Party (KMT) quietly weaken Taiwan’s resolve toward maintaining independence. This is a big issue here (Dad is very pro-Taiwan independence as opposed to unification with China) and in the upcoming January 2016 elections it’s expected that the rival Democratic Progressive Party (DPP) is going to upset the KMT and take control. This is a rather exciting and scary time to be Taiwanese, as its nascent democracy (only about 25 years old) has had a rocky start. Taiwan politics has been known overseas primarily for stories about rival legislators getting into fistfights, but to my dad’s delight it is the young people of Taiwan rallying to protect their interests. The Sunflower Movement was (as far as I know) an unprecedented “Occupy“-style action taken by university students, using social media to effectively made their case heard not only locally, but internationally as well. As Dad was one of the key members of the General Assembly of the Presbyterian Church in Taiwan that drafted A Declaration on Human Rights by the Presbyterian Church in Taiwan during the time of the White Terror suppression of suspected political dissidents, I can imagine that he’s happy to see his dream of an independent Taiwan taken up by this generation despite the clouds of uncertainty (namely, a military invasion by China) that threaten the island after the election.