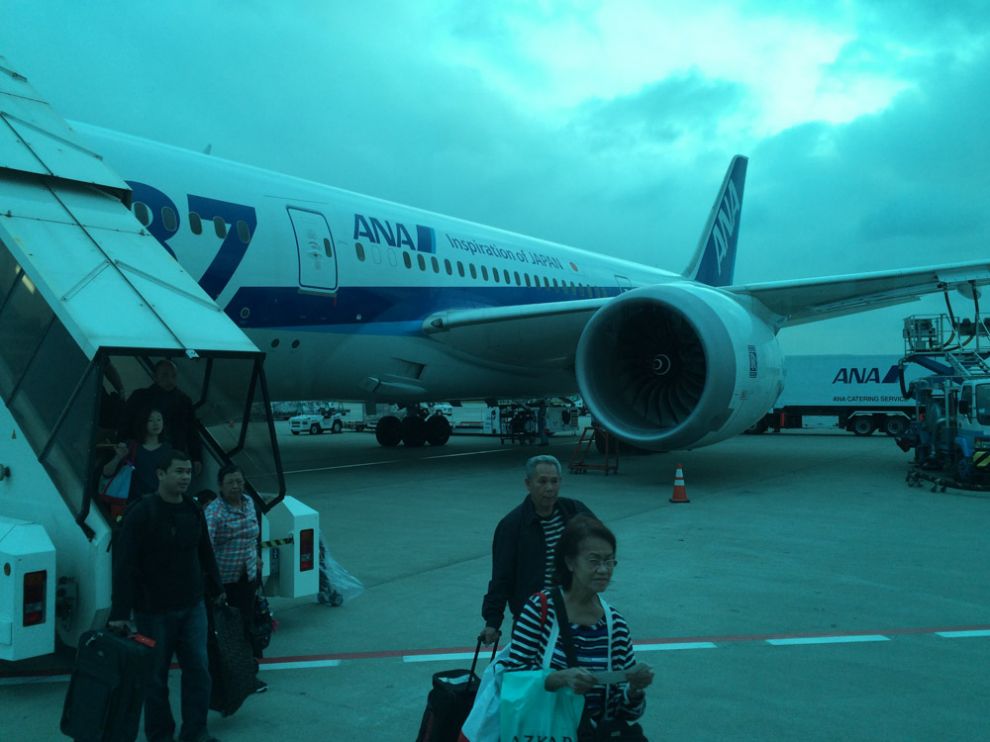 Wednesday, October 21, 2015. It feels somewhat omenous to be traveling to Taiwan today, as it is Back to the Future Day and the year 1985 was around the time I last lived there. When I graduated from Taipei American School in 1986, I was all too happy to come back to the United States. When I lived in Taiwan as a teen, I had a mixed-up sense of identity. Am I Taiwanese? I’m not like the Taiwanese who grew up here. Am I American? I was what is now called a Third Culture Kid” internationalized to the extent that my core pre-teen through teen experienced didn’t match up with most Americans back in the States. I had clung to “American” as my identity, which helped me cope with my poor language pick-up skills. And so now I’m heading back for the first time by myself since 1987, by my own volition. I’m trying to maintain a positive attitude, but the childhood reactions are dug-in pretty deep! I’m telling myself to remember to smile and be happy to be there, which I think I can do, though my insides are churning with ill-defined concerns.

The All Nippon Airline Experience!

I’m flying back on an airline I have not flown before, All Nippon Airlines (ANA). It’s consistently one of the top ten airlines in the world, and I thought I might get a different experience compared to a US-based carrier like Delta or United. When I’m flying domestic in the USA, I always fly Southwest Airlines because the people who run it always are energetic and positive, which puts me in a good mood. They’re not regarded as a 5-star airline, but the experience certainly beats what I’ve witnessed on other carriers.

Even before boarding, the ANA experience has been pleasant. The Japanese staff have been unfailingly conscientious in all their interactions, and it’s really nice. The 787 was experiencing some mechanical problems, so the boarding time was pushed back by 40 minutes. To ensure that everyone knew this, the counter staff walked around with little signs that said, in Japanese and English, that the boarding time had been changed, bowing to each person and making sure we are all informed of the change. 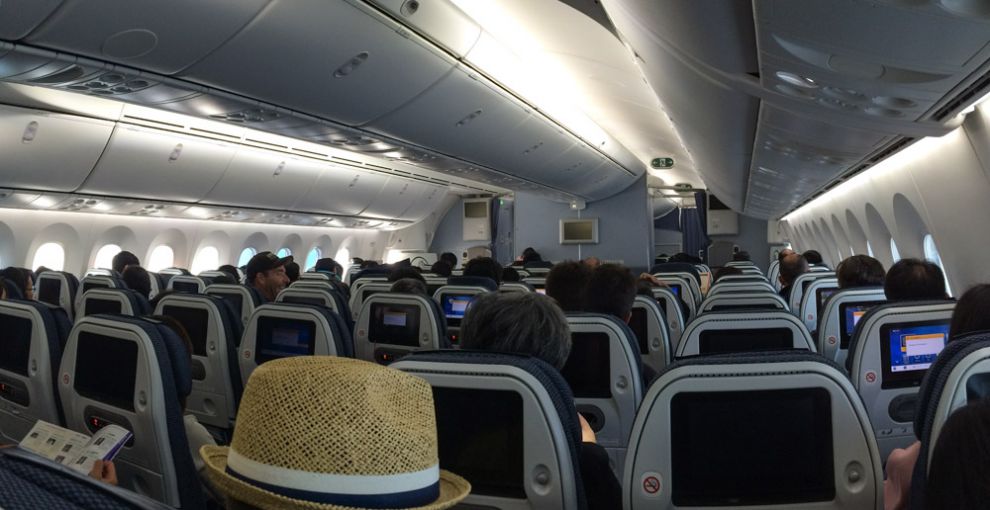 This was my first time on a new Boeing 787 Dreamliner, and at first it didn’t seem that remarkable. It was very clean and very new, and featured larger self-dimming windows. It was only on the second leg of the flight from Narita to Taipei Taoyuan International Airport that I noticed the key differences in technology:

It’s been awhile since I’ve had a meal on an airline, and I was curious about ANA’s offerings. There were generally two entrees offered for the two meals: a western-style one (Hungarian Goulash) and a Japanese-style one (salmon and cold soba noodles). It wasn’t bad. I opted for the Japanese choice for dinner, and I forget what I had for breakfast. On the Japan-to-Taiwan leg, we were served another meal, and I opted for the Western-style curry cutlet, which was not that great but I still love curry anyway! For the first meal, there was even a small tub of vanilla ice cream that was incredibly dense…no air bubbles at all! I wondered if dense ice cream is a thing in Japan, or maybe these were just melted at some point and refrozen. 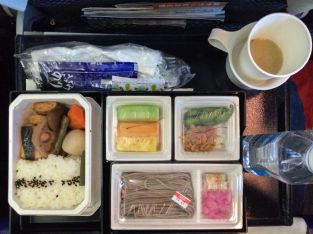 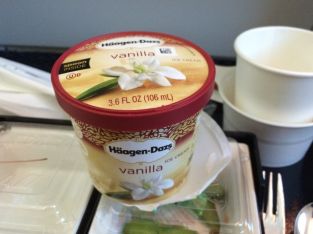 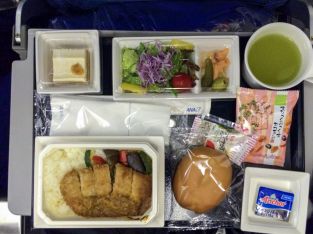 Overall? The experience was pretty decent. I flew Economy, so I wasn’t expecting a tremendous level of service, but every transaction was quite pleasant. The seats in Premium Economy were much more spacious, but cost a lot more and didn’t seem worth it to me. The downside really came to other passengers with very loud children, which made it impossible to sleep. I also happened to have picked a window seat that had a very large gap next to it, in the very last row. While this gave me a lot of room, it also meant I couldn’t lean against the wall to sleep. I forgot to pack some decent wired earbuds, and I should have brought some ear plugs. It just occurred to me that I could have asked for them…maybe on the way back I’ll check into that. 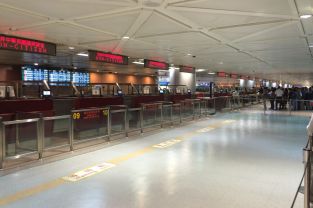 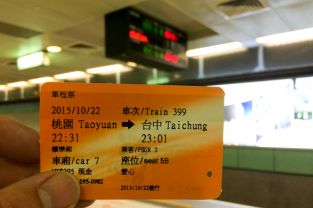 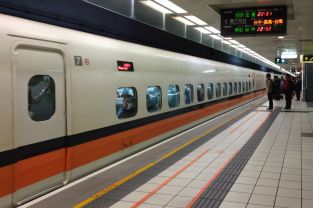 Dad met me at the airport, having arrived a bit early so he wouldn’t miss my 8:45PM arrival. Unfortunately, we had forgotten that an 8:45PM arrival time means a two-hour wait to get through immigrations. The photo above to the left doesn’t really do the line justice, but I didn’t want to take a picture of the people in front of me in case it made them feel nervous. I was surprised just how many people were flying in. A good proportion of the crowd were visitors from China, presumably there to go on tours of the mysterious Taiwan democracy just off their shores or to conduct business.

The process took so long that by the time I got through immigration (which once I had gotten to the end took only about 30 seconds with my US passport and prior visitor history), my checked luggage was no longer on any baggage claims or listed anywhere. There were so many flights coming in that they just offloaded the luggage to the side, and a helpful airport guard showed me where to go.

Once I got out, I saw Dad waiting patiently, and we bought a bus ticket for 15NT (about 50 cents) from the airport to the nearest High Speed Rail station. Taiwan is a little larger than the state of Maryland, roughly 245 miles long by 80 miles wide. In the days before high-speed rail, it would take about two hours to drive from Taoyuan International Airport to Taichung; now it’s about 30 minutes by rail. The stations are clean and modern, and there’s quite a bit of English signage. Next time I fly to Taiwan, I’ll likely take the transportation myself to save Dad a troublesome trip and long wait, though I won’t get Dad’s senior citizen discount. The cost of my ticket was 299NTD, or a little less than US$10 dollars. It might be more like US$20 at a regular fare. In general, the cost of living in Taiwan is much lower than the US from what I can tell. More on that in a future post!

I’m a bit behind on my updates…it’s been been amazing how much time just catching up with Dad, drinking tea, and going on little errands takes up. I may switch to a topical format over the day-based format…we’ll see! Thanks for following along!