Monday, October 19, 2015. While I’m waiting for my flight on Wednesday, this is a good time to work with my cousin Ben on our interactive project with UCLA/IU. I don’t have a motion tracker rig at home, but Ben has one, so we were able to track down a bug that only appeared on Windows systems that used tracker data. It ended being an issue with how we were processing data using an old hack, so once we figured out that was the problem we were able to fix it. 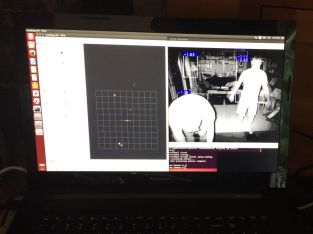 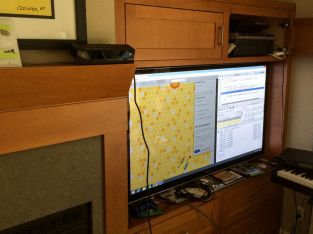 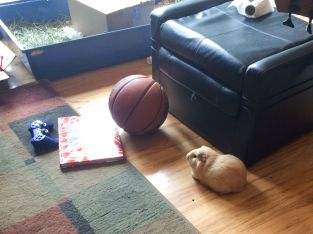 Next, we also talked a bit about the next phase of development now that we have a critical mass of supporting systems to start building real activities. A lot of these new systems, such as our behavior-tree based “AI”, takes some getting used to; I’m not even 100% clear on the best way to use it. So we just talked through it, face-to-face, and came to a general understanding. It will be interesting to see if I can work on these systems while I’m in Taiwan, as I will not have the luxury of my multiple-monitor setup. In fact, I’m finding it challenging just finding a table and chair to put my laptop on as I travel, which creates neck and arm strain issues as I work. I guess I’ll find out when I get there.

On a side note, there are guinea pigs in the house (above right). I’ve never observed one for a long period of time, and they are much more active than I had thought. They even make funny chirping noises that sound like a broken water pump. They are kind of cute, though it just makes me miss my cats more. 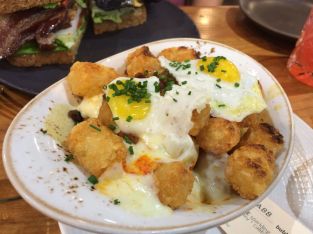 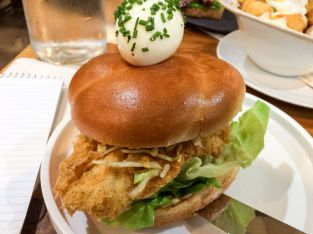 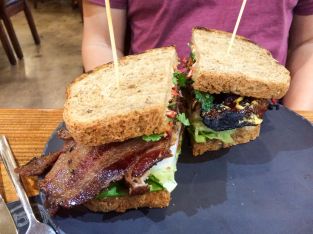 Since these were working days, it was also a good excuse to have a good business lunch. There’s a place called Orchard City Kitchen in the nearby mall known as “The Pruneyard” that is run by Michelin-starred Chef Jeffrey Stout. We ordered a bunch of sandwiches and appetizers, and found them to be pretty great. Presentation was nice, and the flavors were nicely balanced and unique. I was very pleased that there was cilantro in my sandwich. I would go again!

Finishing up, I had an insight about how to hold my new iPhone 5S—yes, I finally caved-in and replaced my RAZR3 flip phone—when taking pictures. Rather than hold the phone daintily at the corners as I had been doing, I realized that I could grip it right in the middle because the lens is located in the corner (above-left). This gave me a much firmer grip. Next, I positioned my right hand so I could put some light tension pulling on the back of the camera, thumb positioned over the on-screen shutter button, using a bit of push-pull force. When I shared my theory with cousin Ben, he commented that it looked like I was holding a gun, and I indeed it does have similarities to how I shoot with handguns and digital SLR cameras. I happen to have learned to shoot using the Weaver stance, which puts a bit of forward-to-back tension on the device you are stabilizing and aiming using both hands. It’s funny how skills learned in one area cross over into others! 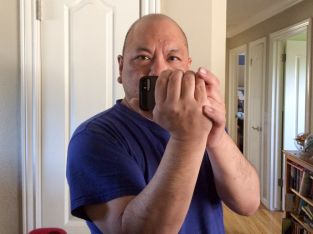 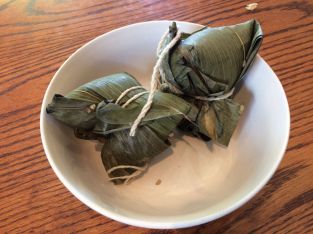 As my thoughts turn toward tomorrow’s flight to Taiwan via Japan, it seemed quite appropriate to eat some bah-tzang, a bundle of glutinous rice mixed with stewed pork and mushrooms wrapped in a big bamboo leaf. According to my aunt, this style of preparation was an old way of preparing a lot of lunches that would keep without refrigeration for up to 5 days, which is a big deal in the subtropical heat of Taiwan. Today, they’re mostly made for festivals and family gatherings that need that traditional Taiwanese touch; I was looking forward to trying some so I could compare how they tasted to what I hoped to have in Taiwan.

I’ve been reading a bit about Taiwan through Wood Egg’s Taiwan 2014 New Information and Cultural Insights Entrepreneurs Need to Start a Business in Taiwan, one of several guides that the company (founded by Derek Sivers) offers. While I’m not thinking about starting a business in Taiwan, the guide is oriented toward foreigners who want to understand the people of Taiwan and their culture. I’m basically a foreigner that looks Taiwanese, which is sometimes a trigger for disdain from the locals. When I was a kid living there, this made me feel very dumb and unwelcome. The ebook confirmed the attitude, but also helped me understand the context. I’m determined to make a positive go of it, and armed with a better understanding of what makes the Taiwanese mind tick, I might have a better time dealing with it.

Tomorrow’s flight from San Jose to Narita, and then onward to the Taoyuan International Airport will take nearly 24 hours of travel time, 19 hours of which will be in the air. I’m hoping that the seats I picked at the very back of the plane were not the huge mistake that Seat Guru, a website that collects passenger opinions about airline seating, seems to suggest. Dad’s going to meet me at the airport, and I’ll hopefully learn how to get to the house by myself so he doesn’t have to do that in the future.