Earlier I wrote about making June into a month of producing, with a corresponding commitment to track where the time is going. Instead of tracking time by task, though, I just want to know if I’m CONSUMING (that is, just taking in stuff) or PRODUCING (actually making or synthesizing something new). 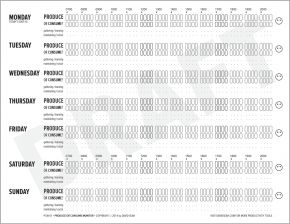 This form is based on the Emergent Task Timer (ETT), a form that I sometimes use to track time on a task-by-task basis. However, there are some key differences.

I drew this from scratch over a couple hours at Starbucks, but already I seem some issues that I’ll want to address later. Most notably is the lack of space for recording context, and the need to actually record a 24-hour track to also catch sleeping schedule.

However, you can download this draft if you’re so-inclined: