I somehow made it through the entire week without writing a blog post about the daily grind as I measure my production versus consumption ratio. I’m just about to wrap up the month of data monitoring, so I thought it would be interesting to look at the week as a whole: 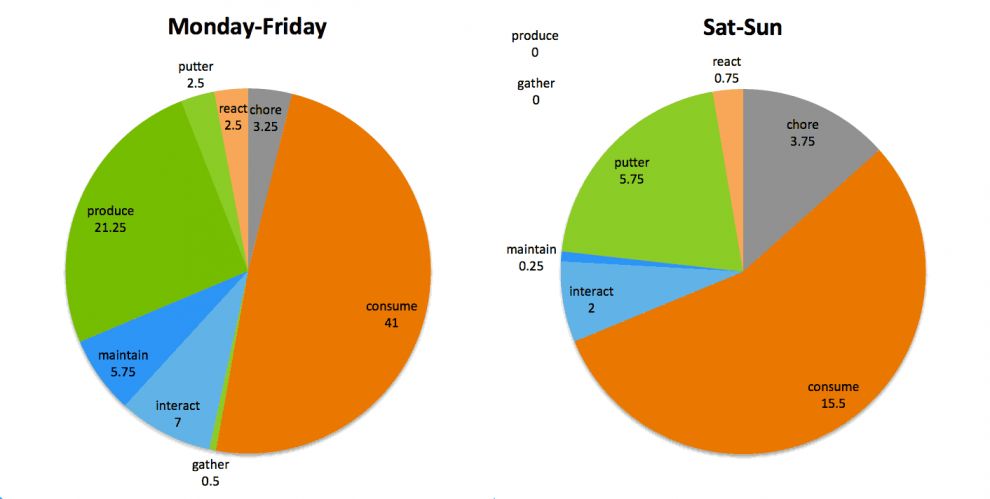 Here’s the same data, presented as a complete week:

Here, I’ve broken out the the totals of my main categories compared to the totals with game time separated out from the overall consuming time. You can see that it’s taken an enormous amount of my time out of the total 111.75 hours I was awake during the week, over a third of my time. I’ve mostly been playing it after hours, but have been staying up way too late (to 3AM-4AM). However, I wouldn’t characterize the amount of time spent as a complete waste for the following reasons:

So in general, the game is giving me an unexpected opportunity to explore the trinity of Identity, Community, and Inclusion, which are three themes that are very much part of my personal core. Learning how to join a community with a very diverse set of interests and motivations for being there has been a surprisingly good place to develop my own self awareness. Plus, I am enjoying the game itself as a bonus, and it’s a deductible business expense because as an interactive developer, I have to stay on top of trends. On the other hand, 44 hours a week is a LOT OF TIME, so I will be reducing the amount of time I spend on it. The challenging part will be that I’ve made some friends now, and it’s fun to hang out with my fellow geeks and nerds, and learn from them while playing in this giant virtual world. Geeky, fun, and surprisingly educational.

But I digress. What I’ve learned from the productivity/consuming challenge is DANG. I SPEND A LOT OF TIME CONSUMING. I’ll be summarizing my findings in the next few days, along with my plans for behavior changes.