Picking up from Friday and Saturday, Sunday’s activity log for production/consumption ratio tracking shows a marked increase in pure goofing off. It’s Monday afternoon as I’m writing this, and I can’t even remember what I did yesterday. So let’s look at the graph (which took 7 minutes to do, from start to upload): 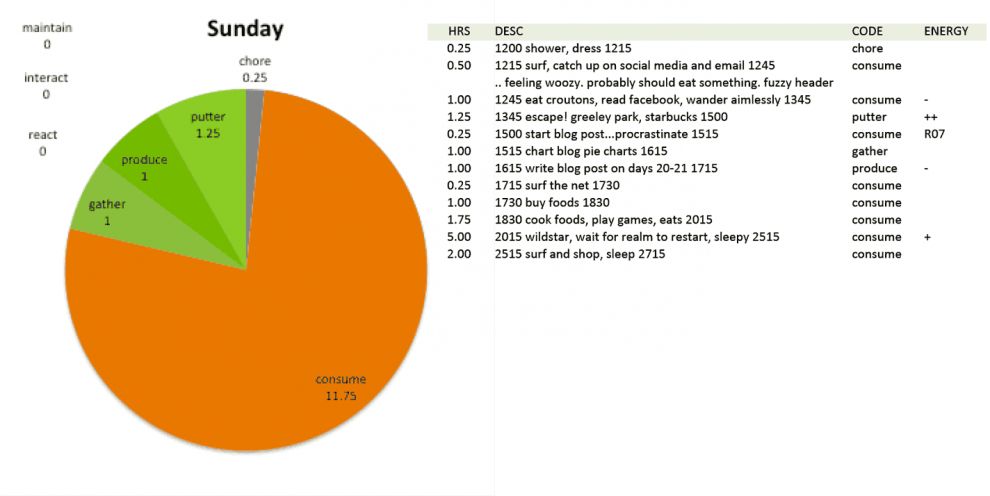 Ah, yesterday I woke up at noon, and was in a fog most of the morning. I decided to get out of the house and visit a nearby city park, where I bought a hot dog and spent some time wandering around people-watching. I can’t remember the last time I did this, but what struck me was the number of people there just hanging out and interacting with each other. Some kind of audition or theater practice was going on by the outdoor stage. There were families having picnics and playing various outdoor games. There were two Brazilian softball games going on side-by-side, cheerful yelling carrying lightly through the park to the elders parked in chairs beneath the trees. I saw that the city had provided rented garden space to residents, covering maybe an acre or two of land divided into many smaller plots, and walked the path around them to see what people were growing. Humanity was all around me. It was kind of a weird sensation, because it reminded me of the recent explorations I was doing in the online game WildStar, which is a “massively multiplayer online role playing game” that involved rather similar exploration. In both the real world and the virtual world, I felt somewhat detached from the rest of the world, because my “thread” didn’t seem to intertwine with those of other people.

I got a blog post out, yesterday’s two day review, and spent the rest of the day shopping for groceries, grilling, and playing WildStar. Or rather, I “inhabited” WildStar, which meant hanging out in one of the chat channels and seeing what was going on. I’ve been experimenting with being more outgoing on the channel, just talking and reacting as if I was actually part of it, and getting used to the idea of just butting into conversations or emitting whatever thoughts were on my mind. In the past I’ve found this very difficult to do, in real life as well as in online communities, but I’m testing the idea that maybe I don’t need permission to impose my interests on a conversational opportunity. Certainly, it doesn’t seem like other people have this issue. So in that sense, WildStar is serving a purpose. I’ve noticed that I’ve been a bit more outgoing with random people I meet during the day since starting this experiment.

Now that I can more clearly see how much time I spend “consuming/reacting” (the orange) versus making stuff that can be seen (the green stuff), I’m starting to see how lopsided it is. I spend a lot of time consuming stuff. To some extent I think this is natural for most people, but I’m curious to see how much I can alter the balance.

I also can tentatively say that I spend very little time doing chores and other maintenance; I just don’t think of it, and then the chores build up until they bring unhappiness onto me. Since having the house cleaned, I’ve noticed a slow degradation of the clean spaces starting to creep in; I’ll have to actively schedule cleaning sessions if I want to maintain everything the way it is. A novel (to me) thought is to schedule a weekly mopping of the kitchen and bathroom floors, as well as regular dusting. That might be the minimum requirement? Otherwise, dust and odor management only gets triggered by major social events, and I don’t even notice the slow degradation of my immediate environs until I realize it’s making me super grouchy.

The major observation, though, is the one I alluded to yesterday: the lack of deep dives into project work. For the past couple of weeks, I’ve been mostly in reactive mode, handling project-related tasks that don’t require a lot of deep thinking or architectural work. This is the kind of work that also requires me to deal with new situations, where I don’t know exactly what the “best” course of action is. To find out, I need to make a lot of mistakes and try to come to some clarity on it, but it is almost always uncomfortable and unrewarding because there is little to report. But this is the nature of creative work, and I have to remind myself that this is the way that advances are made, VERY SLOWLY, until such time that enough data and experience have been acquired so the process can be efficiently reduced to a series of templates applied in methodical steps. But to get there, I need to be methodical in plodding through the miles of endless dust, setting intermediate goals that allow me to assess my progress from the previous day. That means writing a lot of code that MIGHT NOT BE WORTHWHILE OR USEFUL IN THE NEAR TERM. It seems like such a waste of time, but it’s necessary.

You know, this process of me writing down my consumer/producer ratio is a good example of putting in the work to get some kind of unknown result. It’s an experiment, and I’m making up the tools as I go along. For some reason, I’m absolutely FINE with the process in this case. What’s the difference between this and the work I’m doing? Oh…duh. With the work I’m doing, I’ve made a promise to do the best work I can to deliver the best experience we can deliver, and it is bothering me that I don’t yet know what that is. Therefore, it feels like I am skirting failure every time I work on a new code module that has unknown specifications. I am assigning blame to myself for not being omniscient.

Fortunately, I am omniscient enough to know that feeling this way, having now identified it, is dumb :-) That’s the insight of the day.