ADVENTURES IN TAIWAN continue. This entry picks-up on April 27-28.

On Friday, we left our temporary lodging at Uncle’s house in Sha-Lu so my sister could get her teeth checked. Uncle is a highly-experienced dentist, and determined that she needed to have some work done immediately that afternoon. So we went to the Japanese restaurant across the street, which I’d visited many times before on previous visits and wasn’t too excited about. This time was a bit different, though: 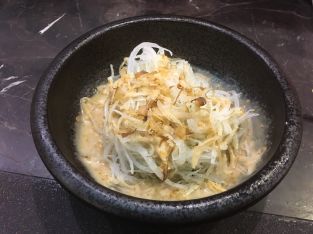 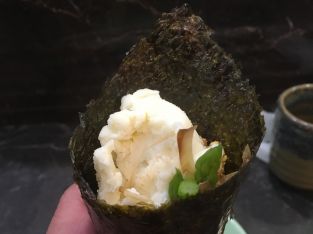 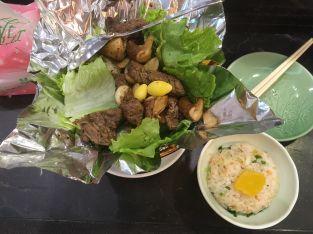 First, I had this amazing onion salad (above, left) that was very similar to the kind of Japanese appetizer salads we get here in the USA right down to the sweet ginger dressing, but the onion itself was a marvel. I wasn’t even sure it was onion at first because it was so mild and refreshing. Then came a handroll with potato salad and salmon in it, which is something I actually do like from this restaurant. My main entree was a beef salad which cooked slowly in a bed of lettuce in a foil bowl perched atop a small flame. The lettuce wilted into a kind of broth. It was interesting but not great. I’m not sure what kind of Japanese food this was, but it was actually OK because it’s a bit different every time we go there. My meal set actually included some other things like ice cream, some Japanese fried rice in a triangle shape, and coffee, but you’ll have to see the full Taiwan 2018 Flickr Gallery when that’s done. 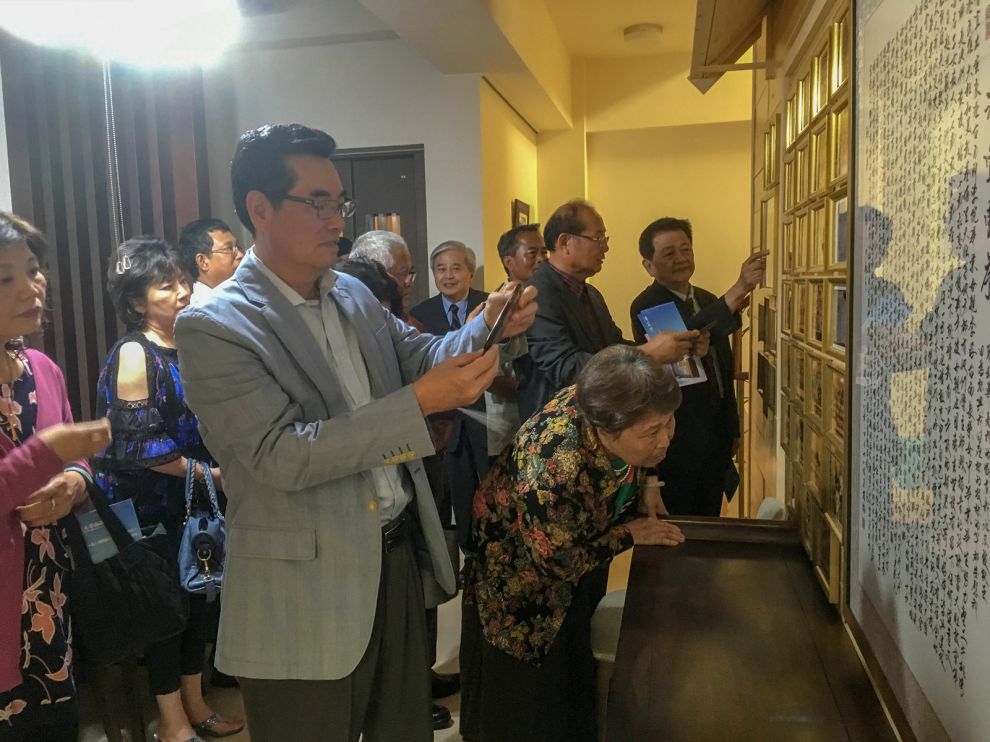 After lunch we spent some time with family while waiting for the dental procedure to finish, then it was back to Sha-Lu to rest up for the coming major family events on Saturday: the House Dedication ceremony and my dad’s 90th Birthday Celebration. A lot of relatives were in-town to participate at the service, which was a kind of family dedication to the memory of my dad’s father and his extended family. Uncle had built a memorial on the second floor of the Sha-Lu house (above).

Then, it was time for Dad’s birthday celebration dinner, which was on the 7th floor of a hotel called The Lin in one of the newer parts of Taichung. The venue itself was quite beautiful, as was the food. However, the hotel staff training was rather lackluster. My dad even commented on it afterwards, noting the lack of professional hospitality in directing people to the area. My impression of the hotel itself, from this and previous visits, is that it’s staffed like a mid-range department store with everyone assigned to a zone to do their ONE TASK OR ELSE SOMEONE WILL PAY DEARLY. I much prefer hotels that are staffed by people to feel they are empowered to make you feel welcome.

The event itself, though, was pretty great. Dad looked strong and happy, smiling and engaged with people. He was overall quite pleased.

But you all really want to know about the food, right? The menu (below, left) was provided with the appetizer course (not shown) in English as well as Chinese, so we could actually see what was coming! Our cousin June too could translate and give us color commentary on the food, along with our cousin’s husband Philip who is an international salesperson of some kind. 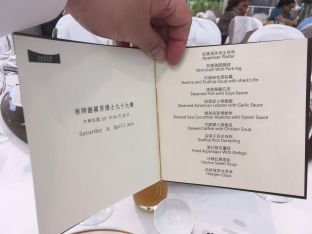 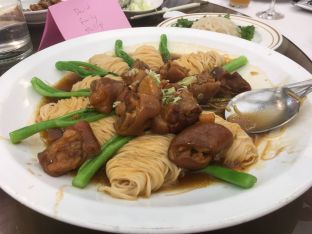 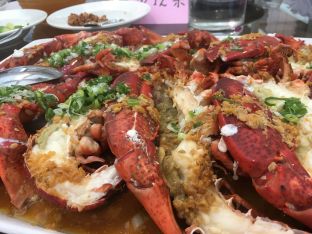 The appetizer course was wonderful, full of things I liked. The rest of the menu was largely seafood, which I don’t like very much at all. However, one of the first entrees was Pig Knuckles and Noodles, a dish that is traditionally served representing long life and prosperity. I’m not usually a big fan of pig knuckles because they are huge, but these ones were trimmed down to only the best parts and were quite good. A dish that I really wanted to eat but couldn’t was the “American Style Lobster”, served split-open and drizzled with some delicious-looking sauces and spices. I tried to eat a claw but the very smell of lobster makes my stomach turn, so I had to settle for taking a picture. 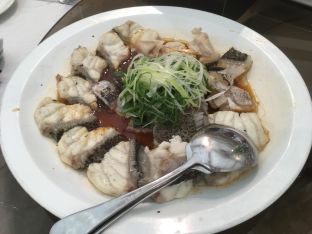 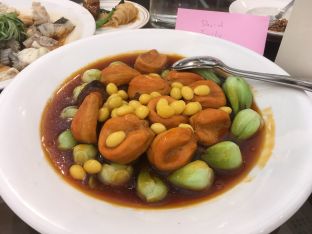 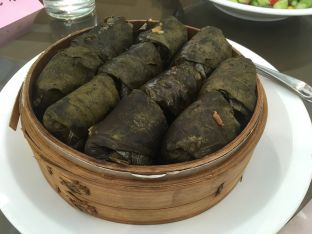 I didn’t include pictures of all the other dishes, but here are a few more. These Fish Fillets were yummy. These Abalone were said to be delicious but I didn’t dare eat them. I did try this glutinous rice wrapped in some kind of leaf (bamboo leaves?), which is similar to Jungdz (rice bundles) I had had in the past. There were some specialty deserts too as well as a lot of toasting. Overall, it was an excellent day!