Continuing my Taiwan 2018 Trip Blog Series for Wednesday May 2nd! Where we last left off, we had just spent the night at a nice hotel and finished a great breakfast. We hit a few more places on the way back to Taichung to rest. 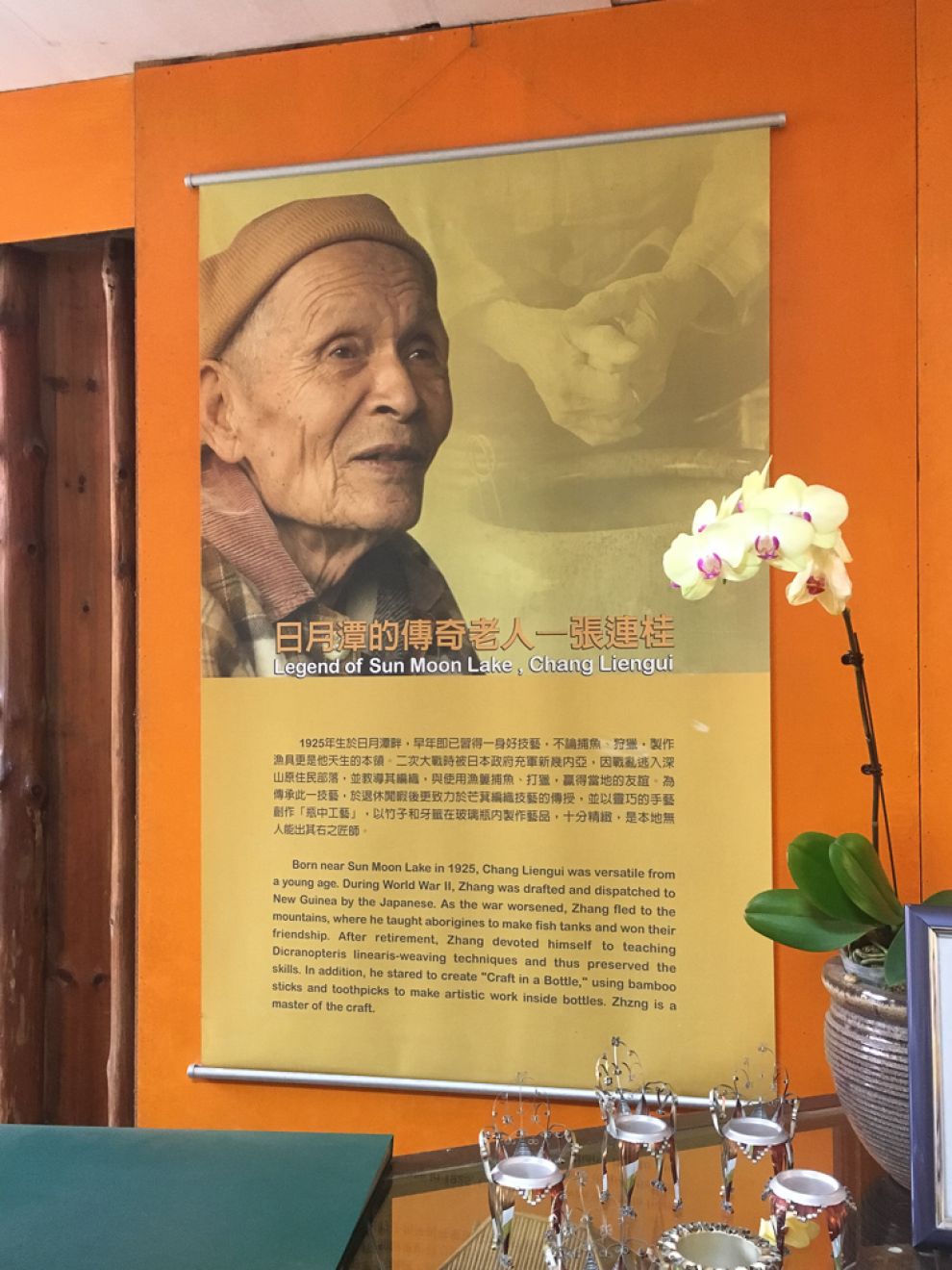 Upon picking us up from the hotel, our driver wanted to show us an tea house/museum that he had discovered on a previous trip. It was clearly not a place that saw a lot of visitors (below, left) and it took a while for someone to pop up. After having some tea, we were invited to see the museum devoted to Chang Liengui, a Taiwanese man who had been conscripted by the Japanese during WWII into Southeast Asia, escaped, and then made his way back to Taiwan. 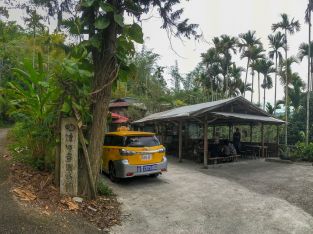 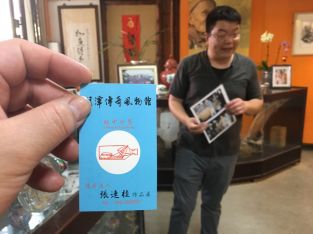 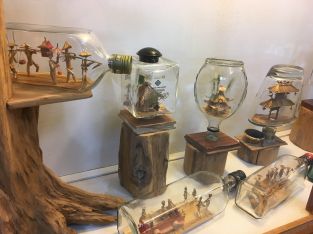 The museum was, from what I understand, a labor of love by Chang’s grandson (above, middle). There were posters, photos, videos. The elder Chang had been a highly resourceful and skilled craftsperson, and learned how to weave fish catching baskets after he had deserted the Japanese army. The inhabitants in the part of southeast Asia he had been stationed (I think it was Malaysia or Indonesia) had taken him in and taught him these skills, which he brought back to Taiwan some years later. He returned to the Sun Moon Lake area, where he had been born. He then taught the aborigines in the area how to weave the fish catching baskets and helped them prosper, also turning his skills toward assembling artwork in glass bottles using bits of wire, fiber, and glue (above right). 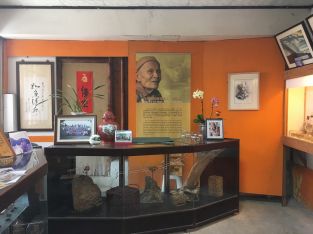 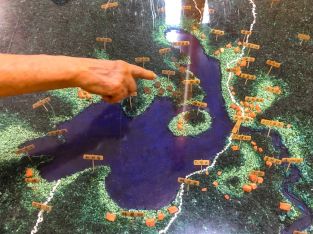 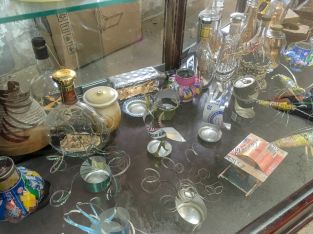 It is not a large museum, but it was certainly very interesting. My dad was enthralled by the story of Chang and pointed out all the skillful things he had done. There was an interesting map of the Sun Moon Lake area from before the Japanese artificially raised the level of the lake by building a hydropower dam (above, middle), as well as plentiful examples of Chang’s versatility. He had traveled abroad and met a lot of people too. Dad is only a couple of years younger than Chang was, and I think was delighted to have discovered a kindred spirit who had the kind of resourcefulness and artistic skill that he admired.

After the museum, we stopped by a place to eat that happened to have cable cars up the mountains. I didn’t really feel like riding in the cable cars, having gotten plenty of wonderful views of the lake. Besides, it was a bit overcast and I just felt like chilling out in the food court. I had an ice cream cone (not pictured) and bought my first souvenir of the trip (a small cute plastic owl), and just observed the lake and the goings-on around me (below, middle). 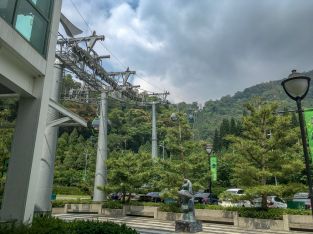 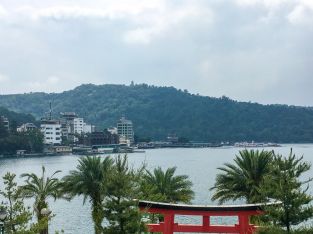 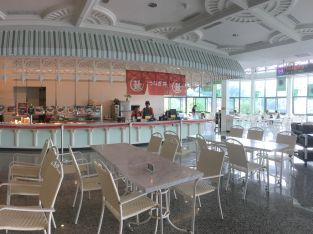 After everyone had eaten and was rested up, we stopped by the side of a lake to take some pictures by some kind of famous rock. I noted some of the cool bikes they had (below, left); these were rentals I think that a couple were using. Sun Moon Lake has a lot of bike trails, and if you like that kind of thing you’d probably enjoy circumnavigating the lake. It seems very popular, as biking in general has become in Taiwan as a whole. 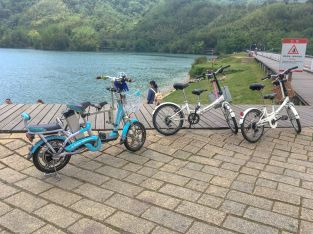 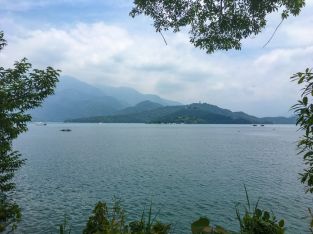 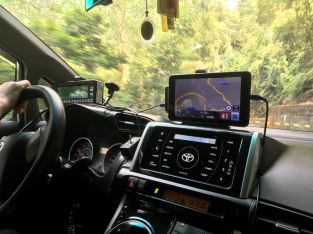 Time to go home! I got to sit in the front seat and observe all the taxi gear (above,right). It seems that taxis here tend to have at least two GPS systems (one is a backup or uses a different routing algorithm?) Anyway, when we got home we were checked into a hotel near the Taichung Park, which was quite a bustling area (below). 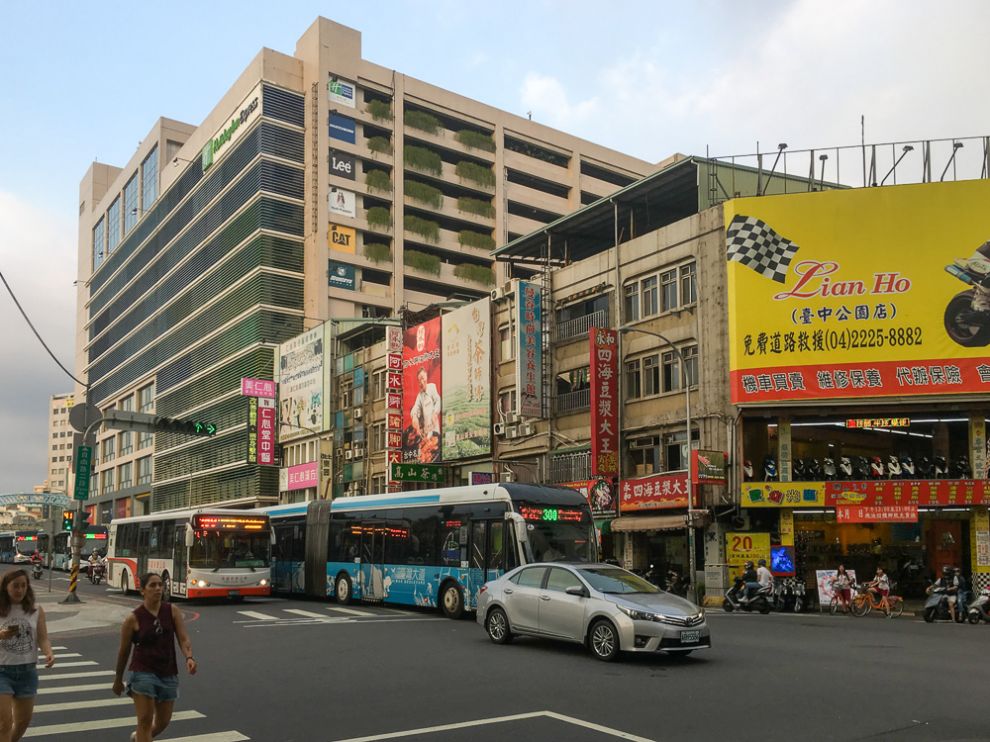 We were to stay a single night before heading to our east Taiwan trip for three days. This was something we had never done as a family before, purely being tourists, so I was quite looking forward to it.