After touring around Sun Moon Lake on boats, we finally checked-in to the hotel, the The Lalu which is built into the side of a mountain overlooking the lake. It’s one of the premium locations on the lake; my dad said something about how this area was once exclusively used by Generalissimo Chiang Kai Shek and no one else was allowed to build there. In recent years, the names of various places in Taiwan have been renamed. For example, there’s an island in the middle of the lake called Lalu Island, but during the time of Chiang and his party’s rule it was called Guang Hua Island, and before that during Japanese rule it was called Jade island.

This is easily one of the nicest hotels I’ve ever stayed in. Since this was a once-in-a-lifetime splurge celebrating Dad’s 90th birthday, he’d gone for the best place in the area, and I can believe it. Here’s what my room looked like: 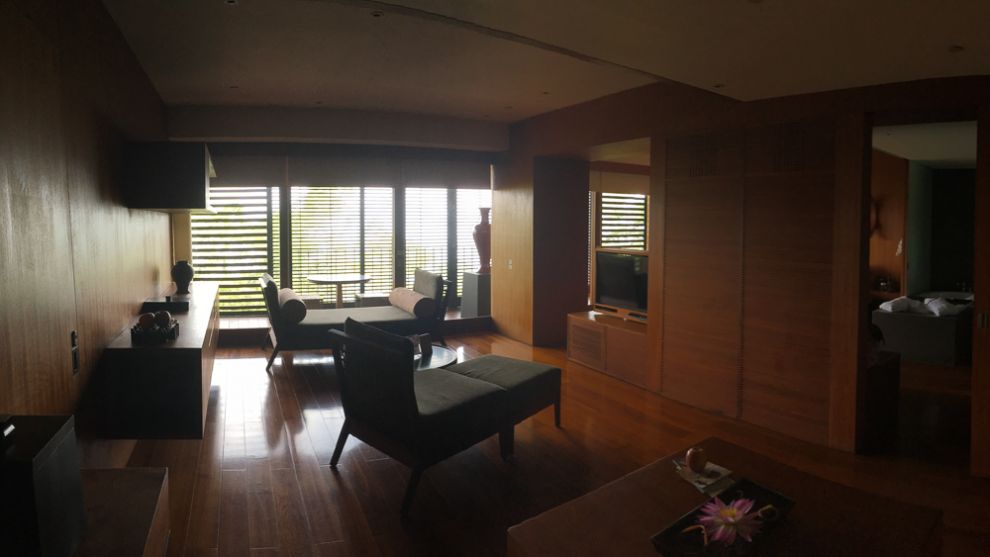 The hotel grounds are immaculate and elegantly architected. The impression of my room was that it was all dark warm wood with beautiful furniture and decor. 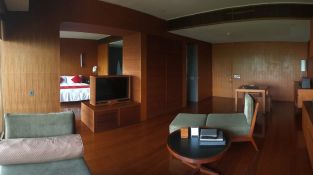 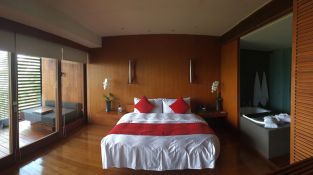 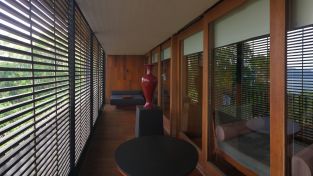 After a few minutes in this room, I silently made a vow to make more money so I could afford to stay at places like this more regularly…I don’t want to stay at Motel 6 anymore! :-) The view from the veranda toward the lake was obscured by trees, but was still beautiful.

Looking down from the view, you can see the pool area on the bottom floor (below left).

Even the exterior hallway was lovely (below middle), as they were exposed to the outside but protected by the sheer mountain wall that created a kind of 8-story high atrium. I took a picture of it after dinner, so unfortunately it’s kind of dark (below right). 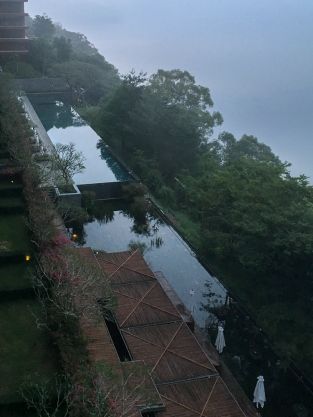 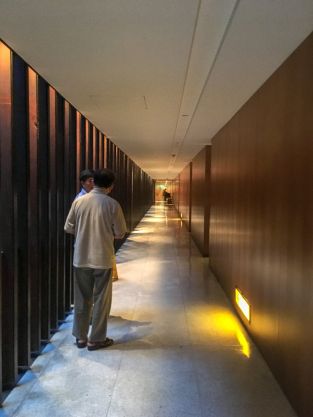 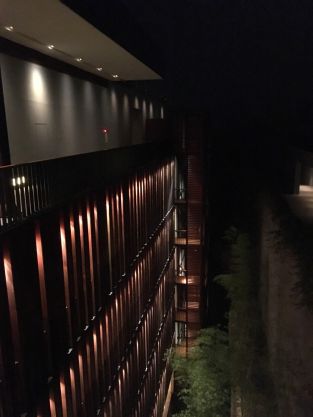 We also went exploring a bit to see what else the hotel offered. There was a very nice reading library too (below right), with a lot of books in multiple languages. Lots of history, art, and design books. I even spied a copy of Cathy Erway’s The Food of Taiwan nestled in the cooking section; I wonder if she placed it there herself?

We were staying only for one night, but we had two meals scheduled at the restaurant. The first meal was a Western-style set course that was pretty decent. They had baked bread on the premises that was outstanding, and the meals themselves were interesting well-prepared but didn’t make me cry aloud with wonder. Unfortunately it was very dark so I couldn’t really see the food too closely. I can’t even remember what I ordered…some kind of pork or beef with a demiglace on it? (bottom, left). 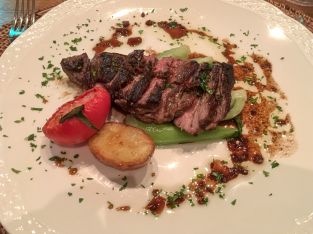 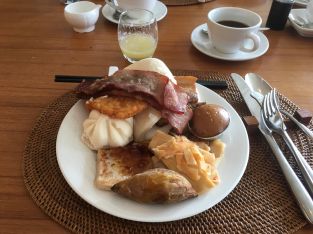 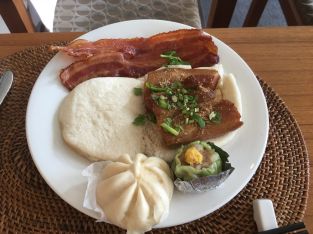 Breakfast I found far more interesting. It was a well-appointed buffet with a variety of Western and Asian food. It was easily one of the best buffets I’ve had in a long time. Some of things you can see on my first plate (above, middle) are braised pork belly in a bun, a pork bun, a steamed yam, a daikon cake (lobogao), some bamboo shoots, some kind of steamed sweet bun, and thick slabs of local bacon with hash browns. I got some seconds :-)

Before having breakfast, though, I wanted to watch the sun rise over Sun Moon Lake (above). I’d checked the time for sunrise before going to sleep, so I was up on the observation deck around 630AM, and stayed to maybe around 800AM. It took a little longer to see the sun itself, as the lake is actually surrounded by mountains so you don’t really see the sun for a good 45 minutes. I slowly watched the night turn to dawn, then to daylight. The mist obscured a lot of detail on the lake, but it slowly burned off. This was time well spent, I thought. I even shot video of the sun rising with a camcorder I brought with me, but I don’t think the footage came out good. When it comes time to put the trip video together, I’ll review it then. 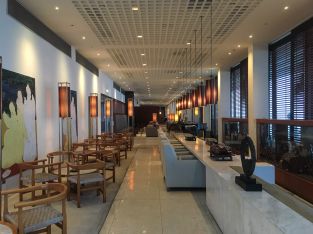 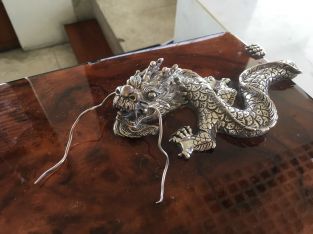 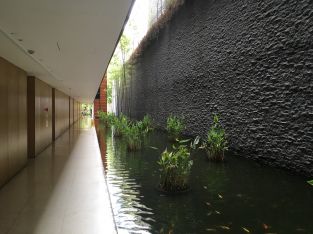 The deck is connected the main lobby by a kind of cafe area (above, left) . Like other areas of the hotel, there were various interesting doo-dads scattered around, like a cool wooden box with two dragons protecting it. I took a picture of one of them (above, middle).

I headed downstairs to have a look at the lowest floor where the pool is, and saw there was ANOTHER interior reflecting pool. The hotel layout it interesting since it’s built into the side of a hill but doesn’t touch it. The lobby is the top floor, and the floors are numbered going DOWN.

The pool itself was a nice design. I liked how water would recirculate by trickling over the edge to create a fountain-like curtain effect.

Near the pool area are outdoor Japanese-style (?) rooms, presumably for guests to use and talk (below, left), which were built over a koi pond filled with fat golden carp. 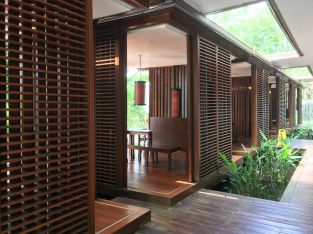 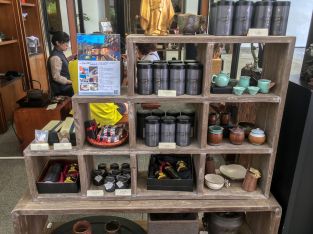 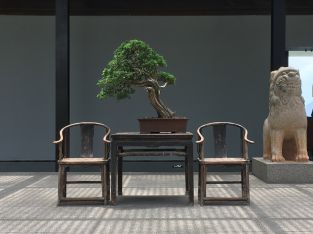 Before leaving, I walked around the other parts of the hotel. There is a very well-appointed gift shop that has all kinds of artisan goods made in Taiwan. I am kicking myself for not buying some things I saw there, such as this bright blue coin purse. I thought I might see it again at another department store, but no luck. Next to the gift shop was a small tea room (above, right), which you have to arrange to use before hand (a complimentary tea sampling was included in our room).

We checked out around noon, and I took a parting photo of this Asian-style chair and table setup that is in front of the entrance to the hotel. I’m not sure it’s exactly Chinese. If anything it reminds me of the sort of furniture you’d see in an old Chinese-style house that is not too pretentious. They are solid chairs too!

Overall, a great hotel experience. Definitely the best one on the trip!