After resting from a long weekend of family-related matters, we took a car to Sun Moon Lake, one of Taiwan’s most famous and scenic resort areas up in the mountains. I had never been there as an adult, and this was the first time our family had gone on any kind of sight-seeing trip together that didn’t involve some Presbyterian Church-related business (that I can remember, anyway). 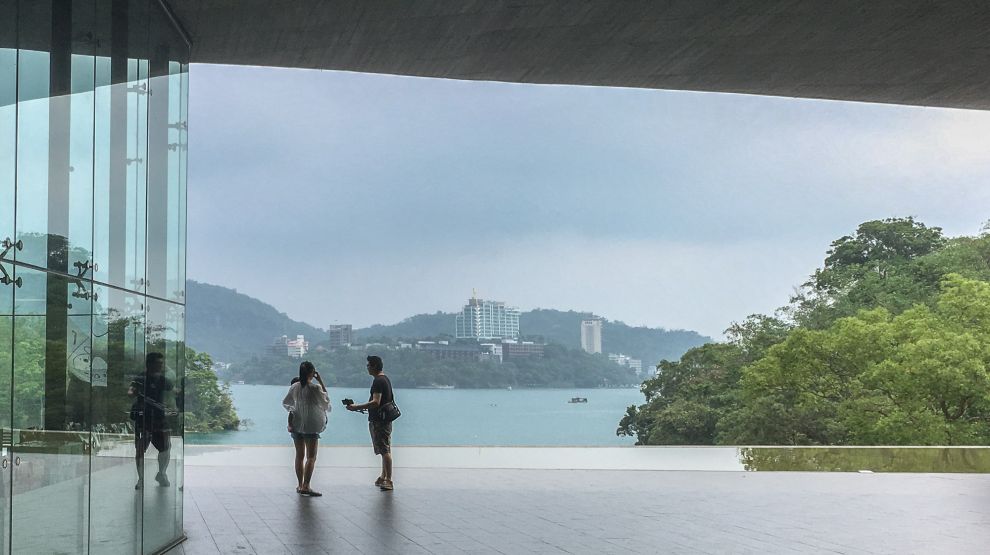 After about an hour’s drive from Taichung, we arrived at this first Visitor Center overlooking the lake. It was a rather striking piece of architecture, with gift shops and a small cafe where we decided to get lunch. I took a picture of the map for later reference. 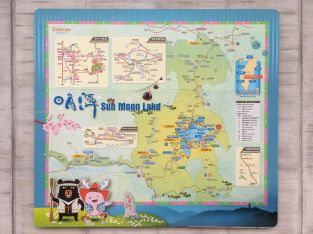 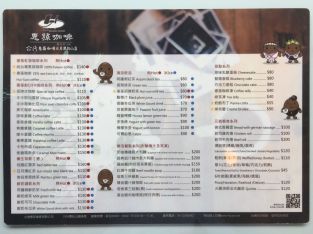 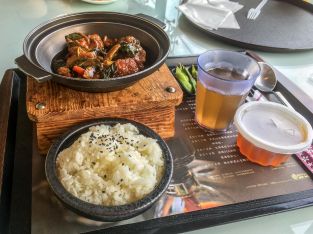 I decided to have the Three Cup Chicken, which is one of those “Taiwanese” dishes that I had actually never had since my mom had never made it before; she grew up in a more Taiwanese-Japanese cooking tradition, whereas a lot of foods that Taiwan is known for now are actually more Chinese in origin or were invented later. Ordering this dish at a visitor center cafe didn’t seem like the best idea, but I was pleasantly surprised…it was actually quite well prepared with care. SCORE!

Also notable was the coffee. Taiwan’s coffee culture has been rapidly expanding in the past few years, and the “Hui-Sun” coffee is apparently grown right in these mountains surrounding the lake. I was curious what Taiwan-grown beans would be like. Both my sister and I liked it. I’m not enough of a coffee snob to know how well they rank against the best, though, but it pleased me to know Taiwan was taking on the challenge! GO TAIWAN! 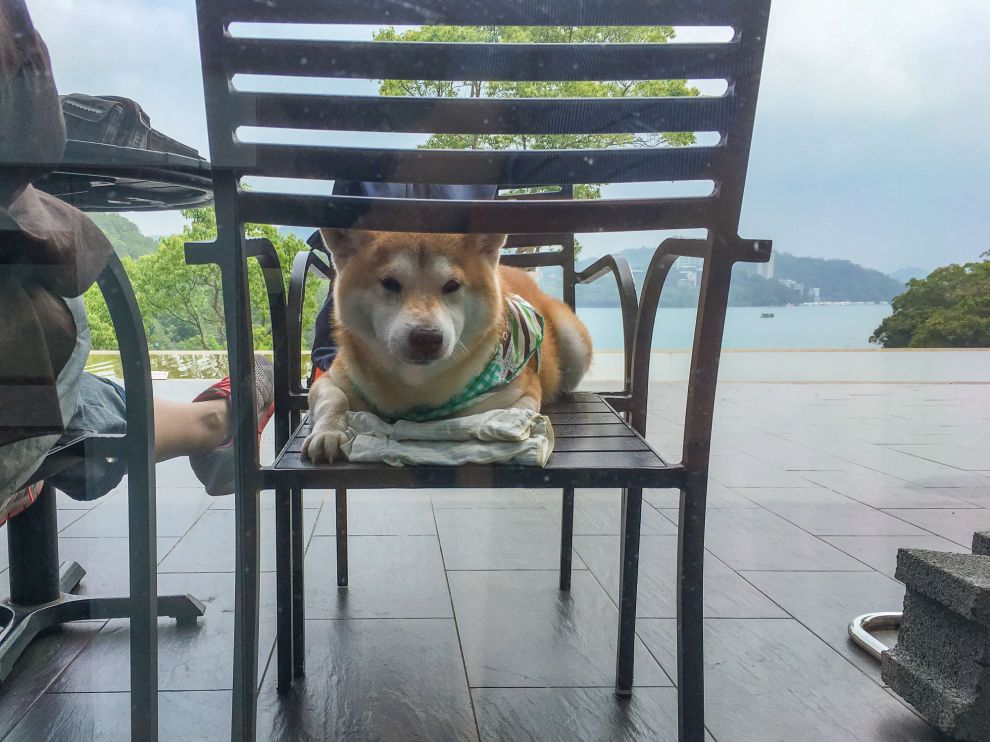 I noticed while I was eating, this dog was silently judging me. We later saw this dog several times during the day on the boat ferry and around the town. It’s possible that this is a common breed of dog in Taiwan, though. It looks a bit like a Shiba Inu, a dog breed from Japan. I wouldn’t be surprised if there were a lot of them in Taiwan due to Japanese colonial occupation in the early 1900s. 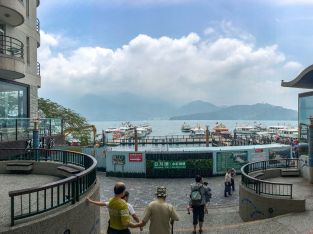 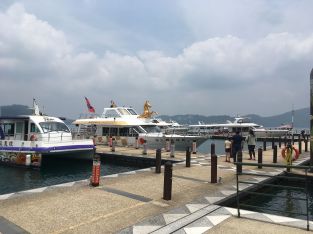 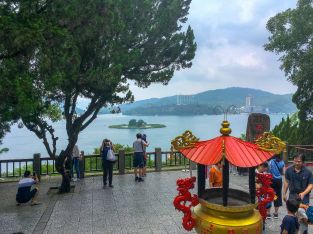 After eating we went to the Shuishe pier, where we could get a boat ferry to two other piers. The first stop was Xuanguang Temple pier. You can walk up a flight of stone stairs to see see the temple. There were some aboriginal people (the Thao) doing some kind of musical presentation; I’ll post these pictures in my Flickr Album when I get a chance. In the view you can see Lalu Island still poking up out of the lake. 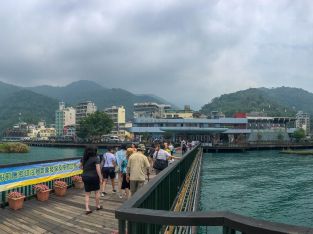 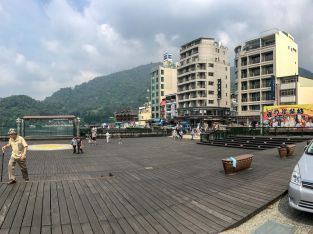 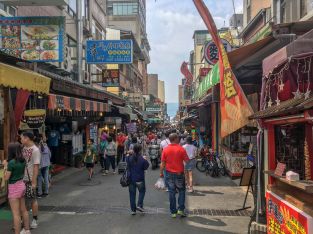 Still killing time, around noon we got on the ferry again and hit the third pier, Ita Thao Village. It’s a small town with a large visitor center. We walked around a bit, taking in the sights while looking for a place to eat. 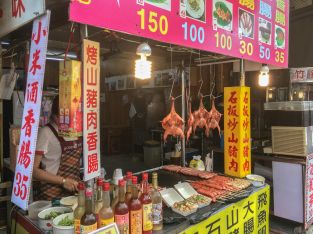 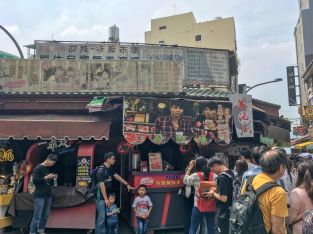 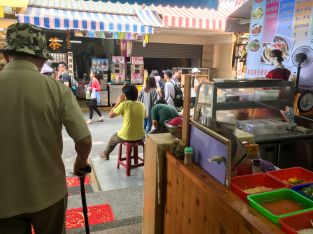 An interesting phenomenon I noticed in Taiwan was the use of celebrity endorsement for various street food places. I’m not sure what this place was selling (above, middle) but apparently it’s known for something. I’m assuming they are some kind of snack; Taiwan has an enormous and constantly-evolving snack culture, and the entire island is a grazer’s paradise. 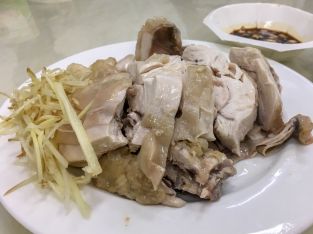 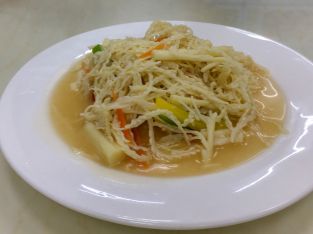 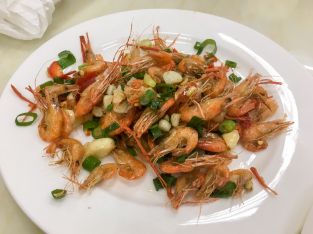 We finally settled on a place that looked relatively affordable and more importantly was air conditioned. A-bun ordered a few dishes; the ones that stood out were this poached chicken (I just like this kind of chicken dish), betel nut stems (above, middle), and this plate of fried shrimp (which I didn’t eat). Shrimp of various sizes is available EVERYWHERE in Taiwan. Shrimp makes me feel ill, though, so this is not something particularly alluring to me :D 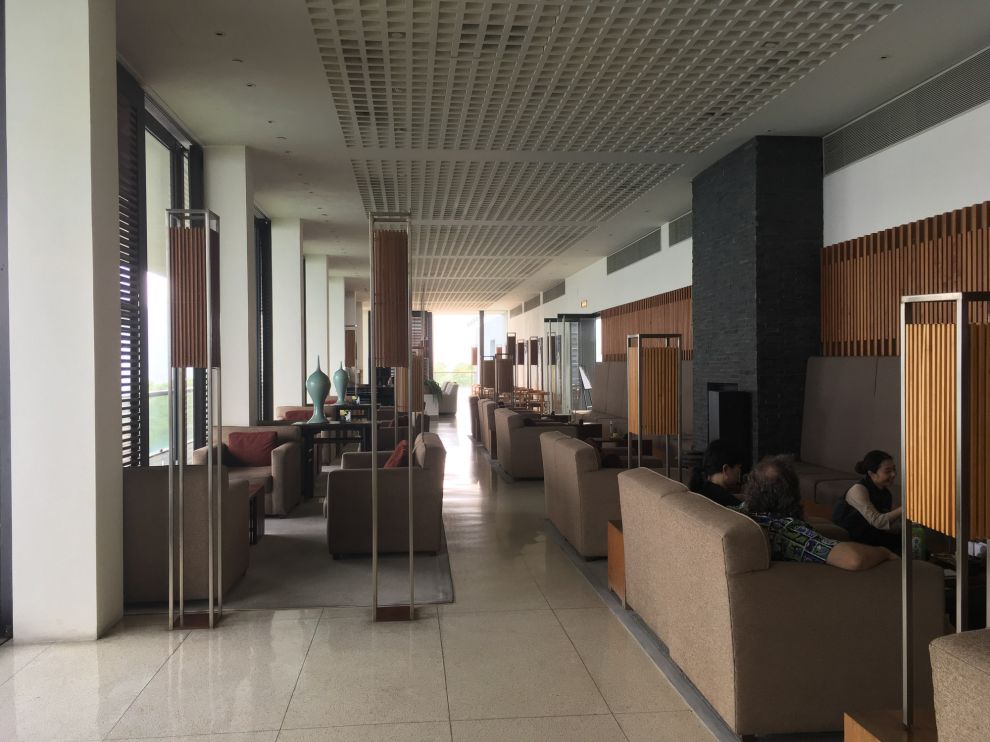 At 3PM it was finally time to check-in to the hotel for one night. We stayed at the nicest hotel in the area, the Lalu Hotel which was really quite noteworthy for many reasons. I’ll talk about it in the next update on Monday!