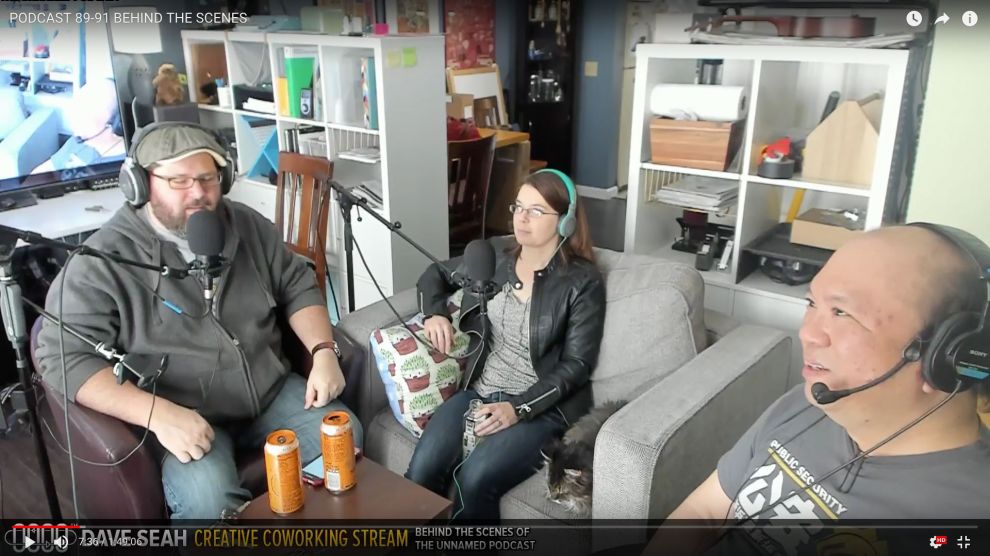 Today was an extremely busy day, both positively and negatively.

The great part was recording our regular podcast with friends Sid and Sara Ceaser. Usually it’s just me and Sid, but Sara had the day off so we got to do a three-mic setup. I haven’t tried this before with my current audio-visual setup, but it seemed to work pretty well. Afterwards we went to have lunch at a local Mexican-style restaurant and had a good time hanging out in stylish post-celebratory fashion! The negative part was later in the day when I experienced a sudden loss of confidence in myself, quite unexpectedly. I didn’t even know what was happening, just that I was feeling anxious and sad and I didn’t know why. I “medicated” myself with the chocolate from the chocolate drone, which had been unwrapped for our podcast to show people what was inside, and this predictably made me sick and I slept for eight hours. However, when I woke up I had a pretty good idea of what had happened. More about that (and pictures of random stuff) after the jump.

It was great to have Sara on the podcast today because it changed our mix of topics a bit. We were mindful of trying include her in our discussion of pop culture and art, and I think the three episodes we recorded back-to-back went smoothly. These will be online starting next week, covering topics such as Burt Reynolds movies, Flea Markets, Roadtrips, and Side Hustles.

I’ve been also thinking of starting my own solo podcast so I can get deeper into other topics of interest to me, such as entrepreneur stuff and productivity. I don’t think these topics fit as well on the regular podcast, which is more about creative inspirations and pop culture influences in the pursuit of our work. I ran the name I was thinking of by Sid and Sara at lunch, and they seemed to think it would work. I think I want to do this, and it is part of my focusing of on a specific mission that has come about from my recent epiphanies regarding my Groundhog Day Resolutions.

A RAPID LOSS OF CONFIDENCE

The focus on mission was actually at the root of my sudden loss of confidence today. I have been feeling pretty good about several things in my life, and with the recent insights about the nature of my work it is starting to feel like I have the strength and resources to carry on. And yet today, Aa few minor interactions with people set off a wave of anxiety and doubt that left me feeling gutted. It happened quickly enough that I felt like I was bleeding-out, but I didn’t know from what or where. I had several bad dreams in a row, but the only one I can remember right now is one about an alligator attacking me and I had to hit it on the head a lot until, bloody and bruised, it accepted me sort of as its master. And then, it was attacked by a much larger alligator which instantly killed it, and then started chasing ME. I remember a fragment of another dream where I was lost in a marketplace and had to seek permission from someone to leave with a bag of stuff I had brought from outside the area but looked like I might be shoplifting, and it turned into a visit of a really depressing house of a young immigrant family trying to rise up through the ranks. “These kitchen appliances were really terrible” I remember thinking…

But I digress. I had several interactions in a row that shook some foundational beliefs that are keeping me grounded.

These are personal truths that took me a long time to accept as “strengths, not weaknesses”, and this helps me accept myself as being “different but still ok” from other people who seem to not have the concerns that I have. It’s much easier, though, to practice these beliefs in isolation. When it comes to SHARING these truths with other people—you know, actually being in the real world and not just by myself doing my own thing—it becomes quickly apparent that I AM weird and inaccessible, and come across as pretentious and “not one of us”. I can recognize the look: a kind of deadness in the eyes as we talk, a random change of subject matter away from the conversational points I’m having, a lack of enthusiasm/specificity in the responses. When I see that happening I change the subject, recognizing that perhaps I’ve talked too much about it and it’s not a subject of interest. Today, however, was the first time that I saw it happen with TWO of my most foundational beliefs and I wasn’t prepared for how much this would shake me.

I’m better now, having thought through it, and will be better prepared should I choose to make myself this vulnerable again. But there are two depressing thoughts that strike me as true:

I’m trying not to feel sorry for myself, or despise people as a revenge response, because I don’t think these are positive stances to have. After having processed the emotional aspect, my optimistic INFP self says, “well, it is still worth pursuing your goals of building a neat community so YES all the animals can be friends and share stuff they like, and they will be safe and happy and have good jobs and do projects together HOORAY!” And the INTJ side of me is saying, “Well, people can be self-centered and have their own troubles to deal with; I wouldn’t expect them to have the energy to deal with OUR issues on top of that. So we will accept this as the reality of the situation, and work to make a nice place for all the animals to be friends, because this is FAR PREFERABLE than a battle royale to the death. Isolation is a necessary mission cost.” And then my INFP voice says, “Yup, people suck but they don’t mean to! Just because they don’t say anything doesn’t mean they hate you!”, with the INTJ voice adding, “Indeed. People have good intentions but don’t always act on them because they are under constant stress from their own anxieties. We have tried to break free of this and not cross the line of appearing like a smug asshole about it, but sometimes negative reactions are inevitable.”

This makes sense to me, but I still am not sure how I feel about it. I think it’s possible to build a community with shared values I have expressed. It is not designed to be appealing to everyone, and I’ve always known this. As the designer of the community, it is up to me to establish its cultural values and embody them (at least, that is how I see them). It is up to people to decide if it’s something they like enough to be a part of, and I am fine with that. But these are all abstract notions; it had never occurred to me until today that maybe the specific people I thought would be part of this really don’t want to be, and that I am still too weird and inaccessible to accept as a whole. This is not a productive thought to dwell upon, but I think being prepared for rejection and disappointment might be wise, if it does not prevent me from expressing the truth of my whole self. The whole point is to have a place where expressing the truth of one’s self is safe, acknowledged, and actively supported rather than merely tolerated. 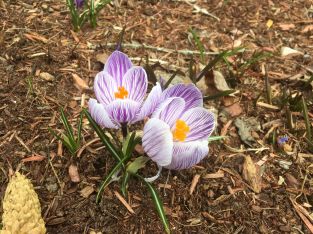 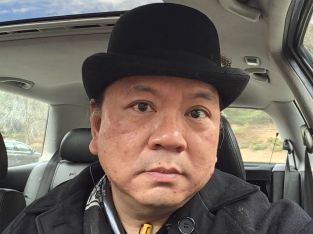 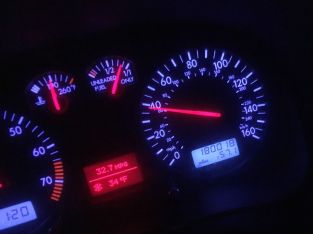 In other news, I was happy to see that it’s finally warming up enough that the spring crocuses are bursting out of the ground. At least I think that is a crocus. It’s pretty!

I have continued to wear my bowler hat around town. I am still self-conscious about it, but it is getting easier and I am starting to warm to the idea of having a more visual uniqueness. I even added a SCARF as a layer underneath my jacket, along with a pair of neck headphones and my fountain pen with matching nail polish. I’m deliberately pursuing a kind of style despite my discomfort with it. Once I establish this style, I want to then establish ANOTHER one, though I’m not sure what that will be.

I hit the 180,000 mile mark on my Volkswagen GTI VR6. I got it new in 2000, which means that I’ve averaged about 10,000 miles for every year I’ve owned it. I’m probably putting less than 3000 miles/year on the car more recently, so I probably have another 7 years on this car before the engine really starts to go. I’ve taken good care of it so I don’t see why this isn’t possible, though perhaps parts will be difficult to find. I’m thinking of putting more money into the car to take care of some body rust so it’s “like new” again. I still think it’s a beautiful car and I can’t think of what I would replace it with.

That’s it for today! Sorry it was kind of a downer, but that was how it went :-) Here’s the accompanying What’s Up Dave Livestream Archive for April 12