Happy Monday, everyone! Got a couple interesting stories to relate today. The first is a inquiry about outlining scientific journals from Fast Book Outliner fan Benjamin, and the second is some light observations of the evolving virtual coworking community. More after the jump!

Benjamin asked (via the David Seah (dot com) Facebook page) about adapting the FBO for the purpose of distilling scientific journals into accurate summaries. He writes (emphasis mine):

BENJAMIN
Have you (or a fan of your work) created something similar to The Fast Book Outliner … for Academic Journals? I want to create a template for summarizing/annotating papers I’m reading, and I always like to check your site for ideas–you have superb design sense–keep up the good work!

DAVE
Hm, I don’t have anything specifically for Academic Journals. Can you point me to an example online and describe the kinds of note taking that you do with such things?
What are you researching? I’m just interested in what people are interested in

BENJAMIN
I’m working on a Ph.D. in human anatomy. I’ve spent the past couple of years doing microdissection of the cardiac plexus, mainly focusing on the sympathetic innervation to the heart. Now I’m using cone-beam computed tomography (CBCT) to study the nasopalatine canal, a tiny bony space that connects the nasal cavity with the oral cavity. It’s not a super-sexy project, but it’s important to maxillofacial surgeons or anyone dealing with trauma to the front of the face/dental implants etc…

For data collection, I’ve experimented with FileMakerPro. Here’s a screen-shot of what I have so far: 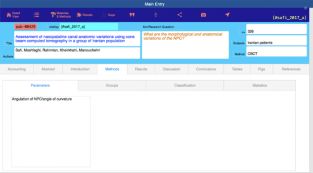 BENJAMIN continued
I’ve recently been messing with AppleScript, Python, R; learning Adobe Illustrator, InDesign etc…, but for YEARS I carried around a Franklin/FranklinCovey planner, and eventually developed my own single-sheet weekly planner (the Japanese (my undergraduate degree) is nice because it keeps the text compact), but I haven’t used it in a while. I’ve been SO unproductive the past few years-I need to get back to basics.

The FileMakerPro is great because it puts is right into my database; however, I don’t remember anything I input. And I tend to spend too much time on details that may or may not be important. Ideally I’d like to design a form (5 x 7) that summarizes every paper I read. It would have the basic sections: Introduction, Materials & Methods, Results, Discussion; as well as areas for other notes e.g., areas of controversy, themes, questions etc…

I just thought of a paper that I’m really excited about. The authors developed an app that puts an academic paper on a timeline of central ideas and displays it like a screenplay. I don’t think they’ve abandoned it, but it’s not useable as-is. I found the files on github [see TextGistGraph], but I don’t know enough to make it work. From a design perspective, it’s pretty cool stuff. [link to paper LitStoryTeller: An Interactive System for Visual Exploration of Scientific Papers Leveraging Named entities and Comparative Sentences

This is an interesting design problem, so I thought I’d share it with the audience out there and see if anyone has any thoughts to share on this challenge! I’m also going to post this on Patreon and consider it a community project…yeah! If we can get some synergy going maybe we can start making some new tools!

THE EVOLUTION OF THE COWORKING COMMUNITY

It’s been a busy week in the virtual coworking community on my Discord server! We’ve had a few more people join, and the level of conversation is rising to the point that I’m wondering if we’ve crossed a threshold of being too interesting to be a good productivity discord chat server. This forced me to revisit and rethink the nature of the chat room itself. Let me get a bit into the history of the chat room and the theory behind my community-building efforts:

I started the server August 2016 (here’s the original announcement). As I say in the post, the purpose was to create some connection with people while providing a “work vibe”. Also, I thought of maintaining the discord presence as “office hours” for me; if someone wanted to come and talk with me and hang out, I was open to it! I’m on the computer all day anyway. A third benefit was that I could make special “member ranks” for people who were supporting me on Patreon, which seemed like a fun perk.

Here’s what the early chat room looked like back in 2016: 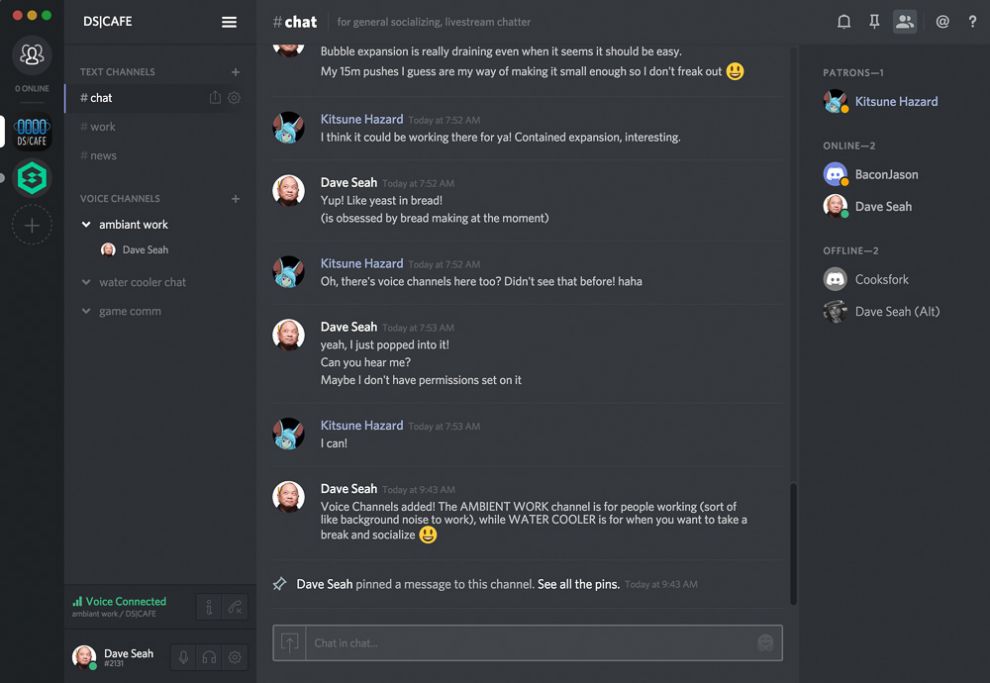 The chat room has since grown into a place where we have regulars who drop by for company as they work. Some people hang out during the day and chat in the “Noisy Work” audio room as they d their work. It’s expanded from just three rooms to the current structure of social chat, support, coworking noise rooms and deeper discussion, evolving to fit the needs of the members. Here’s what the room looks like now: 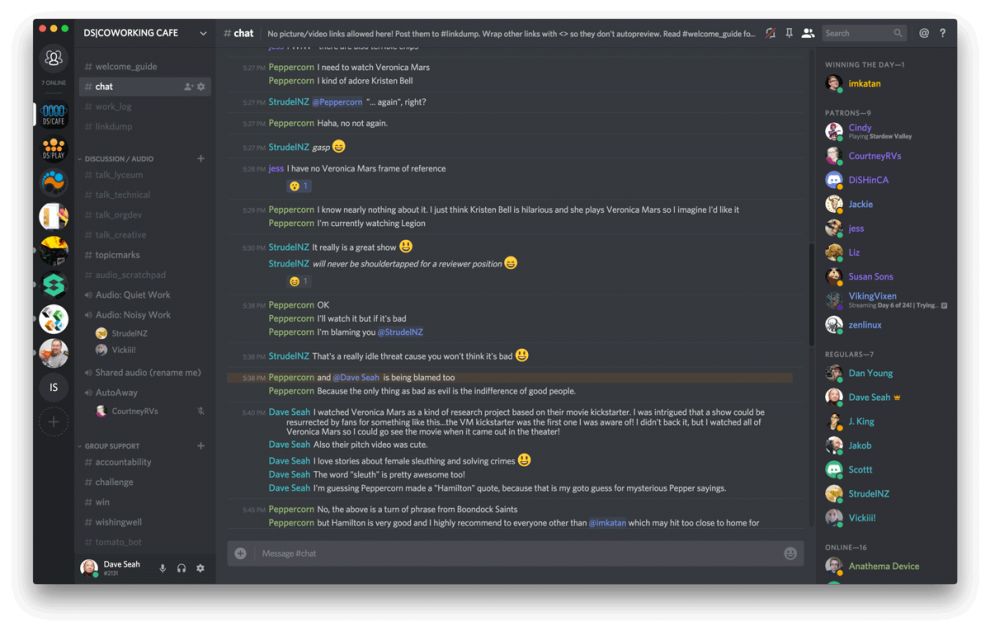 I am currently concerned that the chat room has become too interesting, generating too much conversation to easily manage, which makes it less valuable as the work-focused environment it purports to be.

The current organization of the chatroom is to allow users to “choose their own level of distraction”; if you want focus, choose the #work_log channel and just see terse statements about what people are getting done. If you want to chat about other things, then that’s what #chat is for. If you really want to get in-depth about something, jump into our #talk_lyceum and have a seminar-style discussion. We’ve also added specific talk rooms for technical matters, organizational development, and creative works. We also have some support rooms where people can be encouraging or express their joys at doing something kick-ass. This has worked pretty well, I feel as a work first environment, with the necessary supporting side conversations that convey that this is a place with interesting people doing interesting work, creating the social energy that encourages us to push forward on our OWN projects.

Right now, I encourage people who join the Discord to mute all the channels so they are not constantly bombarded by notifications about new messages, and then pick the level of distraction you want. When message volume was light, it wasn’t bad. Now we are experiencing higher message volumes, not all of a working nature, so I’m going to try declaring a work group and a social group in my channel organization. @jakob came up with a nice starting schema that I’m going to use. Also, I’ll be moving some channels around and renaming them so the names of the chat rooms reinforce what section you are in. I think that will help with new member onboarding, as it will be more clear where people are typing about what. I am deliberately avoiding cutesy name rooms because this just makes it hard to know what the intent of the chat server is unless you are “in” the clique that knows everything. My overall goal is to make the chat server as clear in intention as possible.

Additionally, I want to ensure the tone of the group is always accessible to newcomers. Culturally I believe that this requires a few actions on my part:

Really, the above is just about me being an example of the kind of culture I want to foster, and I think the principles I’ve outlined above are the means by which I can achieve it.

I’ll be making the chat room changes tonight or tomorrow. If it ends up being a terrible mistake, I’ll just undo it :-)

I’m starting to freak out a bit about preparing for the upcoming TAIWAN TRIP. I’m realizing that I might need extra video-shooting capabilities because this will be a pretty important family event, and I want to capture the footage. I also need to be more mobile on this trip, so upgrading my luggage with spinner wheels will help traverse the various subway and trains we’ll have to take to Taichung. There’s also a lot household and work stuff to get out of the way. Ooof. And purchasing of decent clothes. YEEP. 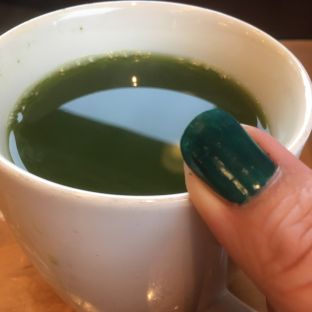 On a less stressful note, I tried @Peppercorn’s custom Starbucks tea recipe: 6 scoops matcha powder in hot water, no classic syrup. This is a relatively low sugar drink, though the Starbucks matcha (green tea powder) has SUGAR mixed into it. I’ve never liked Starbuck’s green tea, but the six-scoop quantity does make it taste less like something almost but entirely unlike tea…

I also am trying out a nail polish from OPI I saw at TJ Maxx, marked down to $2.99. I only have put on a single coat and am letting dry for 24 hours before putting the next coat on; my friend Joy at the Asian market says she does this and it helps with the smoothness of the final surface (?). I was thinking it would be nice to find a color that matches the matcha. There’s a bit of yellow in this green that would work well with my skin tone.

That’s it for today! Lemme know what you think about Benjamin’s Scientific Journal Outliner tool quest!