Daily 015: The Search for Self (and “Doritos Crunch Nuts”) 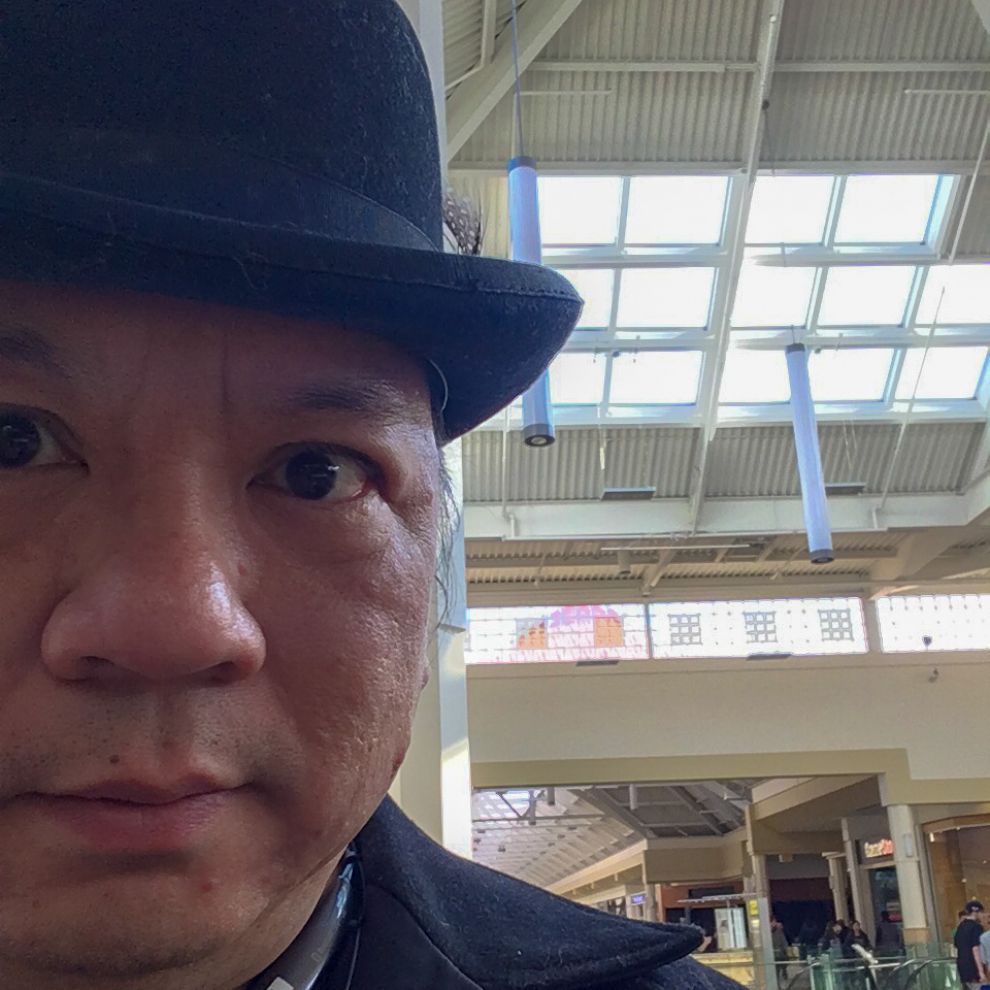 Happy Monday! This is my twice-a-week report on what I’ve been up to. I’m continuing to do this to test whether this kind of content is (1) interesting to anyone and (2) something worth doing. This one took a long time to write because a lot of stuff happened. The past several days have been quite social, involving direct contact via phone or in-person with a variety of people. I’ve also been doing travel arrangements for my upcoming family trip to Taiwan (eep) and re-establishing contact with dear friends I have not seen in far too long. Productivity-wise, it’s been pretty great! Let’s get into it! 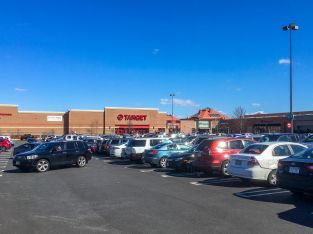 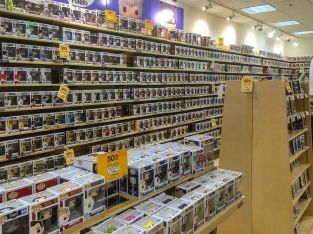 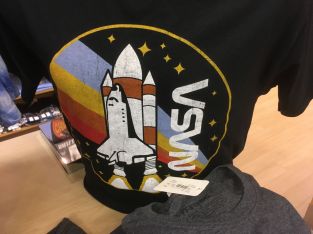 On Saturday I took a trip to Target to look for a few items: the elusive Doritos Crunch Nuts, something called “eyebrow gel” that would help me figure out how to get my brows under control, and find a container to make a “chocolate drone”. The chocolate drone was an idea that @Roger in the virtual coworking chatroom mentioned a few days ago in response to my suggestion that hiding packets of chocolate around the house might lead to heightened excitement (such as one is cleaning the house). @Fluxus thought that this would just make him tear the house apart to find the chocolate, which didn’t seem very productive, hence @Roger’s suggestion of having a chocolate drone delivery system; he’s a research engineer and professor so I naturally took him at his word. I got fixated on the idea of a CHOCODRONE and because I am a kooky designer I wanted to “experience the heightened anticipation arising from the imminent deliver of chocolate”. I don’t have a drone so I figured I could just make a fake one, wrap it in tinfoil, and hang it somewhere over my head so it “hovers” as I work. Yes, this is a SILLY IDEA with little foreseeable benefit. But scroll down later and see what it looks like; I’ll continue the discussion there. The Target parking lot (LEFT) was really crowded; since New Hampshire has no sales tax, our border town malls are swamped by people from Massachusetts looking to save some money.

I stopped by a New England geeky pop culture store, Newbury Comics. This is a chain that started out in Boston I believe, and primarily was a comic book store in the 90s. As geek culture became more mainstream through movies, video games, and animation, these kind of stores started catering less to comics and more to merch. There is one Newbury Comics in my local mall, and I dropped in after completely failing to find anything on my list at Target. An alarming sight was the Wall of Funko Dolls (MIDDLE), which use the exact same blobby humanoid form with different paint schemes to resemble pop culture figures. I don’t particularly like them because it commodifies pop culture heroes into the same form factor. On the other hand, I did see a cool retro NASA Space Shuttle shirt that I will have to go pick up later (RIGHT). 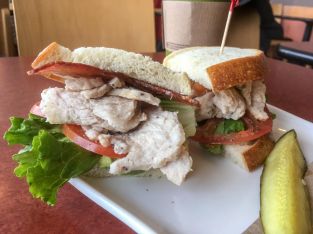 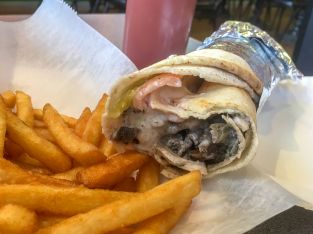 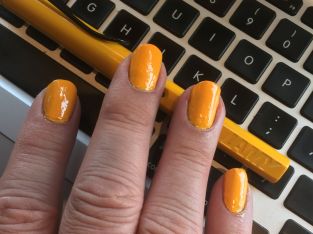 On Sunday I had a design consultant meeting with my friend Joy to talk about branding and logo brainstorming. It’s been a while since I’ve donned the consultant hat, but it was a nice change of pace. I had decided that I would allow myself to eat carbs this weekend, so I indulged in a Panera Bread Turkey Avocado BLT. It was pretty good! The chicken chunks were not overcooked and nicely seasoned too. For dinner I went to a local Lebanese/Mediterranean place and ordered a Beef Schawarma with some seasoned fries. I was good and didn’t eat ALL the fries too!

Then on Sunday night I decided to redo my nails with a yellow that matched my fountain pen. Some readers might remember my yellow Lamy Safari from several years ago, when I was carrying it around with me all the time. I screwed up the polish, though. The yellow isn’t very opaque and required several passes of the brush, which I messed up consistently because of my poor close vision. Next time I need to use some kind of large magnifier so I can see what I’m doing. The thick layers of polished dried unevenly and took a long time to solidify, so it looks terrible. I might redo them again, but it’s a significant time commitment to do.

I showed the nails to my gender identity therapist on Monday, and she said they looked ok if you didn’t look at them closer. The session itself was pretty great because I was in a good mood, having recently come to a good understanding of my personal mission last week. The mission goals reflect my beliefs and my identity. The gender part is not a major player, but merely is an aspect that is part of my personal truth. And since finding one’s personal truth is a big part of what I love to see, dealing with gender identity is part of the process. I am starting to get comfortable with possibilities like “non-binary”, “gender non-conforming”, and now “genderfluid” to understand what is going on and not be burdened by it. I don’t see being positive, optimistic, and skilled as a gender thing at all, but the way I relate to people might be in some sense. Overall, though, I feel I have a handle on it and am actually feeling really good. 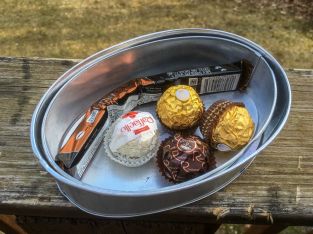 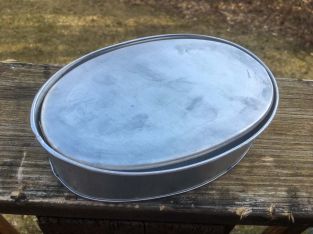 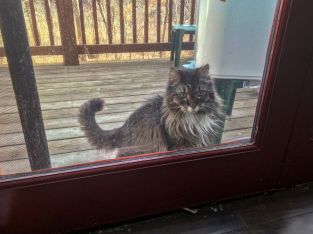 Back to the Chocodrone. Although Target had failed to provide a suitable container for the chocolate, I happened to see these tin molds at the Asian market I frequent. Joy, who owns the store, said that her Filipino customers buy them to make a traditional pudding in a double-boiler. What I liked about the tins is that they looked handmade in a way that would add credibility to a chocodrone prototype. They were also inexpensive, and I was lucky to find one that was a little bigger than the other so I could make this shell. I’m going to wrap up the whole chocolate thing with tin-foil, which I’ll do on the LIVESTREAM I have yet to do.

Lastly, here is a bonus image of my cat finding himself trapped outside on the porch (RIGHT). It was quite window and the door slammed shut behind him. Poor kitty. 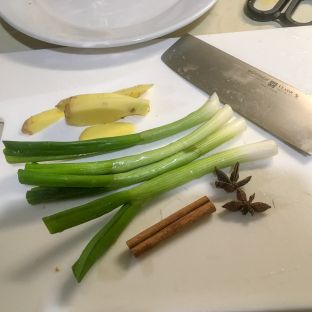 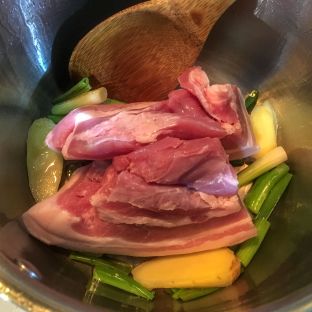 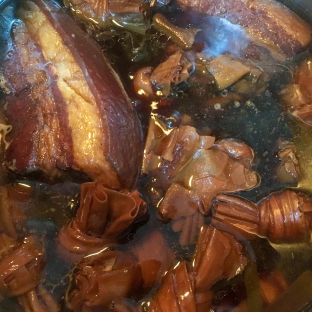 I’m making some braised pork belly tonight also. No sugar. Just soy sauce, ginger, cinnamon sticks, anise, and some green onions. Here I am searing the ingredients. There are these interesting bean curd knots that I added to the liquid to soak up the flavor. I’m going to add peeled hard-boiled eggs to the sauce to make Lu Dan, a flavor-infused treat that I really like.

As far as work stuff:

See some of the stuff I’m talking about on video! The end result of the pork belly braising, with mysterious bean curd knots! A closer look at my uneven yellow nails.