Saturday’s GHDR Goal reflects my recent desire to slow down the pace…accepting incremental progress on website updates! I deliberately picked something to do that was more incremental, and for once I was actually OK with not finishing it. Instead, I felt good about making a good chunk of progress that would likely resolve in a couple more days of work. In the past, I would have been incredibly impatient and displeased with the lingering work. I don’t know what’s changed…maybe I’ve finally worn myself down, or listening to The Bird and the Bee on endless loop put me in a good mood.

In addition to the incremental progress on the website, I’ve made a few process improvements that are worth sharing.

Yesterday I acknowledged that my website doesn’t keep up with my workflow, noting that this lag been a constant irritation for the past few years. For people visiting the site, the speed is probably OK because they are hitting high-speed cached copies of content, but when I am writing new stuff the cache doesn’t help me. Saving and updating posts takes several looong seconds, as does processing thumbnail images and post-meta updates. It makes me not want to do anything on the site.

I have two choices: either (1) move to a faster platform than WordPress which would involve porting a zillion posts and comments and custom pages, or (2) speed up WordPress so it isn’t chugging so much. For now, the easier thing to do is to speed-up WordPress. I’ve done just about everything I can to optimize the existing platform, so my next move is to upgrade my server from the current (and obsolete) (dv) 4 on MediaTemple to a (dv) developer level 3. My current server technology on the (dv) 4 is four years old, so moving to the newest equivalent service should be a big boost. Unfortunately, this means doing a server migration from the old to the new; it’s has not been an automatic process for me because of the number of sites hosted on my main server.

So today, I did a couple of things:

Neither task achieves the desired end goal of “moving to a new server”, but these two tasks and their enabling decisions make the future tasks a bit easier.

I also made a minor improvement to the default post thumbnails, replacing the black default to a lighter-colored SEAH version.

Additionally from now on, thumbnails will be used for posts detailing something made. I think this will highlight “tangible stuff to look at” articles for readers who are more interested in “stuff” than “process”. Why? Personally, I dislike it when click-bait websites post a picture for the sake of having one, and have been particularly irritated at how my Twitter feed has become polluted with images in general.

A contributor to that feeling of satisfaction is, I think, a feeling of contentment from having adopted Quiver (a “programmer’s notebook” somewhat like Scrivener and Evernote) as my main continuity journal of all things. Here’s a screenshot of it from late Saturday: 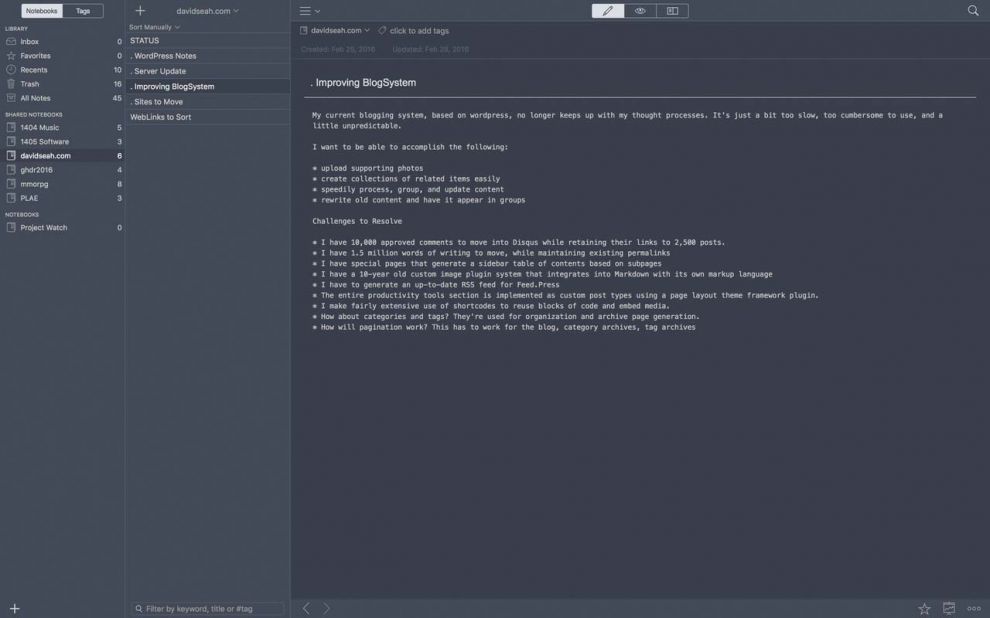 Ultimately, I’d like to start moving refined pieces of knowledge from Quiver to the website, but that will have to come after the server transition is complete.

So while not a lot of shareable work was produced for posting on the blog, I did make some good progress on breaking down the hairy server move problem into more relaxed steps. And because I am now using Quiver as a continuity journal, I am feeling very confident that I can be more focused and productive when switching between projects. A big challenge still is JUST STARTING the work, but at least the continuity journal helps capture the random things I do as a consolation prize.