A few years ago I tried growing tomatoes on my deck, since I didn’t have my own dirt to plan a real garden. I’d never grown tomatoes before, but understood that they required a LOT of watering, especially in the summer months. This was going to be a problem because I had several work-related trips that summer, so I built a self-watering sub-irrigation planter out of some plastic totes. They’re similar to the Earthbox planters, but at the time I wanted to try to make one myself.

The water supply worked really well, allowing me to water only every few days even during the hot summer months due to the efficiency of the planter. In fact, it worked TOO well. The tomato plant sucked up as much water as it wanted, and as a result the fruit grew so fast that they split their skins. This is called “catfacing”, and it’s unsightly. I also got hit with some kind of fungus the second year, and had to buy a copper-based spray to treat it, but it was too late. I skipped last year having grown disheartened by the ordeal, but this year I’m ready to try it again with a new planter design. 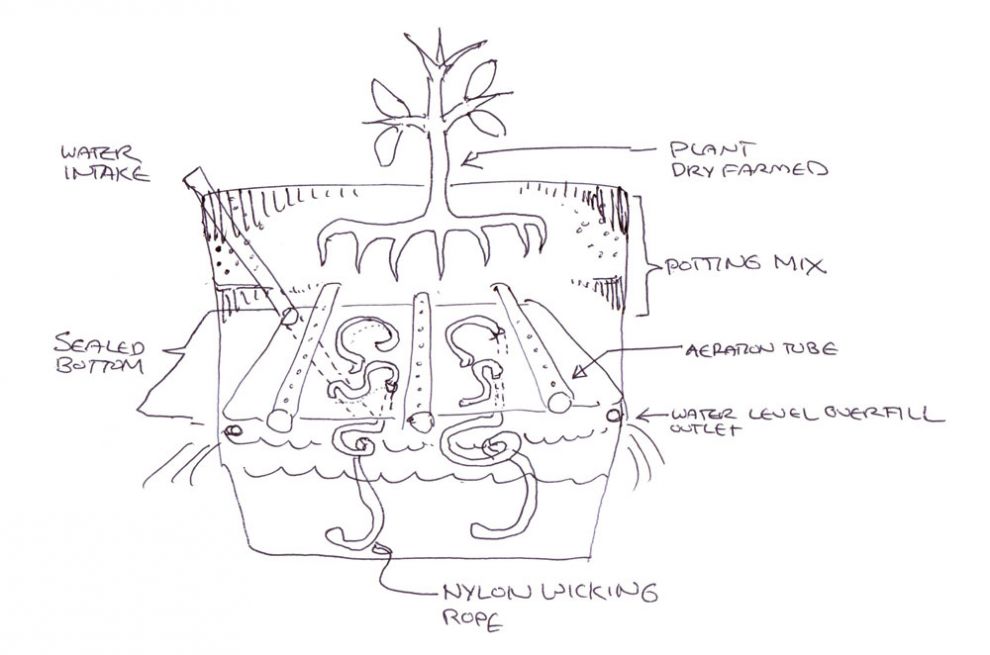 To control the water supply, I’m going to try to restrict it using a different feed system. Rather than have a column of potting mix go directly into the water, I’m going to separate the chambers and provide water through capillary action. The rope, hopefully, will wick water up to around 9 inches from the water supply, which will go through holes in the bottom of the upper dirt-containing box. The diagram doesn’t show the construction that well, but I’ll followup with actual pictures.

I’m not too concerned about the limited water supply because of a technique I’ve read about called dry farming. You get less yield and smaller fruit, but the flavor is said to be more intense. I don’t eat that tomatoes anyway; the part I like about the deck planters is seeing something alive every day when I look outside. If I get some fruit out of it, that’s a bonus!

So that’s the plan. This quick blog post is here to remind me to get off my butt and get the planter put together; it’s already June!