The Quest for Tomatoes

One of my long-simmering projects has been the quest to grow my own tomatoes. Since I live in a condominium and don’t like touching dirt, dealing with bugs, or bending over plants on my knees, it’s taken a while to muster to energy. I usually like to appreciate nature at a distance, preferably from the bay windows of a well-appointed cabin furnished with an adequate number of gourmet kitchen appliances and high-speed Internet in every room. When preparing to go outside for a hike, my favorite part is picking the trail mix. It’s probably not surprising that I just go straight to Trader Joe’s and buy the trail mix, and skip right to the eating without the trouble going to the countryside.

Still, I love the idea of eating something I’ve grown myself, and because I know a lot more green-thumbed people these days, I’ve been inspired to do something about it. I’m also utterly charmed by the idea of upside down tomato planters, which I first encountered in the Sky Mall catalog while on a flight to Chicago. I thought the planter was too expensive, but the idea of having a standing garden on my deck exploding with tomatoes is a vision that has stuck with me. It doesn’t hurt that the idea is a non-traditional and a little weird. 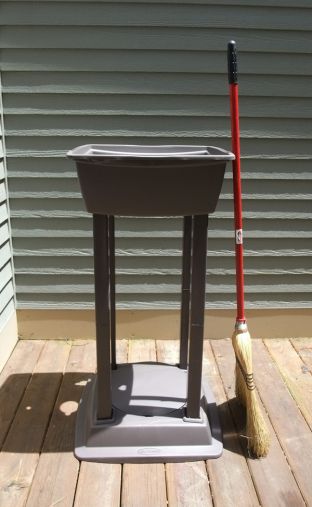 In the years since I first saw that catalog ad, upside-down tomato planters have sprung out of the DIY movement and into the mainstream. I bought a ready-made solution for about 45 bucks, an endearingly-plain self-standing model from Suncast.

It arrived several weeks ago, and I forgot about it until an acquaintance of mine posted a picture of their gigantic tomato plant, and I was struck with panic…did I already miss the tomato season? Apparently not, as my hasty visit to Lull Farm, the local farm stand I like, had many offerings out. It was at that point I realized I knew nothing at all about tomatoes other than how to eat them, but I gamely asked the grizzled Jamaican fieldhand for a six-pack of “Big Boy” sproutlings (about two dollars), and brought them home. Here’s what they looked like a few days ago: 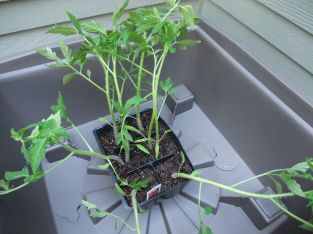 After a rare moment of appreciating the wonder of green things, I became filled with dread. What have I gotten myself into? I’m responsible for these plants or they’re DIE! I lept to Wikipedia and Google and did some deeper searches on tomatoes and upside down planting. It turns out that I wanted something called a “determinate”, which grows like a bush and stays within a certain size, compared to the “indeterminate” types with grow and grow. Oh well…making mistakes is part of the adventure. I also read that tomatoes require watering every day, but it was important to not overwater. I hadn’t considered the whole watering problem, but fortunately I had recently rigged a way to have a garden hose on my deck so I could rinse my Cobb charcoal oven with it. However, I am also going to be travelling for work in July for a week.

So right now, I’m looking at a few solutions for automated watering that do not require continuous water hookups. I looked briefly at gravity drip irrigation systems, but these rely on pressure provided by raising the water reservoir high above the plant. There are vacation plant watering systems that rely on a central distribution point and electric pump, but they appear to be designed for indoor house plants that don’t have the huge water requirements of a tomato plant. Plus, the tomatoes are outside on my deck; I don’t want to run power or hoses through the screen door while I’m away.

An alternative approach to pumping water is to rely on capillary action, which draws water slowly through a porous material. I ordered some watering probes from Amazon, which I will stick on top of the planter with a water reservoir and see if that’s enough to keep the plant going. No power or elevated water reservoir required, and capillary action also can draw water UP from a reservoir (there is some degradation of performance, I’m told, but we’ll see). I’m also building something called a sub irrigated planter, which have also become popular through companies like Earthbox and the DIY community. I’m going the DIY approach, carving up an 18-gallon plastic tote bucket to form the essential elements: a water reservoir underneath the potting bed with a layer of air separating them. The irrigation works through capillary action, using a “potting mixture wick” to draw the water upward. The layer of air is for helping aerate the roots. If you look up sub irrigated planter or DIY earthbox on Google, you’ll find plenty of examples…it’s a pretty cool idea that is claimed to use 75% less water than other methods. I’m planning on putting the other tomato sprouts in these planter as a comparison, and with luck the water reservoir can keep the plants alive when I’m away.

(Follow-ups posted to my food journal)