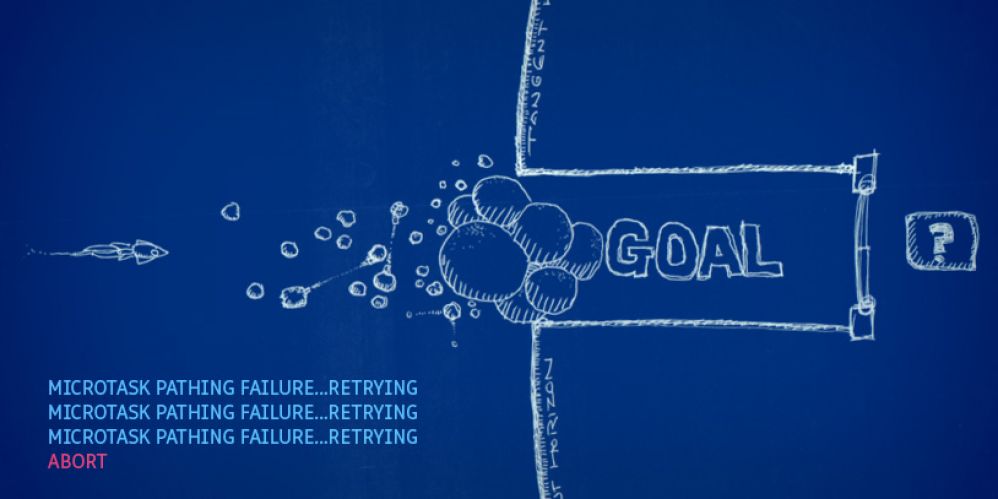 Today would have been Day 12 of the Microtask Challenge, but I’m calling it a dud. While the idea of microtasks supported with specialized worksheets is cool, I am finding they don’t address the actual problem I’m trying to solve: making sustained, regular progress on my personal projects. My will to work is being sapped before microtasks have a chance to kick-in.

To recape, the hypothesis behind microtasks is that any action at all, no matter how small, tends to result in sustained effort over a period of time. When working completely by myself, the challenge for me is getting over the threshold of starting. I thought that making the starting threshold ridiculously small might work, if I was able to accept that even ridiculously small tasks were worth swinging at. The psychological hurdle, I thought, was that I thought small tasks were dumb.

While the approach seemed to work for the first week for exploratory tasks, it completely failed to ignite progress on the main challenge: making progress on my game programming project.

A Failure to Ignite

Let me start first by setting the tone for how I’m looking at this failure: it’s expected. While it would have been wonderful to proclaim to the world how awesome my idea was and prove how super-productive I am, that’s not the way we roll here at Dave’s Laboratory. Here we face the truth as best as we can, and learn from it. It’s important to acknowledge failure with confidence and even a bit of pride at having tried something different. Sure, I’m a bit disappointed that I didn’t get any meaningful work done on my programming project, but it was worth swinging at.

With that framing statement out of the way, let me summarize what I believed were the main challenges I was facing:

From a conceptual perspective, these two approaches are potentially useful; I may work them into an Emergent Task Planner™ supplementary form package. However, after this last week I’ve come to believe that microtask sheets are not the right tool for me right now.

While I have been telling myself and the world I want to be working on my cool life-enhancing personal projects, the truth is that I did not want to do the work. I find programming by myself to be tedious and boring. The very thought of jumping into a programming project sends my the squishy-feely side of my brain running off to the nearest distraction, screaming, Don’t put me in the box! Don’t make me shrink to fit inside it! My rational side sees this behavior and tut-tuts it away, confident that the projects are worthwhile and rewarding in the long term. But what it comes down to is if there is nothing coercing me to do the work, then I just won’t do it. Who does something that they don’t want to do if they don’t have to? Those would be the successful people who enjoy pushing themselves and meeting challenges of their own making. Me, not so much, if it’s just me.

Microtasks were conceived as a way to try to find motivation from within by tricking my recalcitrant squishy side into starting the work, like dragging a kid to a museum or promising cupcakes for finishing a book. I have pretty much always been like this when told to do something that is “good for me”, and apparently the same resistance applies even when I am the authority figure.

At this point, I’m going to throw up my hands and just declare that “Dave is clever but needs a strong source of external motivation to be a productive member of society.” Reviewing the past two weeks of procrastinatio might give me a clue as to what that external motivation might be:

As I review the above list, the negative feelings and resentment stand out to me. I don’t want to be a resentful person, but my thoughts turn that direction when distracted by other people’s needs. This is at odds with the desire to connect with some kind of tribe of my peers. Even when I am binge-watching Deadwood or playing Wildstar, I’m looking to connect with characters and their stories. I guess the easy label to apply would be depression. I’m not that excited about doing a lot of programming work, and I don’t want to take responsibility for other people’s problems, so the result is escapist behavior. My brain is seeking something that feels like connection, I think.

I find this very interesting. At the moment of this writing, my heart is paralyzed by relationships with people. On one hand, I want to be left alone by people and their demands. On the other hand, I want to connect with people. I want to be left alone because I perceive people as a threat to the sanctity of my time. However, I apparently also want and even need to be around people, because I crave warmth and a sense of purpose that is shared.

Pause before Deciding Next Steps

I’m not going to make a decision about what to do next exactly, but at least I think I have a good handle on what’s been bothering me. I have always been a bit neurotic around people. Can’t live with ’em, can’t live without ’em! Before I sign-off on this post, I’ll brain-dump a pro-con list about people and see what comes out.

As I look at that list, I feel that I am sort of terrible person for thinking this way, and wish I didn’t. I apparently have some internal work to do. On the other hand, it’s perfectly allowed to have personal beliefs. What I worry about is letting the negative feelings influence how I deal with individuals. What I’m describing above are generalizations, and I would be a huge ass if I were to assume less than the best of new people that I meet. Maybe this is why I find interacting with people so exhausting.

Anyway, I’m going to let this stew for a while, and try to come up with another course of action on Monday.