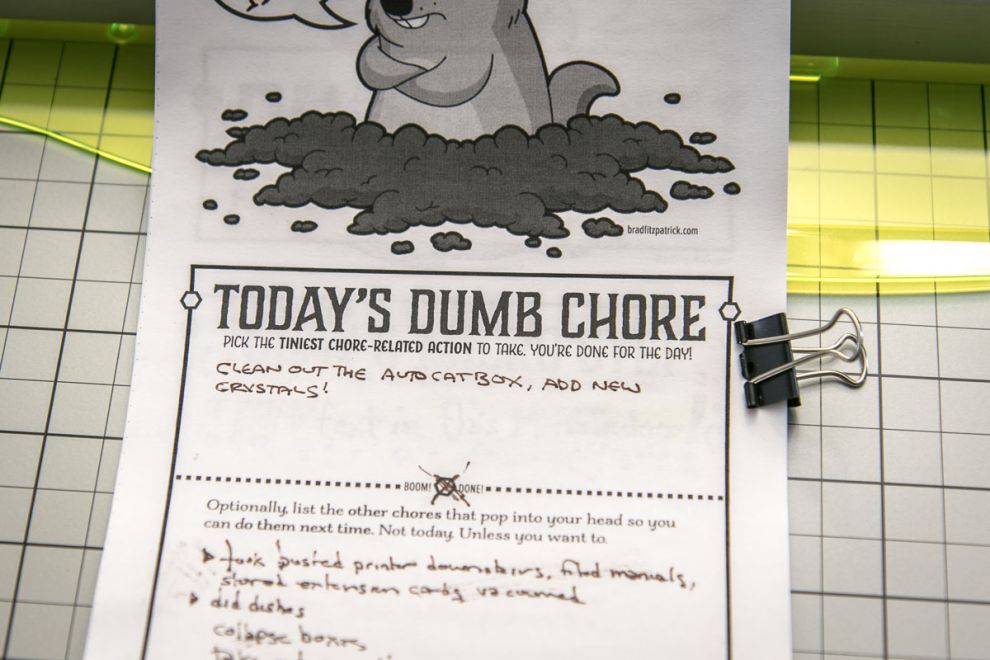 For today’s MicroTask, I made a variation of yesterday’s MicroTask sheet. I was experiencing extreme sluggishness, and woke up around 4:30PM. To be fair, I went to sleep at 8:00AM, not wanting to go to bed like a recalcitrant child but possessed of full adult authority.

With the day mostly lost and a big social event looming early tomorrow morning, I was feeling very negative. I can barely stand sitting here and typing the day’s report. However, I was able to squeeze out a Today’s Dumb Chore sheet, and substituted it for the regular version. My chore of the day was to refresh the automatic cat litter box in the basement, which was getting noticeably ripe. After that, I did a few more tidying chores and wrote them down. I’ve been noticing that as these sheets accrue, they seem to reinforce positive feeling toward daily action. Perhaps there is something to Jerry Seinfeld’s Productivity Tip ‘Don’t break the chain’ after all.

On a whim, I added a reward box to the bottom of the chore sheet that suggested seeing the new movie Ex Machina tonight, but it turns out that it’s only in limited release. Sigh. I like the idea, though, of the reward box.

One last thought: I’m envisioning a series of different “microtask” sheets for different moods and challenges. There are multiple ways that one can use their brain, and multiple kinds of tasks. It might be cool to have a set of 12 different microtask sheets that fit together as a system.