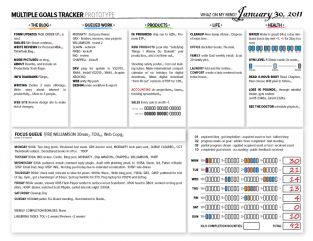 Here’s last Sunday’s concluding tracking form, ending two weeks of mindful productivity tracking with the new “multiple goals tracking (MGT)” form. And I’ve had about enough of it. While I like the idea of it, I believe the form is trying to do too much, so I’ll have to address this in the next iteration. Thoughts follow.

Let’s look at the numbers first: week two ended with 92 points, compared to the previous week’s 113. There was a drastic drop in points toward the end of the week, which corresponds to my growing increasingly tired of tracking points without having accomplished anything that felt conclusive. Memory is so fleeting, though…let me list the major accomplishments of each week:

WEEK 1: Did finishing touches on a client’s website, and invoiced for it. Checked out some new e-product ideas, Added new Amazon product, posted a screencast, took care of my house insurance for the next year, created a whole new form, and made some significant progress on other WordPress sites.

Looking at this, I can see I’ve been busy, but I also am not feeling like anything got completely finished, in the sense that I could climb into something new and drive it away under its own power. There isn’t anything completely new I can point to that feels like a new asset, with the exception perhaps of the CGT page improvements. This is something I need to address in future application of the MGT.

Maintaining That Sense of Completion.

The tracking form made me aware of how much work I was doing, and how much time I spend actually being in what I would call “soft productivity” These are activities that fall in the 1-2 point range, which are related more to future possibilities than current deliverables.

Toward the end of last week, I started to feel mentally fatigued from spending so much time thinking about what I was doing to be more productivity. By Thursday evening, I was kaput. I spent the next few days sleeping and watching TV on Hulu. My mind did not want to engage. It was difficult, in fact, to get out of bed this morning and start planning, even though I knew there were many things I could start working on.

And perhaps that’s the problem: there are TOO MANY THINGS. Leo Balbuto says in his “Zen to Done” book that one should work on only one thing at a time, and I’m inclined to believe this from the perspective that it’s a more efficient use of one’s attention. Of course, my problem is that I have an unruly attention mechanism, easily distracted by the inherent possibility in everything that my gaze happens to fall upon. Secondly, there was a LACK OF MEANINGFUL FEEDBACK in week 2. No new website traffic. No new products. No affirmations that the path I’m on is the right one, or is even leading to something more fruitful. This is not conducive to maintaining good morale.

The daily forms did do one thing well, particularly in the first week: it gave me the peace of mind that I had captured everything that was important to me that week. That gave me a baseline of desire against which I could measure actual achievement. Toward the end of the two-week stint, it became obvious that progress was going to be very slow, and I would have to recalibrate my expectations. This was demoralizing, and whatever peace of mind I had before was replaced by the sense that I was falling behind, not fast enough, and that my efforts were not paying off as quickly as I wanted.

To move forward in the evolution of this form, I think I need to split it up. I’m envisioning keeping the silos as an overall “what I want to do” form, and then a daily tracker that lists only a specific task in each area. This reminds me a bit of the approach taken by Agile development teams, particularly the SCRUM approach, where one maintains a “product backlog” and a “sprint backlog”. The product backlog is just a list of everything you’d like to see featurewise, and this corresponds to what I’d like to do with my life. The sprint backlog is the list of things you’ll be doing in the next chunk of time (the “sprint”). What I like about this is that one can stop worrying about the big picture and do the implementation; the deeper introspection is deferred for a week or two.

I’m going to take a break from the form for a few days and move back to a very targeted list of just two items:

All other ideas will remain on the 1-30-2011 journal form. After that, I will review my overall list and refactor the Multiple Goals Tracker form next week.

Past Articles in the Series