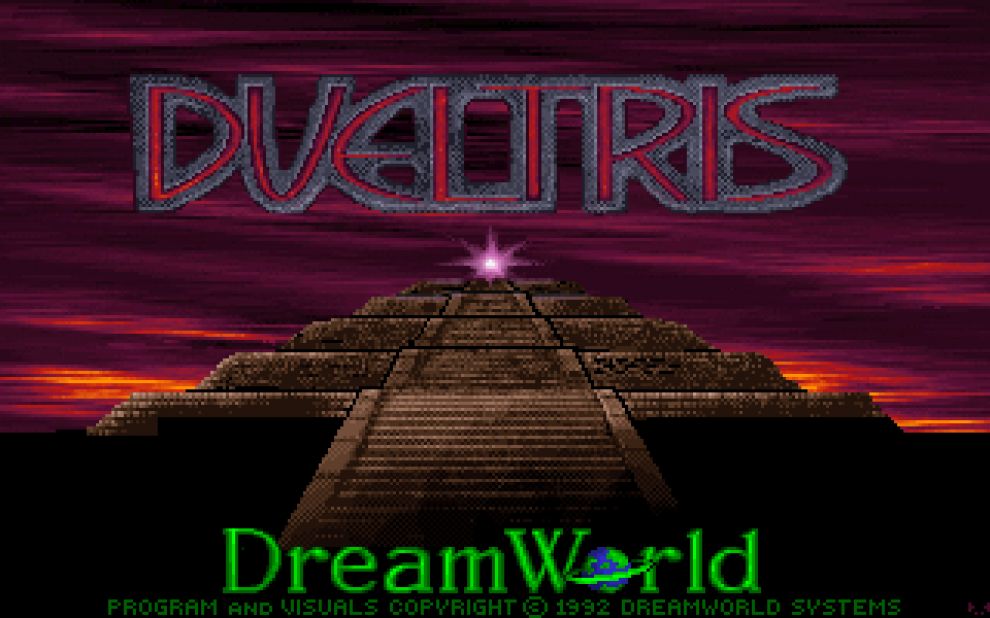 DuelTris was a game for the Apple IIGS, a 16-bit computer that was somewhat popular from 1986-1990. I met the programmer through AppleLink: Personal Edition’s Apple II Art & Graphics Forum (AGR), and we produced this game. It was a minor hit in the Apple IIGS shareware arena, and I actually made a small chunk of money from it. It was this experience that gave me the idea that I might be able to make a go at doing graphics professionally; this was just after graduating with my Masters in Electrical Engineering and not feeling too good about it.

All the graphics on the Apple IIGS’s best color mode were 320×200 with a maximum of 16 colors per scanline. With tricks, you could have up to 16 zones of 16 palettes. The main screen used an even fancier trick to get a 3200-color mode, though it’s limited to 256 colors in actual use.

All graphics for Dueltris were done with the Apple IIGS version of DeluxePaint II Enhanced, still one of my favorite programs for it’s excellent pixel-level control. Photoshop still can learn a thing or two from this venerable program (hint: Photoshop’s pixel tools suck by comparison). However, the title screen did make use of the IBM-PC version of DeluxePaint for adding the sky colors and bottom logo green. The resulting 256 color file was then run through DreamWorld’s tools. I could be misremembering this…

Note: Most of these screens for the Apple IIGS will look kind of squashed (this is particularly noticeable in the other portfolio sections). That’s because pixels on the IIGS were 20% taller than they were wide, a vestige of that machine’s compatibility with television video. Also, these GIF files were scaled by 200% so you could actually see them on a modern computer. They will appear quite chunky, but on the IIGS the graphics were smoothed out. 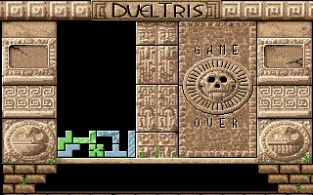 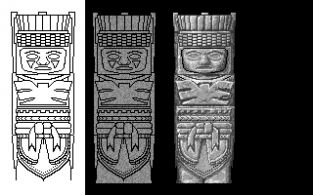 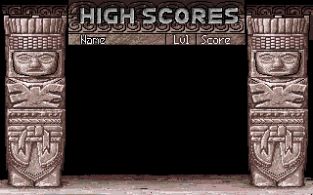 The main playing screen uses 16 colors, except for the bottom row, which used a separate palette of 16 colors to introduce more greens. The high scores screen on the right show the progression from flat line art to filled 3D.

Note: The statues are based on a book on Incan architecture. Why Incan? At the time, I think we were trying to get away from looking like every other “falling blocks” style game. I remember doing a “high tech” version that didn’t look quite as good…lacking the colors for nice metallic effects there. I wonder now how DreamWorld really felt about the stone look. 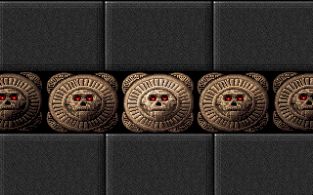 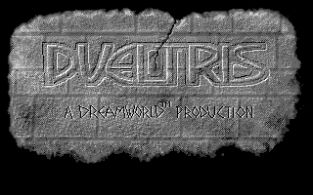 Some more graphics from the screen. The Album5.gif never appears in the game…it’s something I just put together because I thought it might look cool, and I liked the sunface thing I had made in the game. This one uses all 16 colors, which the game screen version couldn’t because it had to share colors with the blocks. The credits screen appears when you quit the game, or you look at the credits. I can’t remember anymore.