Happy Monday! This is one of two “daily status” blog posts I’ll be doing this week. By limiting the number of blog posts, I’m hoping that this won’t create a flood of updates every day while still maintaining a sense of continuity for readers who are wondering what I’m up to. I am thinking of these daily posts as my “hanging out with my friends on the Internet” time, sharing stories and other discoveries. This week I’m going to be focusing on pounding out some billable work, so the twice-a-week schedule will help me allocate entire days toward that.

Read onward for a look at what I’ve been cooking, productivity tips I’ve been trying, and TV shows I’ve been binge watching!

Mental Balance and Other Improvements

I’m on my second return to the gym week! Last week I went four times. This week I am going to do a minimum of four short visits as part of a morning ritual to anchor my day. I’ve been spending more time at Starbucks afterwards, and a bonus has been getting reacquainted with the current staff so it’s starting to feel more like “my place” after a long hiatus. After an hour or two, I head back to the home office where I have all my fancy multi-monitor computer gear.

This is also the second (third?) week of sticking to a low carb diet as a strategy for recovering my mental clarity. I experimented a bit with small amounts of sugar, but even in small quantities there is a noticeable increase in distressing brain fog. So I am choosing NOT to imbibe of carbs, unless it’s the weekend AND if I am willing to suffer a diet-related breakout of facial acne. GROSS!

An upcoming challenge is working Patreon and Ecommerce design work back into my mix of projects. Right now they are all stalled as I try to balance health and billable work. I am hopeful that the more reliable mental clarity I’m experiencing now will help me get back into the groove.

Over the weekend I finally hung the artwork I framed several weeks ago. This involved learning how to tie a good knot with picture wire and deciding where to put it. 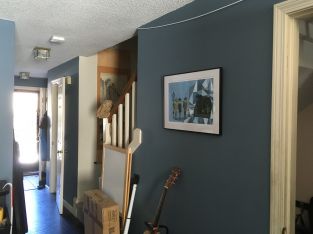 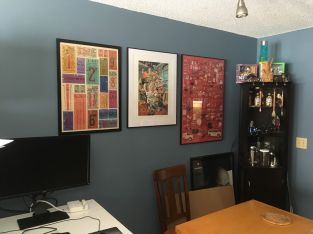 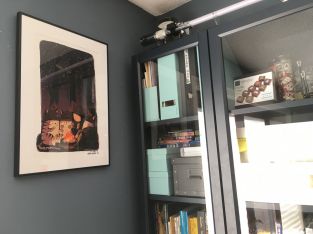 There are three locations which are scattered around the main floor of my condo. The blue “cafe” print is one of the first pieces of art you see, and then there’s a smattering of comic prints on the opposite way. The last comic print is next to the shelf in the living room part of the cafe. You can get a sense of the first two from this panoramic picture:

Over the weekend I also went to visit our local ethnic markets, consisting of the Mexican butcher, a new Halal market, and finally my regular Asian market. The bottom-left picture shows an intriguing variety of Pakistani deserts at the Halal market.

After visiting the Asian market, I stopped by the SubZero Nitrogen Ice Cream franchise next door to get some licorice ice cream with maraschino cherries, two tastes that are surprisingly compatible! It would have been great with fennel seeds and pistachios, but these were not toppings that SubZero carries.

Finally, I got to try out the Sweet Potato Buffalo Chicken Casserole that @Jess in the Coworking Chat linked a few weeks ago. The verdict is that it is simple to prepare and delicious, though I think I will modify the cooking times when I make it again so the sweet potatoes are softer without overcooing the chicken. 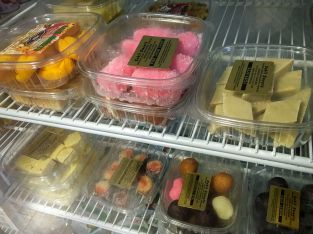 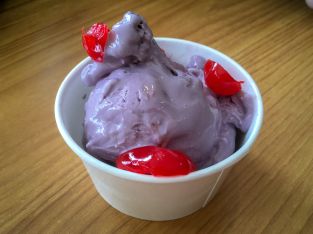 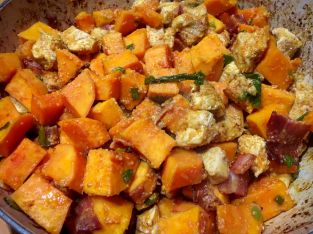 I mentioned the search for a kind of “Muse” I could be in the last Dailies post; The idea had been inspired by watching the computer-generated American-produced anime RWBY, which I have really grown to like. If you’re curious about the series and don’t mind spoilers, here’s a pretty good summary of RWBY for the sake of context…but I digress! I think I know what kind of Muse for the 21st Century I could be!

It’s The Muse of Happy Bubble Time! I’ve written about Happy Bubble Time (HBT) before, and I will write a more detailed entry of my CURRENT understanding soon. I like the whole idea of HBT, and I think it could serve as my anchoring personal brand as well. It would be a good name for a podcast. That is really the major insight of last week.

That’s it for now. As I said, this is a week for major billable hours, and I’m looking forward to having a strong work day tomorrow. I am planning on getting an EXCELLENT night’s sleep so I can hit it fresh early in the morning. That’s it for now, thanks for reading, and I’ll talk to you tomorrow!