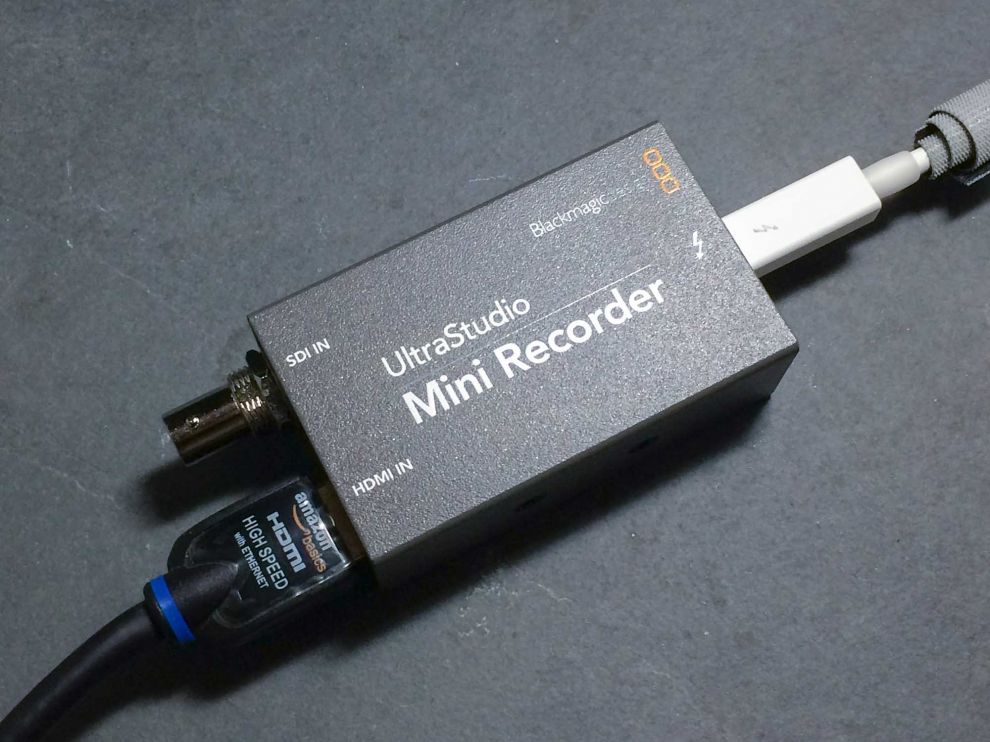 I’ve really enjoyed livestreaming from my YouTube channel this past month. Lately I’ve been trying to add more camera sources that I could switch between different views as I moved around the space. After a recent livestream, Jamie on Twitter messaged me to tell me about his uber-awesome livestreaming setup, which is portable and makes use of GoPro cameras and other high-quality HDMI sources; it’s the step-up from what I’m doing with consumer webcams and free software.

One of the devices on Jamie’s list was the Black Magic UltraStudio Mini Recorder, which is a tiny Thunderbolt box that accepts both HDMI and SDI inputs! HDMI is the standard that big screen TVs use these days, and SDI is a “professional standard” that I’ve not used; what’s important is that my camera outputs HDMI and this little box can feed it right into the Macbook Pro, where Open Broadcaster can use it as a video source! And because it’s Thunderbolt, it doesn’t use up a precious USB port on my Macbook Pro, which was a limiting factor. It so happens that my Canon 7D Mark II DSLR is supposed to have really nice HDMI output, so I fiddled around with it while livestreaming and got it working, which happened at the 16:28 minute mark in this video:

The result: HDMI input into a livestream on youtube! I can switch between my desktop where I’m doing design, and use the high-quality imaging of the DSLR to show things up-close and beautiful. As far as I have figured out, the trick is to first run the Black Magic Desktop Video Utility (installed from the SD card that’s packed-in with the Mini Recorder) to select the HDMI input and (I think) initialize the device over the Thunderbolt connection. After that, you can add a “Blackmagic Device” in OBS Studio directly to a scene.

I’m looking forward to seeing how to use this in upcoming design-related livestream with other project collaborators in my workspace! Woo!