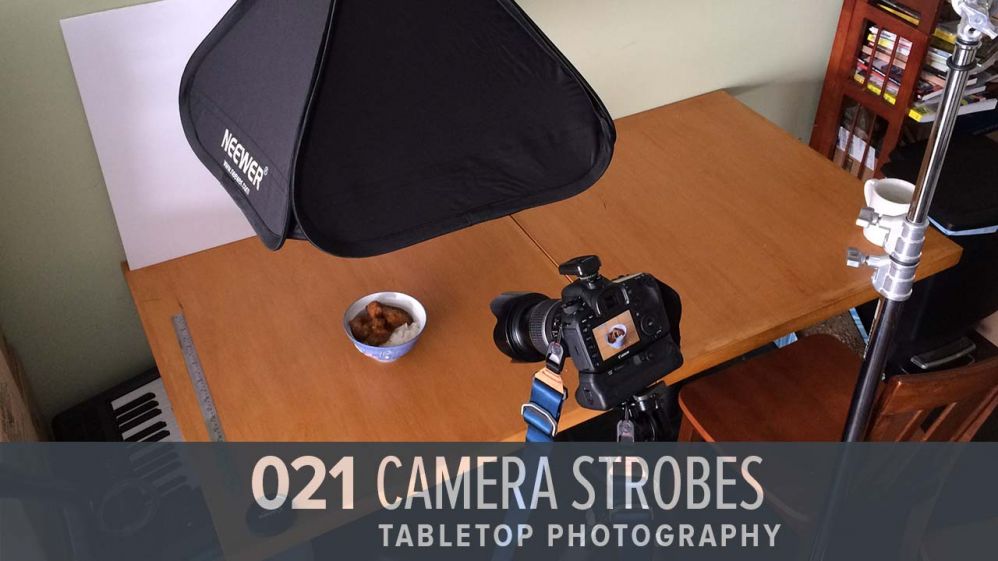 I spent part of Monday cleaning up the living room, mopping the floors and clearing the tabletops. Once the tabletop was clear, it reminded me that I wanted to setup my off-camera flash strobes again so I could take more photos of things I liked to share on the blog, including product photos of everything I make. But that meant I had to fix my old flash radio trigger, which had died a couple of years ago before I got my current camera. Time to screw around with photography!

The Glory of Off-Camera Flashes

My friend Sid Ceaser is a professional photographer, and he turned me on to the use of “off-camera flashes” several years ago when I took one of his workshops. I’d seen him carry around a powerful old manual flash and a folding softbox around on a scooter and get phenomenal results; I loved the idea of combining portability and creative lighting for on-the-go shooting. Of course I don’t have his eye for portraits and composition, but I’m finding the same tools handy for shooting at home in a kit that can easily be taken apart and stored until it’s needed.

You can find out more about off-camera lighting at blogs like Strobist, but the general advantage of it is (1) flexibility in light placement and (2) beautiful diffuse directional lighting. One of the worst things you can do with a camera is to use the on-camera flash blasting directly at your subject. This produces harsh unflattering light, red eye, and just looks awful; the number one photography tip is to turn off the on-camera flash and learn how to hold really steady in good natural light. Ideally, you have bright light that is directional, but not harsh. I often will take pictures of food by positioning them near a large window on a sunny day, making sure that no direct sunlight is coming through it. But for those days when you can’t be near a large window on a sunny day, that’s when controlled studio lighting is your friend. There are generally two kinds: strobes (flashes) and continuous. The great thing about continuous lighting is that you can actually compose your picture with the actual light you’re using, and it’s easier to see what you’ll get. Prices and power have improved tremendously in recent years, and it’s great for interacting naturally with the subject to light it just so. By comparison, a flash generally requires you to take a picture to see what you’ll get, but has the advantage of being (1) much brighter, in general, than comparably-priced continuous lighting systems and (2) freezing action for moving subjects. If you’re shooting video you pretty much need continuous lighting, but for photography the use of flashes is still pretty awesome even in this day of super-high ISO (allowing shooting in dark conditions). 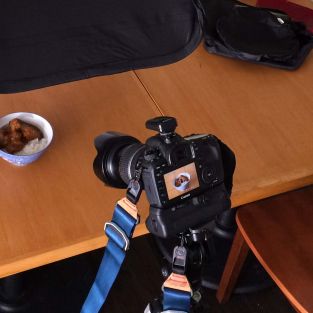 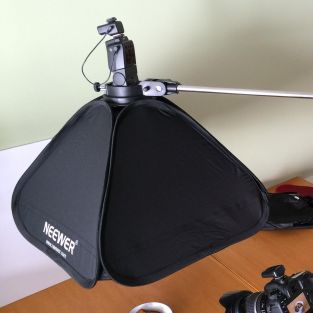 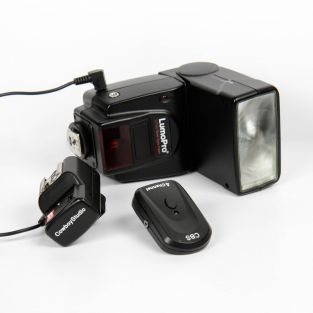 My current rig is a mix of cheap and expensive gear. The camera, a Canon EOS 7D Mk II, was an expensive upgrade from my old prosumer-grade Canon EOS 40D DSLR from 2007; I wanted to stay in the “APS-C” sensor line to use my existing high-quality-for-the-price EF-S lenses. The flash, a cheap but powerful LumoPro LP160 from 2011, is nestled in a new Neewer 24×24 inch Softbox which cost only $35 but is pretty well designed. Since the manual flash is not directly connected to the camera, a Cowboy Studio transmitter/receiver (around 20 bucks) triggers the flash remotely. The combination of softbox + flash is mounted above the tabletop using an Avenger 40″ Century Stand, a really stable and flexible light positioning device that is totally worth the $115 I paid for it. It’s the kind of gear that makes you happy every time you use it and it STAYS EXACTLY WHERE YOU PUT IT unlike cheaper stands.

For a test shot, I took a picture of a bowl of slow-simmered Rendang Beef Curry made from a pre-mixed package: 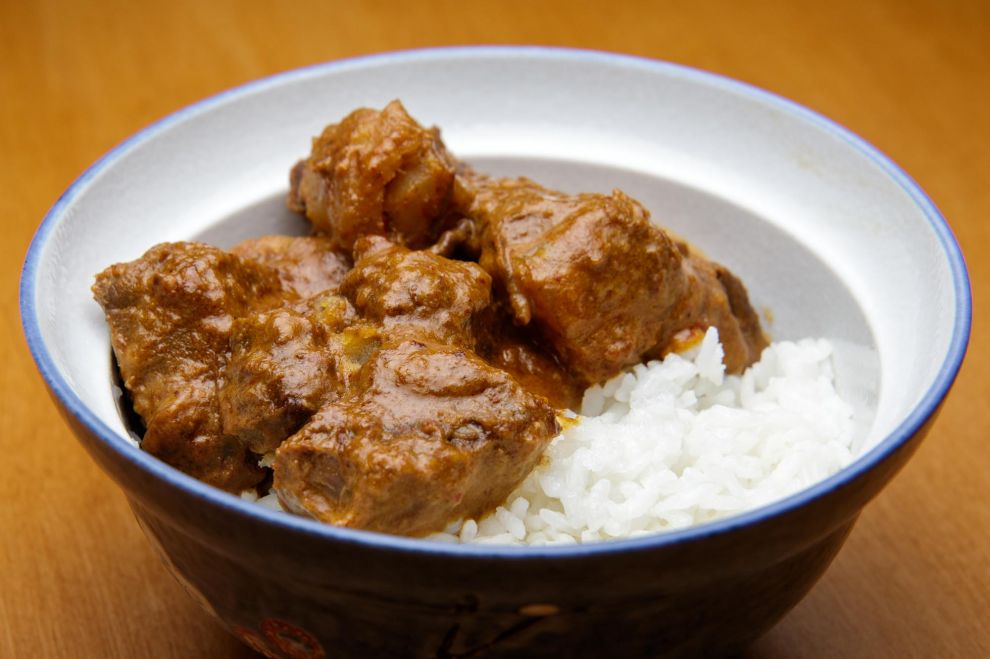 If you’re curious about the curry itself, check out the flickr album, otherwise note a couple of things about the lighting:

A less hungry Dave would have messed around with light positioning and reflection, but the primary goal was just to get the radio trigger working again. I had purchased the radio trigger in 2011, and after a few years the special battery inside the transmitter had died. I had ordered a new one in 2014, but never got around to seeing if it worked. Then I needed to find new AAA batteries for the receiver, and likewise charge-up the flash unit itself. THEN I had to figure out how to enable the triggering of the camera’s flash attachment hot shoe so it would fire, as I had forgotten that the new camera had a new “intelligent flash control system” that I needed to turn-off or put into “stupid flash” mode, which of course was completely non-intuitive. But after it was all working again, it all came together and now I’m back in business for some tabletop shoots!

Today’s tasks were, technically,in support the “Creative Business” and “Sharing what I Know/Love” GHDR Goals, as having a working tabletop setup with controlled lighting allows me to take consistently-lit photos of objects at any time of the day. They may not be really beautiful, but they will be clear and I can start to build a collection of Things I Like or illustrate “how to” uses.

Because of the three-for-one utility of this task, today was a surprising 33 points! I also made curry, which might have been a source of points, but since I didn’t share it with anyone there are none to be gained. OH WELL.