Working with an Editor to Create New Works (GHD020) 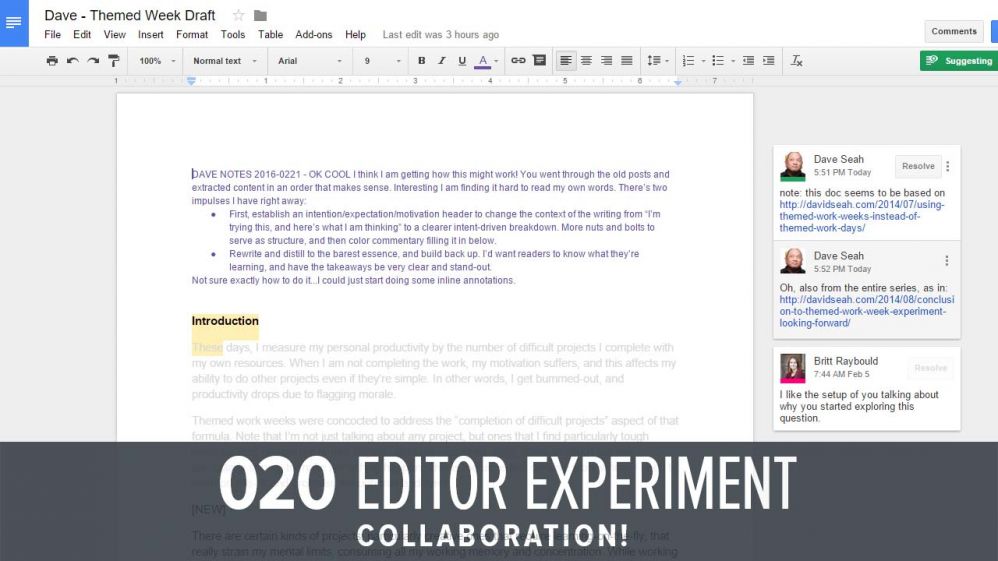 Sunday was largely a day spent writing in notebooks and private discussions, but I did finally get to start working on a new writing project with my friend Britt Raybould, a professional editor who shares my fascination with process. She’s agreed to help me learn what an editor can offer to a spazzy writer like me for an extended collaboration.

Some time ago I had a conversation with an editor (it might even have been Britt) who originally gave me an inkling that editors were more than grammar-checking gatekeepers to published society. I had previously thought of editors are being people who either made sure that other people’s writing were up to a certain standard, demanding changes to fit a particular demographic as content curators. It didn’t seem like a service I would ever use. However, I came to understand that the right editor could be a content strategist and conversational thinking partner, helping me shape my words—and by extension sharpen my thinking—to create better work, together. That idea I found very appealing, and last year I started asking editors if they’d be interested in working with me to “figure out how editing could work for me”.

There are a few possibilities for editing collaboration, ranging from copy editing to content strategy. In my conversations with Britt, I came to see professional editing in the same light as professional graphic design, as they are both artful forms of communication. Copy Editing is like producing a clean graphics layout, with words that read smoothly and clearly in their conveyance of ideas. Content Strategy by comparison is concerned with the achievement of larger goals through the deployment of words in the world, each campaign designed to elicit a desired response from a targeted segment of the population. After a few conversations with Britt, I was interested in trying some limited-scope projects based on my past writings. I was very curious how an editor of the strategic type (which Britt is) would work me through the process as a professional co-creator. We have no expectations of how it will turn out, but I am totally game to see what happens. This is how we learn new things!

After agreeing on this approach, Britt took some time to look through some of my series-style writing, seeing what caught her attention. The first possibility was a distillation of Themed Work Weeks into a stronger piece, which I had actually forgotten about. Britt felt it was an example of the kind of thing I do well, digging into a messy process and thrashing around, reporting my perceived successes and failures as I try to do my work. I wasn’t really keen on it, but I couldn’t quite visualize the outcome either, so we agreed that it would be something to try. It’s been great to be able to talk about this kind of work with someone who thinks in terms of how one’s work can be beneficial to other people in a strategic—rather than merely wishful—manner. You need an editor who is willing to dive into your work to have meaningful conversations that uncover the truths behind a venture. We’re still in that early phase of discovering what those truths are regarding my motivations; this “themed work week” project is the prototype.

So what is this prototype? It will be, we think, some kind of “how to” or “process document” or…ok, actually I don’t think we will know until the writing has been explored. Britt went through the themed week articles and extracted portions of it that she thought would be a good basis to build on, and put it up on Google Docs so I could look att it and take a pass. It’s a bit weird to see one’s own writing in that context, reconstituted into a new possible work. I spent a couple of hours at Starbucks today, staring at it and trying to figure out what to do. What was my reaction? What did Britt expect? Who was this for? What seemed like the right direction? After about 30 minutes, I made a few notes about what I’d like to see in a piece about this subject and why, and then spent another 90 minutes restructuring the opening paragraphs. I’m not exactly sure what I’m doing still, so I’ll schedule an appointment with Britt and get her sense of it. The guiding principle is that we are making something together; it’s not just me asking someone to help clean up my writing. I’m looking forward to seeing Britt’s reaction to see what comes to her mind. I feel very vulnerable in the process, as I’m used to working solo these days, but I remind myself that vulnerability is part of personal growth.

Today’s tasks were in support of GHDR Goal “The Creative Business”, as the result of distilling the old Themed Work Week posts into something new is possibly some kind of ebook.

So that’s 8 points. It feels like it should be more, because many aspects of this process is SO new to me and uncertain. I’m thinking that there should be a 5-point award for You did work that will refine the bonds of collaboration with someone else; I will add that to next month’s revision of the Groundhog Day Resolutions Tracker.

So that was the day! It doesn’t feel like it was a BIG BOOM of an accomplishment day, but it strangely feels like enough. I did get a lot of thinking done with my new favorite writing app Quiver, so perhaps that is contributing to my sense of well-being. I am getting antsy, however, at all the preparation work I’ve been doing for the past two weeks. I haven’t yet actually expressed anything new for my 2024 goals, and I think I’m kind of scared of doing it. Here’s the list of SCARY THINGS that I know I need to do:

I’d like to hit ONE of those targets thiscoming week. It’s going to be a busy week too, with some major social interactions scheduled on top of kickstarting the next contract I have with the educational software development. I’m not quite sure how I’ll structure my time; I may have to break out the ETP for this week and adhere to a stricter waking schedule. In fact, I’m pretty sure that’s what I need to do.