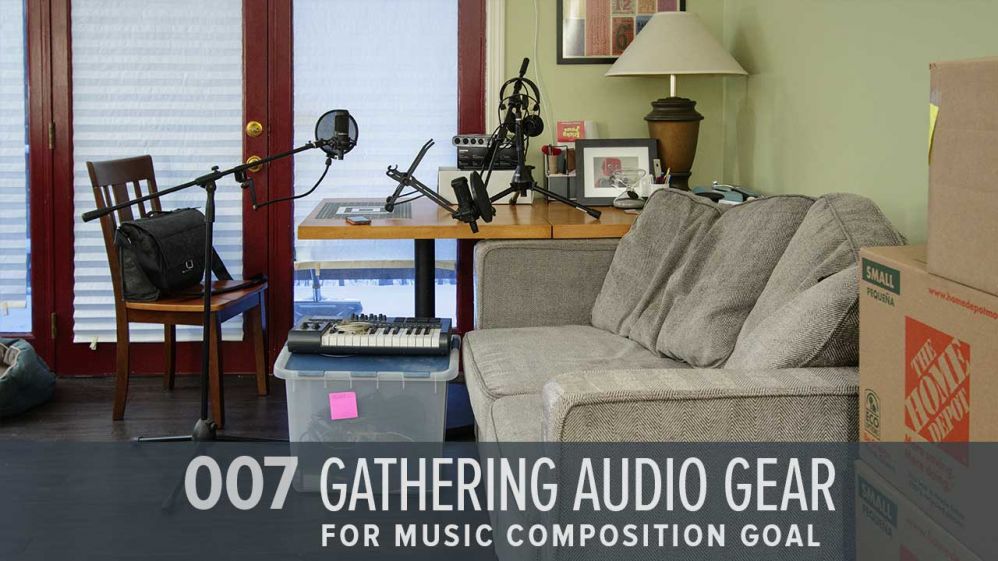 Monday was the first day of putting my fancy new TRACKER into action. I went down to the office at 7AM and printed out an Emergent Task Timer (ETT, not the ETP) to see how that worked out for the day along with my goal tracking; I wasn’t sure if it would be a productive day or not, but I was determined to give it a go. Got a few things done. Getting used to the idea of not trying to finish everything at once…a hard expectation to break myself from. What made it a bit easier was recognizing that the goal I selected, “compose a song”, was going to take a LOT of learning.

One of my 2024 goals is to compose a piece of music. As I don’t play an instrument or have any formal music education, this feels like a real stretch goal. I’d tried taking piano lessons a few years ago, but hit the same rut that I had when I was a little kid: I wanted to know all the “why” behind everything before starting it. Lately I’ve decided that there’s probably no harm in applying an outsider art approach to see what happens. I have a relatively good sense of pitch, have been learning to sing at Piano Karaoke, and have a buttload of digital audio software and recording hardware from other projects. So let’s just see what happens, I say!

Of course, this is easier said than done…how do I start? I figured maybe the first thing to do would be just to gather all the stuff into a pile, which is something I needed to do anyway for recording the podcast I do with my photographer friend Sid now that I’ve moved all the gear back home before his upcoming studio move. The problem was that my recent decluttering had left me with 20 boxes of books to move out of the way, and I’d been too lazy to deal with it.

After making a bunch of excuses and puttering around, which became glaringly obvious as I plotted my hours on the ETT, I shot a “before” video and moved the boxes. Then I went and got all the microphones and gear from the basement, and did a test arrangement. This took about an hour and fifteen minutes, and none of it is hooked up yet, but I’m calling this a 10-point result under the “it helps me get to the next goal” categorization. I’m also awarding myself some points for “overcoming resistance” and “reducing the scope of work to get something done”. That’s like 15 points! Woo hoo! Not a bad day after all!

Unfortunately, I didn’t do any billable work today, and I think finding the balance between goals work and paying work will be a challenge. Perhaps I need to do an hour or two of billable work first, and save the goals work for the evening.

I used the Emergent Task Timer for time tracking today, using the 2013 variation that I was going to make as the next product on Amazon. I didn’t put it into production because I wasn’t 100% sure on the design, so this was a good chance to review it. 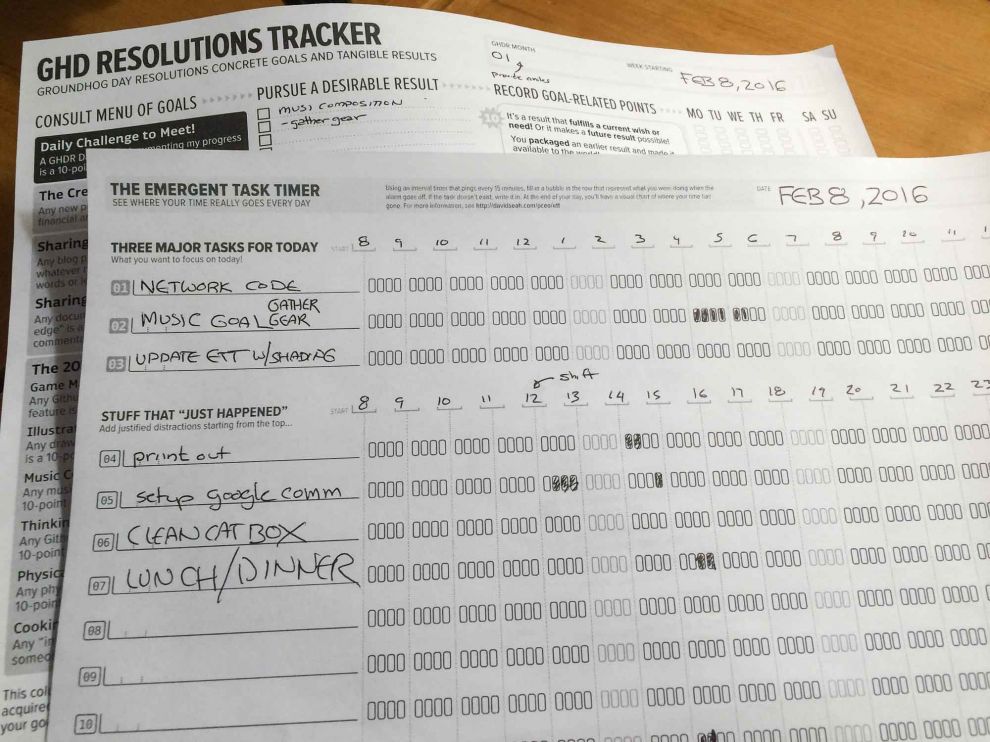 I had inadvertently printed the very first prototype, and quickly ran into some problems with the positioning of the hour markers and the difficulty in comparing columns of time. So I made an updated 2016 variation that I may put into production this year once I’m able to do a printed color proof…I really need to fix my printer or get a refurb one exchanged! Anyway, here’s the changes made: 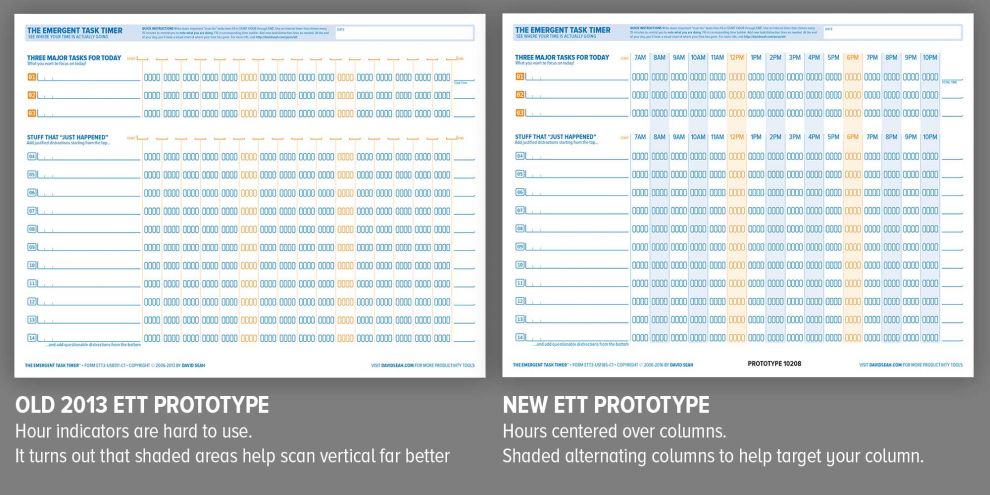 After I give this version a go I may release it to the ETT page, then get a print run priced by my commercial printer, Papergraphics. Before that I probably need to re-release the full-size ETP pads, which have been out-of-stock on Amazon for a while because they weren’t selling. And then there’s the full-size notebook design! So many things to do…but I have to remember that I can do them one at a time.

I also set up the informal GHDR Review Group Community on Google Plus and sent out invites to those who had expressed interest, so this is now in place! So far there’s no activity on it, but at least it’s there. 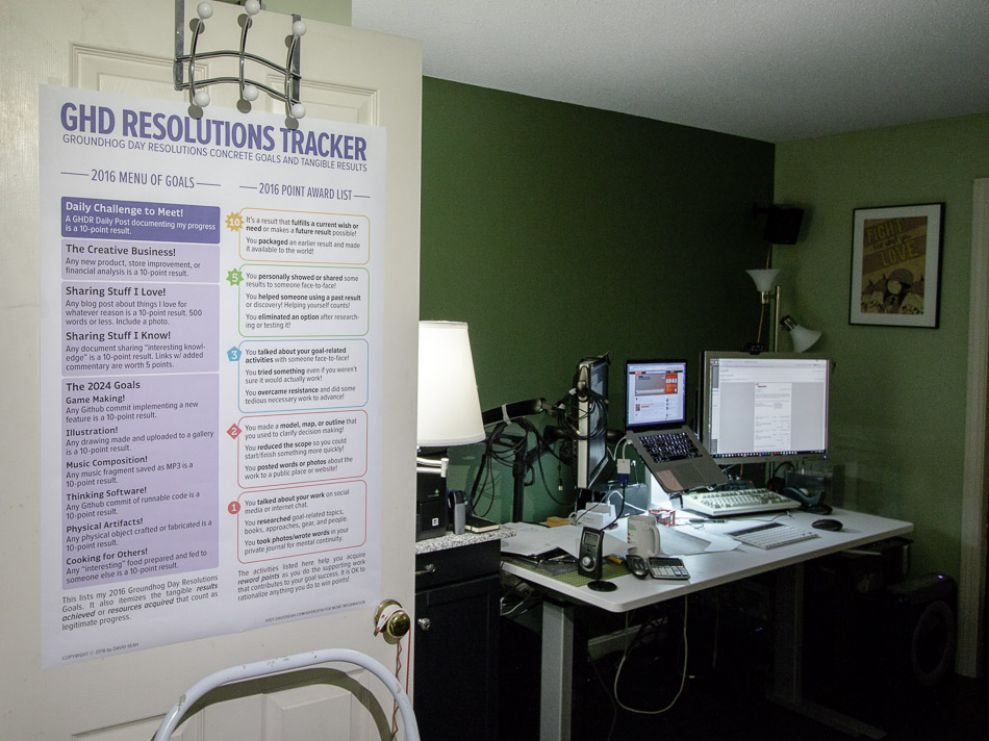 I was excited to learn that my color engineering print from Staples was ready for pickup a day earlier than I thought it would be, so I drove out in the snow to pick it up. The cost for a 24×36-inch print on 20lb paper was US$5.89, which was very cheap compared what FedEx Office wanted if they could even do it (it was an underwhelming retail experience). I also got a smaller 18×24-inch print for US$1.89, and it looks great too. These engineering prints aren’t great for photography, but they reproduce business graphics-type documents quite well. I’m going to have to do a lot more of these!

As first days go, this wasn’t bad! I did spend a lot of time in the morning puttering around with email, blog tweaks, and doing dumb things like adjusting the mail filters so they got rid of more newsletters. If I can spend tomorrow morning focused on some programming billable work, I think I would feel pretty good about that.

One question I have is whether posting these daily updates is too much for readers of the website; maybe I should tuck them away somewhere else. Or maybe I should post my daily reports in the informal group (which is private, though) and post only the results on the blog. If anyone has any thoughts on this, I’m curious to hear them! I’m leaning toward just continuing to write what I normally would do, though this flies in the face of accepted digital media wisdom. A more popular approach would be to write short articles with a free download or short takeaway. The long-form, non-topical manner in which I write is not optimal for gaining a lot of links or downloads, but that’s not what I am really looking for. However, there is also something to be said for not wasting readers time, but I also don’t want to shortchange my own process…

Anyway, it’s almost midnight! Gonna hit the sack and try to get an early start tomorrow!