The Emergent Task Timer: Revised for 2013 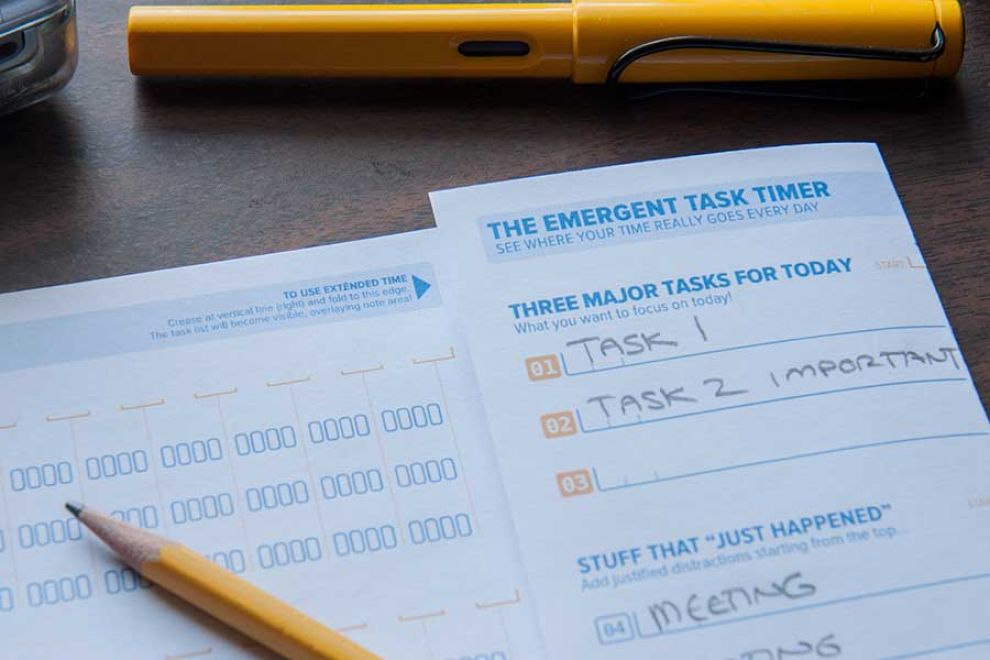 I’ve been tracking my time to see if my “feeling unproductive” was supported by data; as I wrote in the Assessment section of last week’s Groundhog Day Resolutions Review, it seemed possible that I was over-emphasizing the number of negative moments and creating a false sense of slackness.

I’ve been using the Emergent Task Timer (ETT). This is the older cousin of the Emergent Task Planner (ETP), and it was originally created so I could see where my time actually went in the foggy early days of my productivity journey. After a few days of using the ETT again I was surprised to find it wasn’t as easy-to-use as I remembered, so I’ve made an enhanced version to match my current design thinking.

Introduction to the Emergent Task Timer

The ETT is a stack of “task tracks” containing 15-minute bubbles of continuous time. Each track represents a distinct activity. Although there are multiple tracks, we can only focus on one task at a time. By using an interval alarm that chimes every 15 minutes, we note which activity gets the bubble. For example, when the alarm goes off at 3:15PM, I fill in only one bubble in the entire stack of tasks: the one that corresponds to 3:15PM, which is the first bubble in the group of four between 3PM and 4PM.

When I start the day, I list what I am supposed to do at the very top, and start my interval alarm. If I catch myself doing something that isn’t on the list—say, I catch myself surfing the Internet for examples of outdoor clay oven cooking—I add that item to the bottom of the list and fill-in the bubble. Over the day, the “distracting activities” start piling-up at the bottom if I’m particularly unfocused.

When I am really focused, I’ll have solid lines of bubbles at the top of the form. They’re easily counted for the daily total. However, when I am sidetracked a lot, my bubbles get scattered around lower parts of the form. The great thing is that you don’t have to add up any stupid numbers at the end of the day, and you’ll see the pattern of your time emerge as you are working. After a couple of weeks, you’ll have the data you need to figure out what needs to change, and you can show your manager what the hell is really going on.

The old design is perfectly adequate, but I had the following issues (see image below, left side):

Here’s what’s new. The image below shows the new form on the right side.

Here’s some pictures showing the filled out forms. 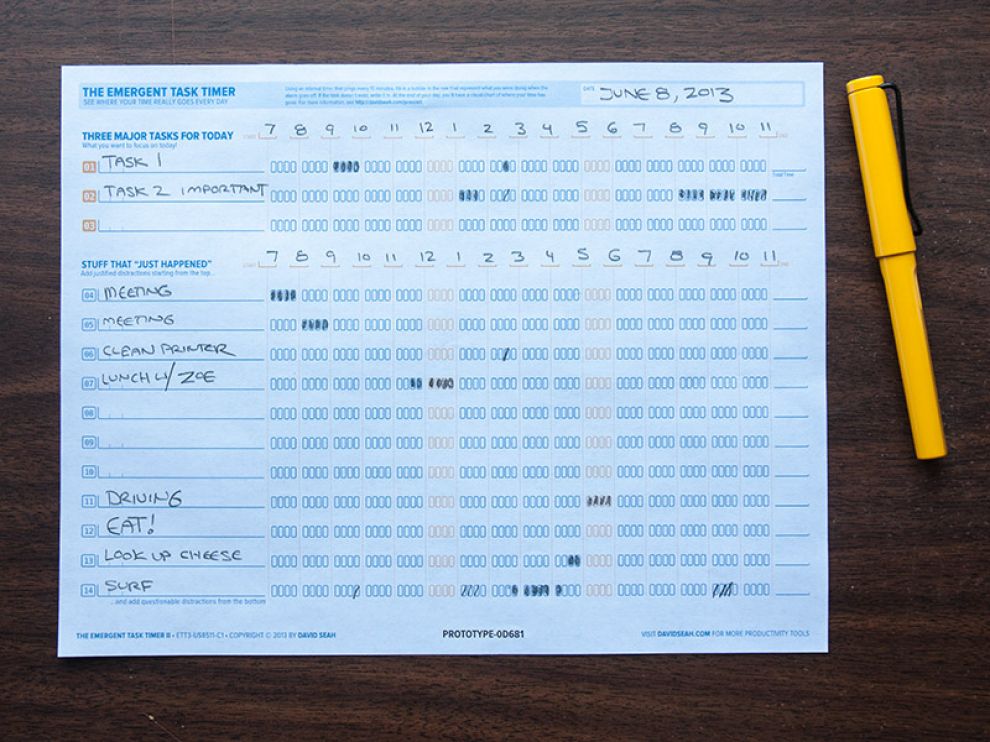 The front side has 16 hours, and the back side has 8 more. There have been times when I’ve needed some extra bubbles due to starting late in the day. Instead of getting another sheet and rewriting my task list, I can now fold over the task list from the front and not have to re-write anything!

The back, when it’s not folded-over, looks like this: 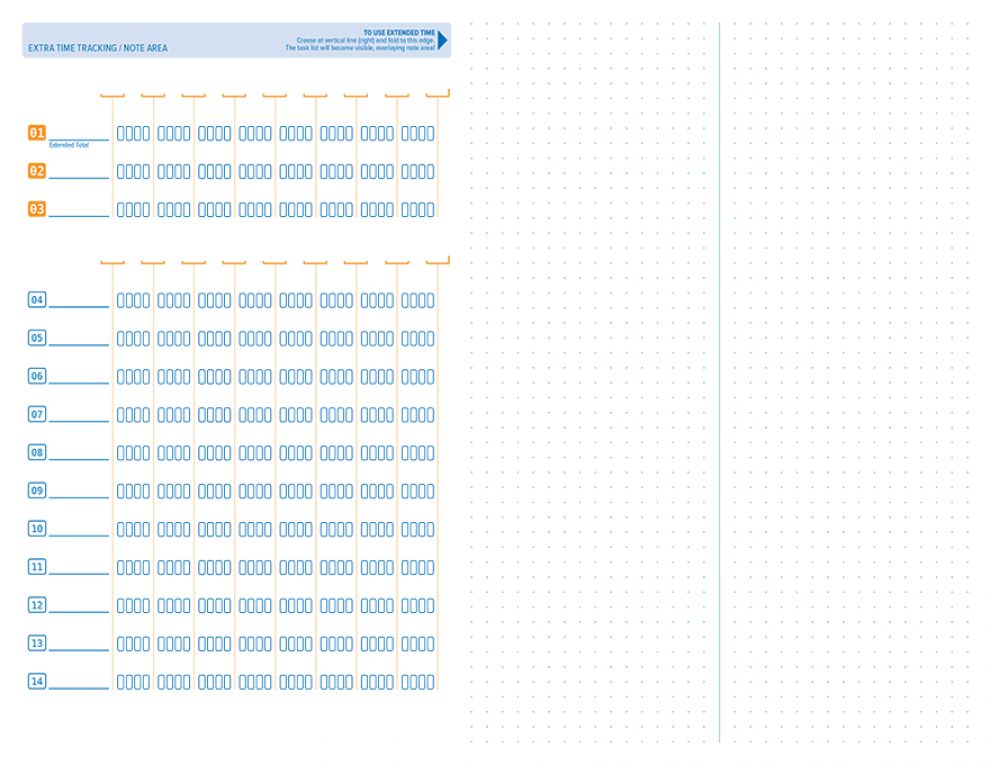 You’ll see there’s a note area that incorporates the folding guide, splitting it into two columns. I think this works better as a dedicated note-taking area for phone numbers. The use of space on the front side is now completely devoted to capturing context around each task.

As I mentioned before, I think the Task Timer is good for situations when you are diagnosing where your time goes. I also find it useful when I don’t feel like planning with the Task Planner. With these new changes, though, you can still emphasize what you’d like to do and see what you spent your time on. You could probably make the argument that the ETT is for slacker productivity and the ETP is for planned productivity, and I would believe you. I’ll be using the new form this coming week and see how it works out.

Here are the available design candidates. They are all 2-page, 8.5″ x 11″ LANDSCAPE PDFs.

I’m thinking that this double-sided version will be the next printed product. If you have some time to express your opinion, I just set up a product survey where you can express your desires regarding the ideal format for you.

Once the finalized version is done, rest assured that I’ll make full package will contain A4 and B&W-optimized versions for download in addition to the physical printed version.