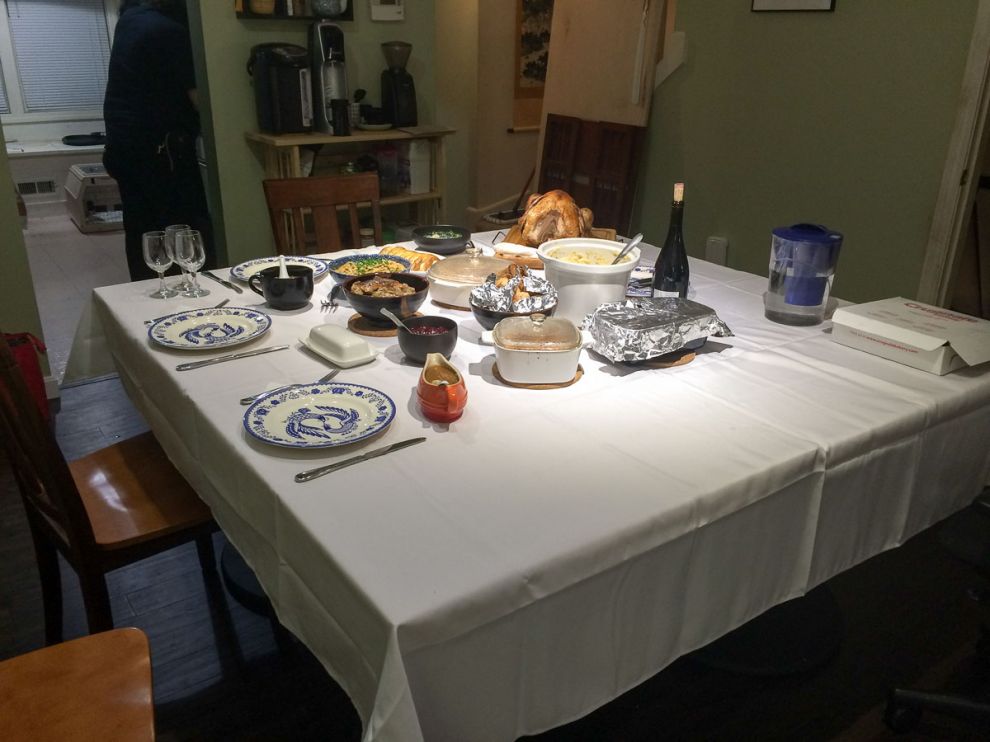 This year’s Thanksgiving snuck-up fast on my sister and I, but we got it done. Of note was the first test of megatable (all four of my new 32×32″ cafe tables pushed together). This is the table that will comfortable sit 8 people with a ton of food, and I see it coming handy in the future for a Chinese-style banquet. I’m planning on making a 30″ lazy susan by going to the nearby restaurant supply store and purchasing a round table top for the rotating bearing base I bought years ago from Lee Valley Tools (a great catalog, by the way).

I also made a new kind of dinner planning spreadsheet which runs time vertically rather than horizontally as I had in the past. This is much more compact, and is designed to help me visualize cooking times and oven resources. We had planned on having dinner at 7PM, so turkey cooking time established when things should happen. I’ve gotten a lot better at making a turkey dinner since my sophomore year in college; by the time everything was ready, it was midnight and we ended up eating a turkey so dry it had turned into actual jerky! This year we made enough food for 20 people for the three of us, and we ate on time. Progress! I was particularly pleased with the way the turkey itself came out, not overcooked at all and very moist without even resorting to brine. The secret was preparing the stuffed turkey upside down for an hour at 325F, flipping it and cooking it for another hour uncovered, then covered for the remaining 2 hours at 250F until the internal stuffing temperature reached 155F and the outside lower breast reached 160F. While these temperatures may seem a bit low compared to the official USDA recommended temperature of 165F, some have argued that this temperature is merely a point on a curve of acceptable time/temperature pairings; 165 degrees is the temperature at which food pathogens in poultry are killed in a few seconds. Lower temperatures take longer, but apparently still do the job. There are various tables and debatable points within the modernist cuisine and food safety circles that are worth reading if you care about juicier meat preparation.