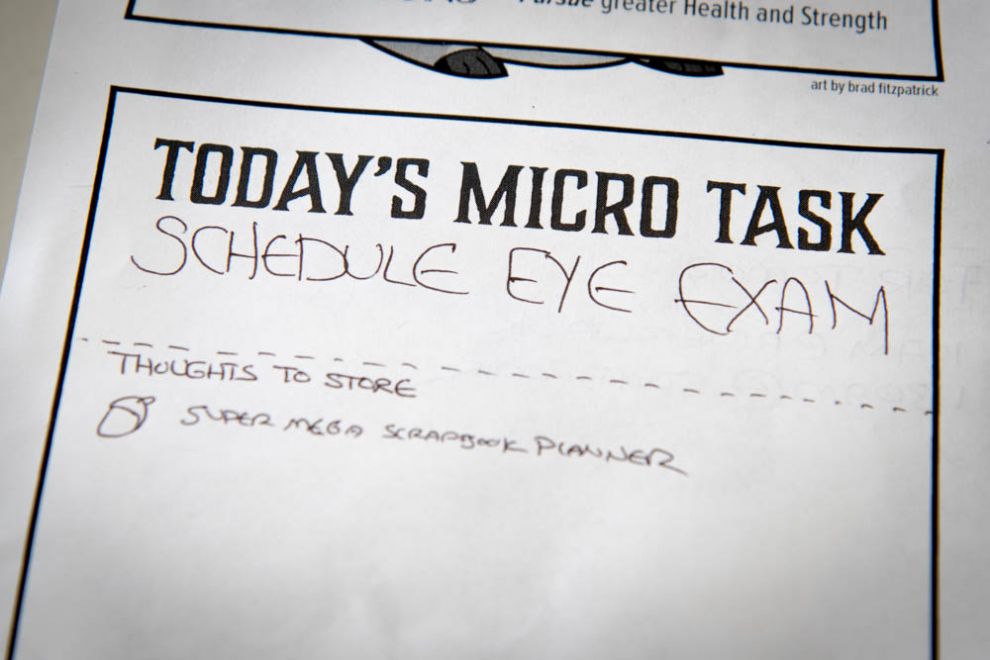 Today’s MicroTask comes at the end of a lazy morning. After processing several thoughts related to procrastination, I finally picked something: schedule an eye exam. I have been putting this off for…sheesh, three years?!? Has it been that long? Do I hate using the phone that much? This fits with the pursue greater health and strength goal for the year. Heck, tomorrow I might even go to the gym!

Ha ha ha! But seriously, maybe I will. Micro tasks are about making SMALL bits of progress, incomplete and seemingly insignificant in themselves, but building toward a payoff in the annoyingly-distant future. It feels like having a single ant for breakfast, if I were an aardvark.

More thoughts about how I’ve been feeling about goals, particularly being trapped by them, are after the jump.

I woke up very late, not wanting to do anything, though I had some interesting thoughts in the shower:

One of the lessons I’ve been slowly learning, even now at the ripe old age of 47, is that living to other people’s expectations full time is a terrible way to live one’s life. Sure, there are responsibilities and commitments we make to our family and peers that demand a measure of selflessness, but that’s not what I’m talking about. I’m saying that there has to be some measure of mindful decisions that I make that are based around myself as the metric, now that I know myself better than I did in my 20s and 30s. Those aspects of my personality that I am trying to build—being predictably productive, always ready, able to deploy all my strengths on a moment’s notice, cheerily putting in work without complaint or discontent—really are difficult for me. I often think that I’m like the grasshopper in that fable, more content to play in the summer than put in the hard work to survive the winter. I think about this fable a lot.

Yesterday, I made a section in my Micro Task sheet for saving the distracting ideas that popped into my head. I didn’t feel I could work on any of them because of the “long term goals” and “responsible chorekeeping” that I have on my list of “life enhancing tasks”:

By writing these down, I hoped to pickle them so they were out of my head. It helps. But at the same time I’m feeling like I am squashing myself because I also want to complete the big tasks.

So that’s the essential conflict: give in to whimsical impulses to research and create, or hunker down and walk the difficult and uncertain path that will yield greater payoffs in the long run. Perhaps I have to alternate between these modes for my own sense of balance, spending two weeks in heavy project focus mode, then two weeks in whimsy exploration mode.

UPDATE: Here’s the sheet at the end of the day. 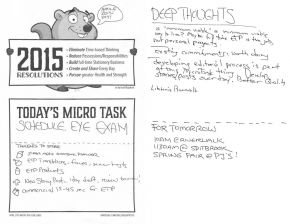