2014 Resolutions Review 04: Trudging through the Blahs

Finally, it is no longer freezing outside here in New Hampshire! Once again, it is time to review my year’s goals as part of Groundhog Day Resolutions!

To recap, this year’s goals were chosen to create more “forward momentum: in both my personal projects and personal relationships:

I’ve actually been taking it easy this month, after last month’s more intense work cycle with ongoing client work. I’m feeling somewhat recovered, but have been finding it difficult to make the progress I’ve wanted. I’m a little sick of all the tracking, frankly, so I’ve been experimenting with other forms of motivation.

The Work in Review

The beginning of May was a key deliverable for the UCLA project, involving kids and researchers using the system for the first time with all the technology and software. I wasn’t on-site, but there was a bit of last-minute fixing to do. After that, everyone went on vacation for a couple of weeks, and I’d hoped to catch up on other projects. Unfortunately, I’m a bit tired of hammering away slowly at the work, and I’ve been playing video games as a cheap vacation to a virtual world. The nice thing about a game like WildStar is that there’s a very clear path of progression AND there’s a lot of artwork to see. I also have a professional interest in current realtime graphics game environments, so it’s a deductible expense. I’m not sure it’s such a good idea in the long run to be sucked into one of these games, but I’ve been enjoying pretending I am a blue cat slingin’ spells at monsters in a gorgeously-realized 3D environment while listening-in on the geek talk on the role playing channels for a double-dose of full-on nerd action. The real world has been depressingly about cleaning up the house, code refactoring, and fulfilling promises for non-profits for free. I am feeling drained by the number of requests, many of them quite significant time sinks, and need to act to reduce them drastically or ensure they happen face-to-face, not remotely. There is nothing quite as unfulfilling, in my book, as being stuck at home working on someone else’s project for free as a cog in their machine without getting to talk to them in-person.

To keep moving, I’ve shifted into experiment mode, which means that I’m doing more self-analysis. Recent blog posts have documented my ongoing exploration of ADHD Inattentive Type as part of the Fogbrain Series, managing my documents, and observing the ratio between time spent producing versus consuming. It’s been a tough slough. My hope is that something will shake loose soon and I’ll be back in a more productive frame of mind. At the moment, I suspect it’s really just the number of projects that are moving slowly combined with the number of promises that I’m trying to keep to be a good citizen in my community. I am finding it very draining at the moment.

That’s about it for work-related stuff.

The Sharing in Review 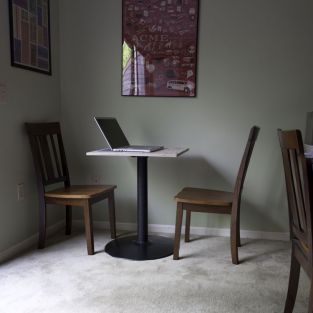 On a brighter note, work on my living room cafe has been moving forward. I hired a friend of mine to help me clean the entire house and do some clutter busting. The old furniture has been taken away, leaving the living room and the basement clear for modification. I got a quote for having a local well-regarded flooring company do the work (around $3000 for materials + installation), which I think is doable in a few months. I set up my test cafe table in the corner (picture right) and it’s pretty awesome. I think this is going to work, and I am really excited about having a nice space where I can invite my friends to hang out and work on projects and eat delicious food.

The Marketing/Website in Review

Other than work, there’s also the personal website, which I’d hoped to have launched by now. I started making one of the needed changes to the new Productivity Tools page, then discovered that the theme I bought implements the “portfolio” post type in a way that is not very useful to me; I will have to either dump it entirely or rewrite part of the code. That took four hours to figure out one day, and it’s left such a sour taste in my mind that I haven’t gone back to it.

I’ve been feeling very tired, though it’s more of a mental weariness than a physical one. I feel like I need a change of pace. I had the thought that there are two areas of interest that I have which I’ve never seriously pursued, because I thought they were too hard and became frustrated. And yet, they are areas that I really actually do love: illustration and music composition. I love illustration, but find it difficult to draw well. Likewise, to compose music I need to be able to play an instrument. It’s kind of weird how much these two fields really hit me deeply, but I’ve never actually made them into a serious pursuit. Instead I’ve played it safe by using the computer as a kind of creative crutch.

Of the two, I’m thinking music might be the one to pursue, as it’s more different from my usual work than illustration. I sense that there is an untapped kind of vulnerability and expression that would be of benefit to me, as it is very “in the moment”. Also, learning to practice something for 15 minutes a day would be a good habit to develop. Maybe singing? That scares me, so it probably is a good thing to look into. Upon reflection, I actually do know a lot of very friendly and competent musicians now thanks to the community connections I’ve made over the past few years, and now I have a clearer picture of the experimental and playful nature of music making. I could learn a lot from that!

Anyway, here’s the plan for the coming month:

That’s all for now. Thanks for reading!

Here are other posts about Groundhog Day Resolutions for the 2014 season.