This month’s challenge is to be mindful of the time I spend producing versus consuming. I’ve started to collect the daily activity on the June 2014 Challenge page.

Rather than work on forms today, I actually ended up cooking something from scratch on my charcoal oven: hamburgers!!! 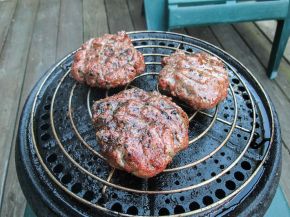 Last week I had bought some fancy hamburger patties that had all this extra “gourmet” stuff in them. I found them to be overly salty, with a texture reminiscent of sausage because the meat had been over-mixed. I mentioned this to a friend of mine, who commented that he likes to just add a little salt to his ground beef and it cooks up just fine.

So, I bought some hamburger meat, added some salt and a a little bit of panko (flaky Japanese bread crumbs), and very loosely mixed it together. I wanted to retain that kind of “crumbly” texture in the meat, so I was careful about not overmixing it to smoothness. Then, I heated up my Cobb-brand charcoal oven and cooked them up for about 20 minutes with a bit of mesquite for smokiness, which brought them up to around 170 degrees F according to my thermopen; I wasn’t going for a very rare burger this time, as the ground meat was maybe a little on the old side.

The result? A far superior burger, for less money, without a lot of fancy ingredients. An honest hamburger! I was pleased.

Total elapsed time: maybe an hour of starting up the charcoal briquettes and heating the oven, then about 30 minutes to cook and prepare for eating. It’s been a while since I’ve cooked anything for pleasure, so this was a nice reminder that such options are available to me. I was struck by how something as simple as a hamburger was so easy to screw up, as in the case of the gourmet burgers I’d tried, because the balance of taste and texture in combination with the bun and various condiments is so delicate. The gourmet burgers were edible, perhaps even good in some “enhanced flavor” sort of way, but the lack of total harmony with the other ingredients I had on hand was quite evident. To create a superior burger experience, one must carefully select the flavor profiles to make a purposeful statement of culinary intent.