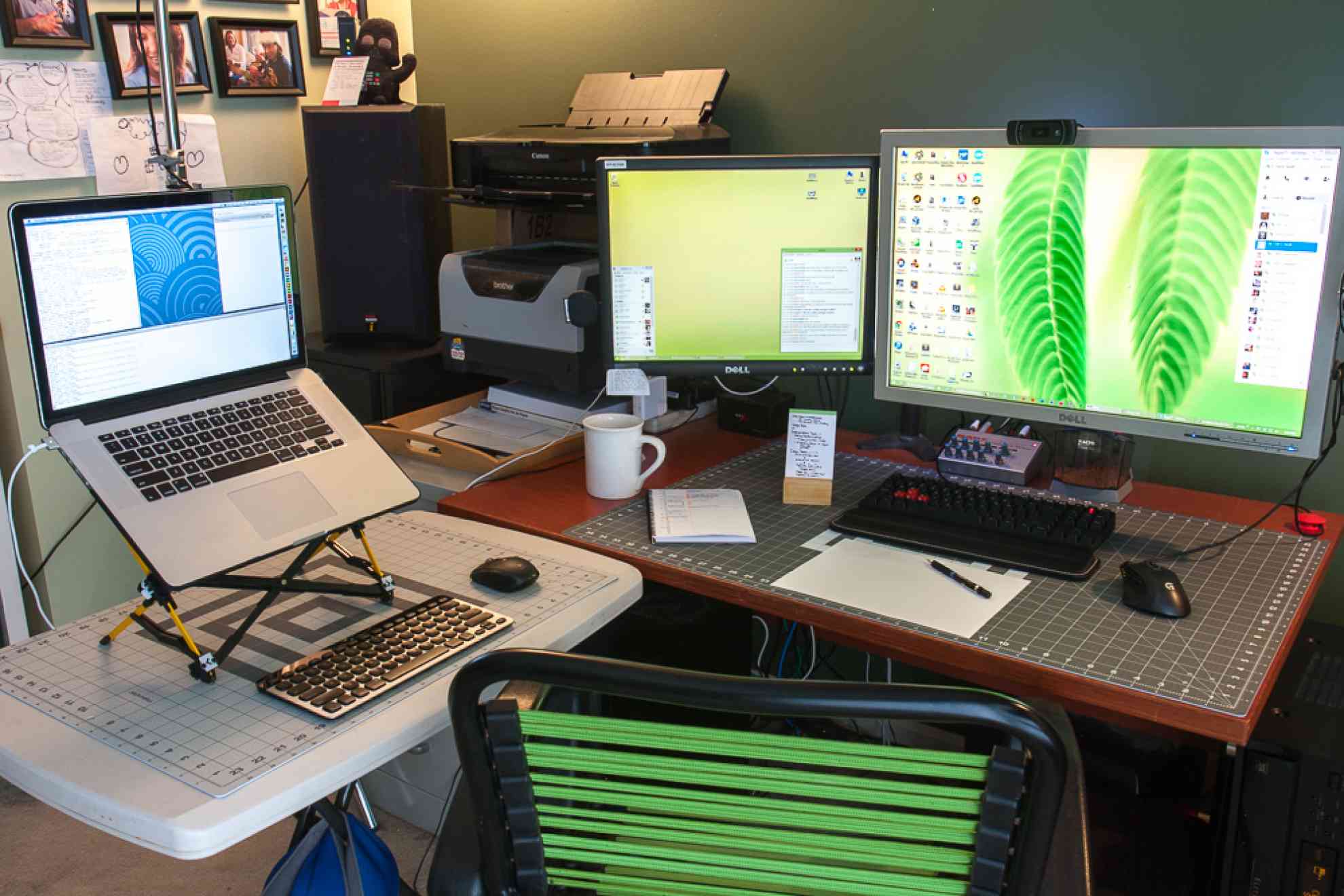 My old office desk was a 48×36 inch surface that I’ve been using since I used to have 20″ CRTs. The extra depth (3 feet!) was important to get enough work space. After switching to LCD and buying some sweet Ergotron monitor arms, I ended up with a HUGE workspace and plenty of space. The desk remained free of clutter because I put up a bookshelf to my right where I keep all the junk that USED to be on the desk, and made sure to keep it clear. The cutting mats I got to use as a giant mouse pad, and are printed dark/light on either side for when I need to take product photography. So why change? After coming back from GiveCamp 2014, where I spent a lot of time moving around a large space between projects, I suddenly developed an aversion to sitting. It also helped that my green bungie cord chair was starting to fall apart, so sitting in it was becoming rather uncomfortable. 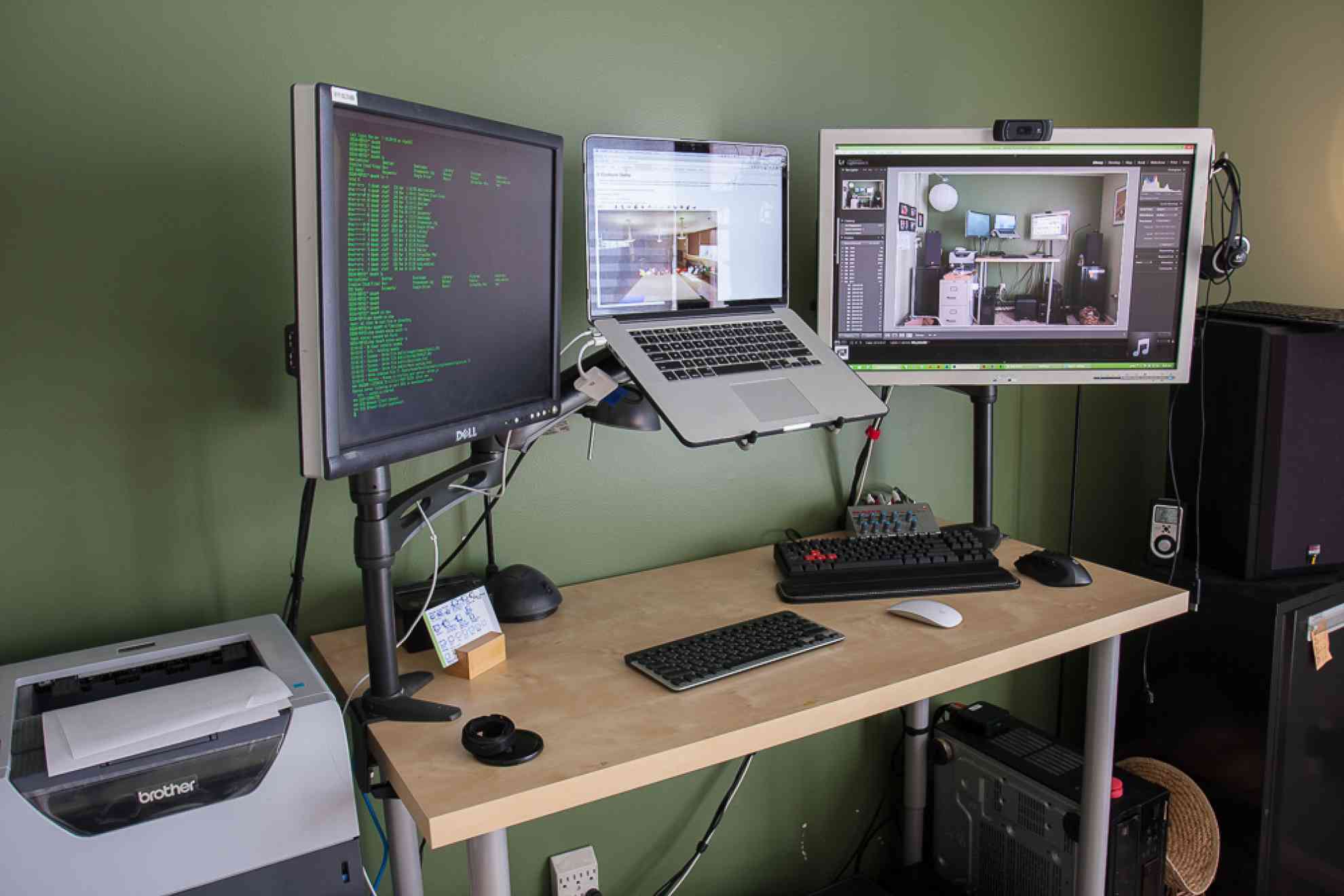 The new/old setup is using a $20 IKEA LINNMON table top on VIKA KAJ adjustable-length table legs; the GERTON legs are the new version. The table top is significantly more shallow (24″ versus 36″), but the desk space is all usable because of the monitor arms. For the curious, here’s what’s visible in the picture:

One issue I had is that all my crap is exposed under the table, so I bought a cheap pull-down roller blind at Home Depot, had it cut to width, and then mounted it on the underside of the desk. If it ever unwrinkles, I’m going to try painting it the same color as the wall behind it. It is a marginal improvement. 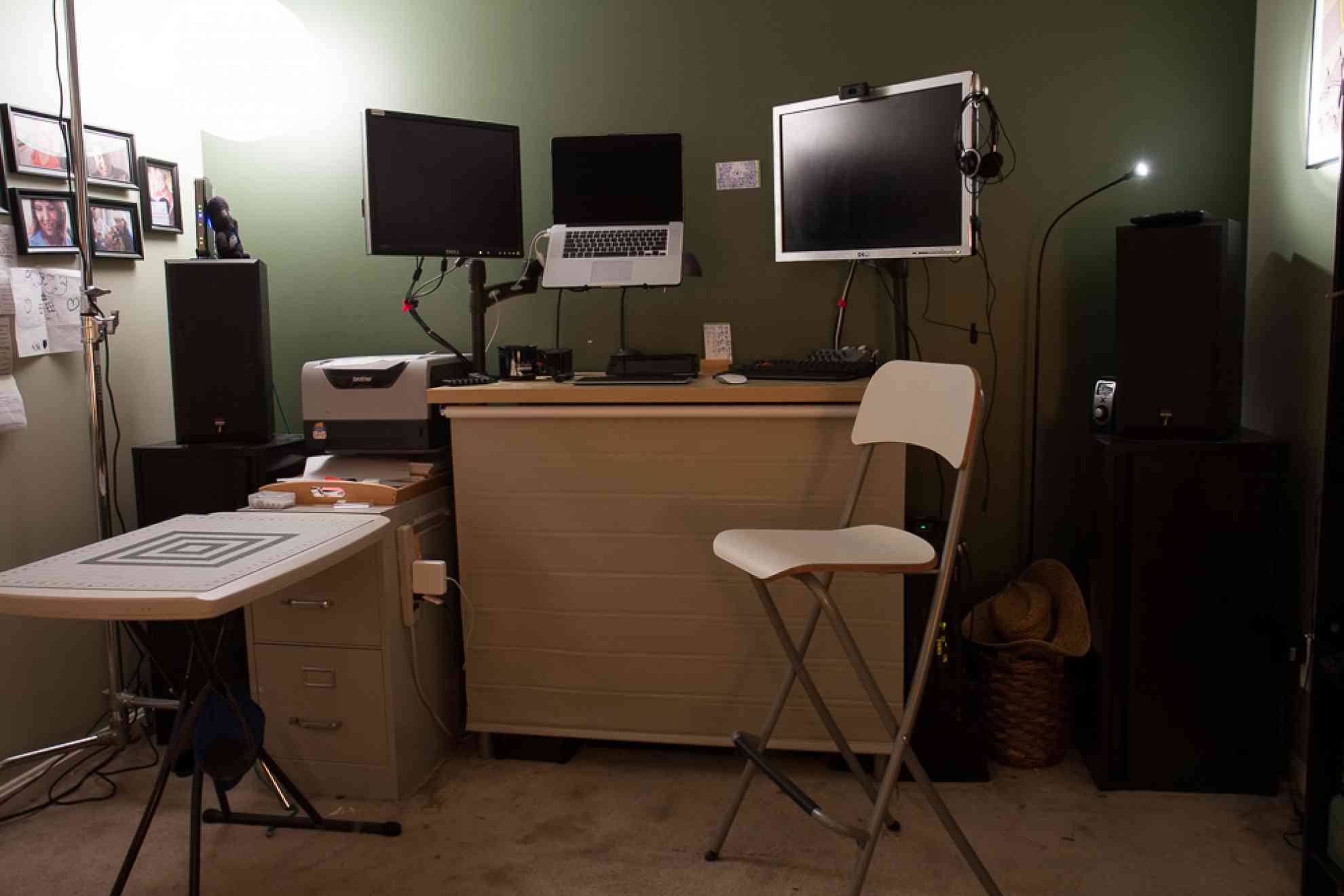 This table will be replaced by a new motorized standing desk from Steven Yu’s $399 Stand Desk Kickstarter. It’s already fully-funded on Kickstarter with 24 days still to go, so you can still jump in on it if you’re in the market for a desk. I’m thinking of getting this color scheme in white/platinum, though there are other options available: 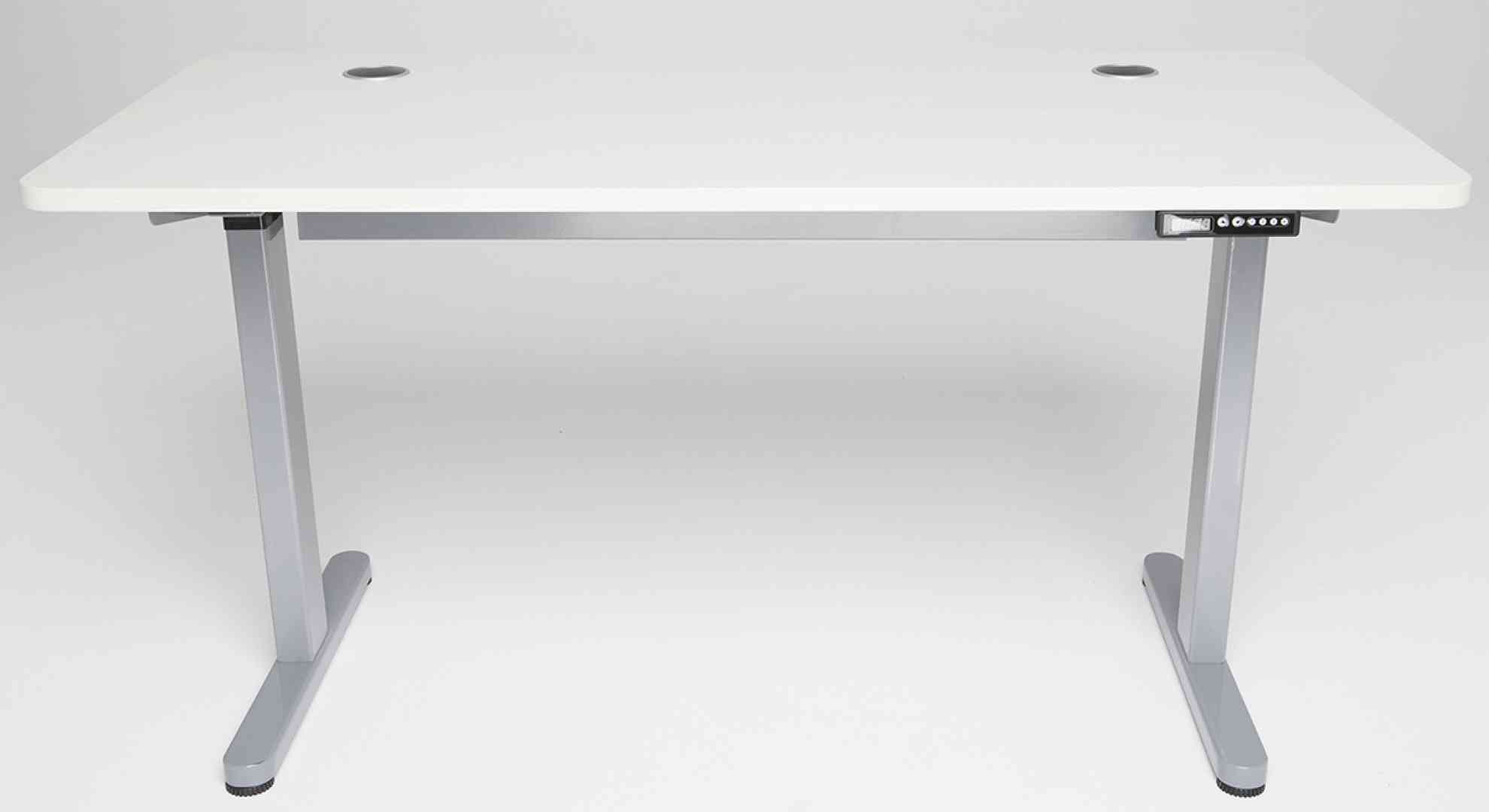 The desks are expected to ship in November 2014, and they look like a solid bit of engineering. I must admit that I’m backing this also from a desire to support Asian American entrepreneurism…hopefully it works out! The other standing desk that I was considering was the Terra from NextDesk, which is highly regarded for its aesthetics and functionality, if not for its $1500 price tag. Personally I don’t like the leg design that much for either desk; the Stand Desk design has an advantage of not having the lower cross brace so it’s a little cleaner in appearance, though I was concerned about its stability without it. I emailed Steven to ask about its stability, and he assured me that it was very very stable without wobbling; their FAQ mentions that they had 16 beta testers who didn’t complain, but the amount of wobble would very depending on application. Hmm. The assembly video give me some clues about the stability of its construction. Here’s a still from the video: 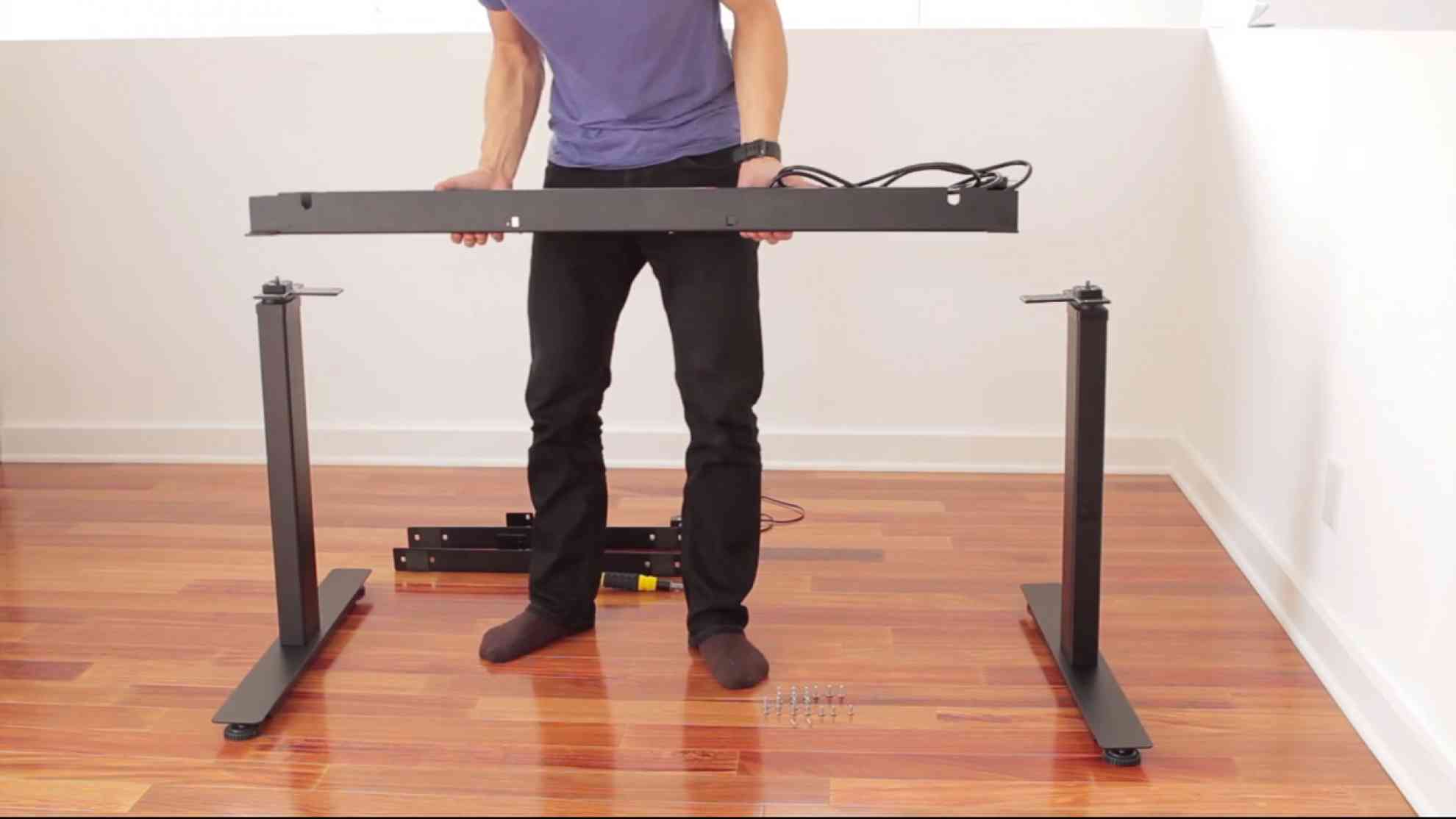 My armchair impression is that it is PROBABLY stable enough from the horizontal flange things locking into the top crossbar, which looks like folded sheet steel so its rigidity should be good. There may be some wobble given the mechanical play that is likely required in the moving legs, but even my new-old Steelcase Leap V1 chair has some wobbly bits (cough armrests), but in practice it’s very stable. My cheap-o standing desk now is actually pretty unstable by itself, so it’s braced against the wall using two rubber feet that hold it in place when I’m leaning slightly against it. As a result, it is supernaturally stable…so long as I am leaning against it to anchor it against the wall, which I do anyway thanks to my bountiful stomach. I won’t have that option with a motorized sit-to-stand desk. The new desk will be 60″ wide by 30″ deep, which is larger than the space I currently have. However, I plan on moving the printer and filing cabinet that it’s sitting on downstairs to a secondary working office. Having the standing desk upstairs actually doesn’t quite work with my floorplan for the living room cafe, as it breaks the concept (and takes up the space for a giant TV), but we shall see! 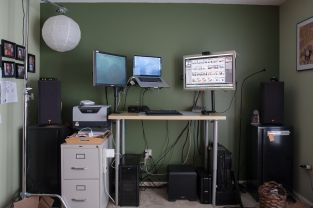 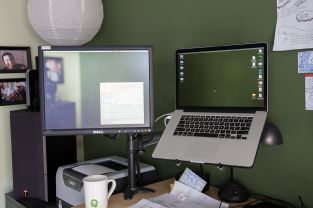 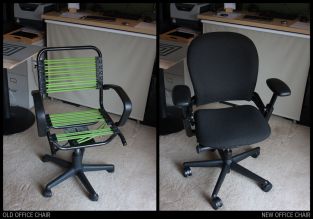