SUMMARY: While the Concrete Goals Tracker, Emergent Task Planner, and Emergent Task Timer PDFs are being updated, the more obscure forms may not get an update unless I hear that someone needs them. The current roster of forms is listed in this blog post.[pceo]:http://davidseah.com/pceo

It’s that time of year again when I do the 2010 updates for the various [Printable CEO™ Printable PDFs][pceo].

If anyone feels strongly about a form, please post a comment to let me know how you’re using it. Otherwise I might drop it from the active roster, or delay updating them. Suggestions for form improvement are also welcome.

So what is in an update? Most of the time it’s merely cosmetic, for example changing the year from “2009” to “2010”. I invariably make a few small tweaks to the fonts and spacing. A major reason for dating these forms is so I do receive feedback from people who are using them; this is always interesting, and helpful in finding opportunities to create new forms.

Here’s the current catalog of forms. The update status is listed with each entry. 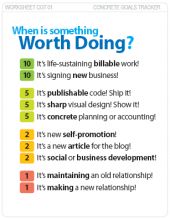 This is a high-level “what’s really worth doing” filter, which uses points to assess the effectiveness of your week. The standard version is customized toward maximizing the growth of a freelance operation, but there are also editable versions for making your own targeted action lists.

Visit the CGT page for more information. The new forms will be available on January 1, 2010. 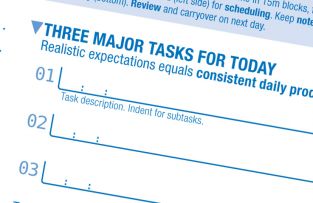 This is a popular on-the-fly daily planner form, designed to give your day just enough structure and focus to get a few things done. This year’s form is based on the pre-printed version, and will come both in US Letter and A4 size. The Day Grid is now back on the left side, where I think it belongs, so all forms have been updated.

You can visit the ETP page for more information. The new forms will be available on January 1, 2010.

This was an experimental form I made to help guide the sales process from networking to closing. I hardly hear of anyone using it, so I probably won’t update it unless someone says something.

You can visit the NCM page for more information. Update status: Uncertain. If you use it, leave me a comment and I will update it. 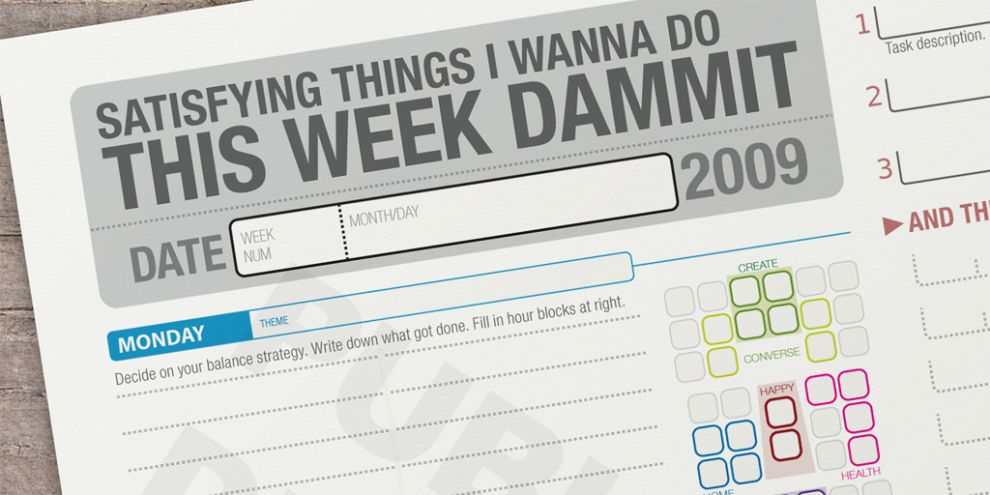 Earlier this year I was thinking about how to ensure a “balanced day”, and the Day Grid Balancer (aka “Satisfying Things I Wanna Do This Week Dammit”) was born. It sort of petered out in the waning months of 2009, but I’m willing to update it if there’s interest.

You can visit the DGB page for more information. Update status: Uncertain. If you use it, leave me a comment and I will update it. 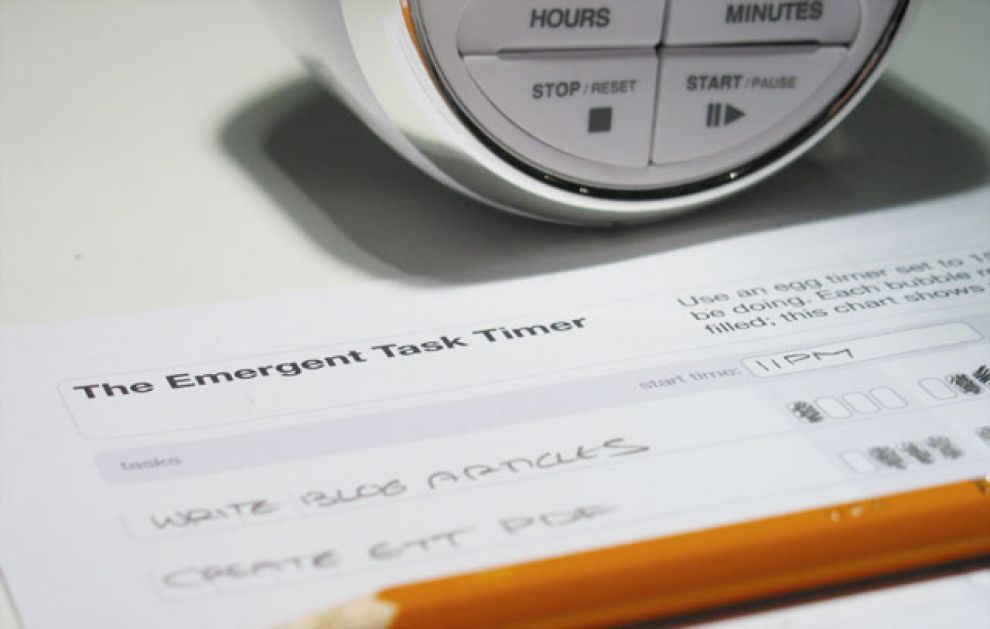 Back when I wondering where all my time was going, I made the Emergent Task Timer. It’s also known as the “bubble timer”. Basically, you set a timer to go off every 15 minutes and write down what you were doing. You can fill in the tasks at the top of the sheet with things you PLAN to do, and write down the stuff you weren’t supposed to be doing at the bottom of the sheet. It is a good diagnostic tool for grad students, and a good “this is where my day went, boss” tool. Some use it to track billable hours. Like all the stuff I make, it’s designed for minimum fuss in data entry, and maximum ease of accounting at the end of the day.

You can visit the ETT page for more information. The new forms will be available on January 1, 2010.

This was a really stripped-down “5-day planner” I made this year in both A4 and US sizes. I haven’t heard of anyone actually using it, beyond me for a couple of weeks.

You can visit the P5P page for more information. Update status: Uncertain. If you use it, leave me a comment and I will update it.

When I was burdened with a bunch of projects, I made a couple of forms designed to overlay on a clipboard that would allow me to estimate project durations in chunks of 1-4 hours, and then allocate that time in the future. This is the sort of thing useful for small web agencies, but in practice I found the use of paper to be cumbersome on an ongoing basis. Every once in a while someone asks me about it, but as far as I know there isn’t anyone relying on it.

You can visit the RTT page for more information. Update status: Uncertain. If you use it, leave me a comment and I will update it.

The Task Order Up! 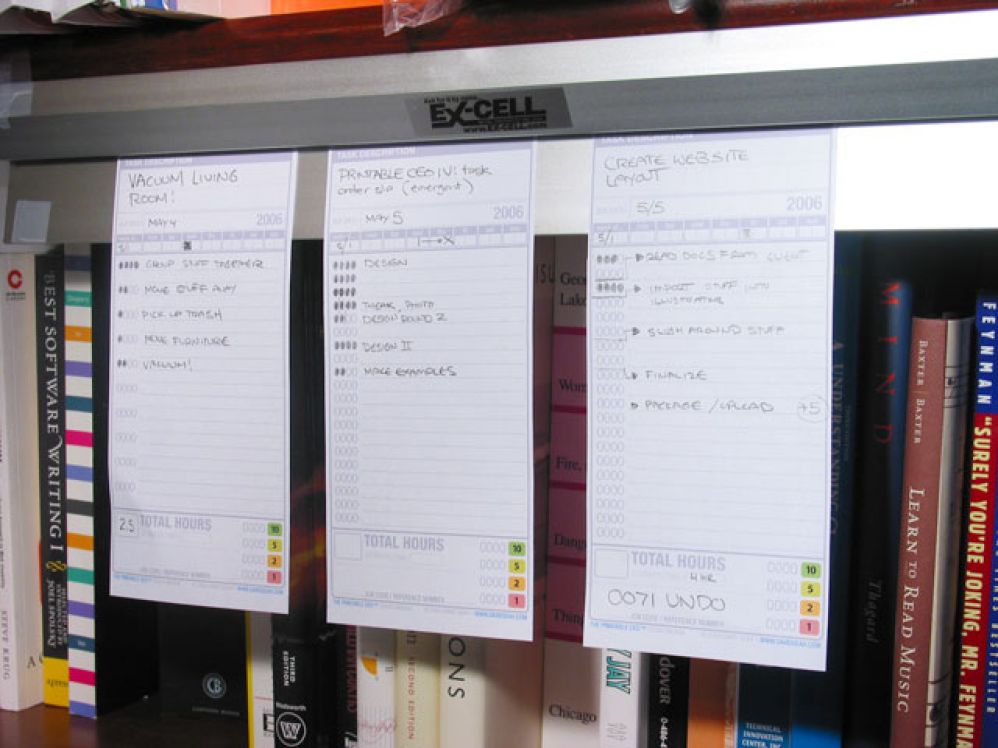 There was a time where I was beset by numerous tasks that each had its own set of deliverables, and I wanted a way of keeping track of them like “order tickets” at a fast food restaurant. I liked how I could visualize and prioritize individual tasks. I’ve heard of people using this system or a variation of it in a production workspace, so people could see what people had going on. I haven’t heard of anyone using these forms recently, so this update is on the backburner.

For more information, visit the TOU page. Update status: Probable, but if you use it, leave me a comment and I will update it sooner rather than later.

This was my answer to To Do lists that took too long to check off. Technically, this is a form that helps one deconstruct the steps of a project, assign estimated times to them, and figure out the overall timeframe of the project. It encourages you to break down tasks into small time chunks, and also serves as a tracking to-do list to measure time spent against a task. I made this back in 2006 when I needed a way of logging progress on a to-do list that didn’t result in completion. I’ve heard of people using the form as part of their engineering production process. It is also somewhat compatible with Agile methodologies in spirit, though I didn’t know anything about Agile when I made it. Of all the forms, this one is in most of a need of a cosmetic update.

For more information, visit the TPT page. Update status: Probable, but if you use it, leave me a comment and I will update it sooner rather than later.