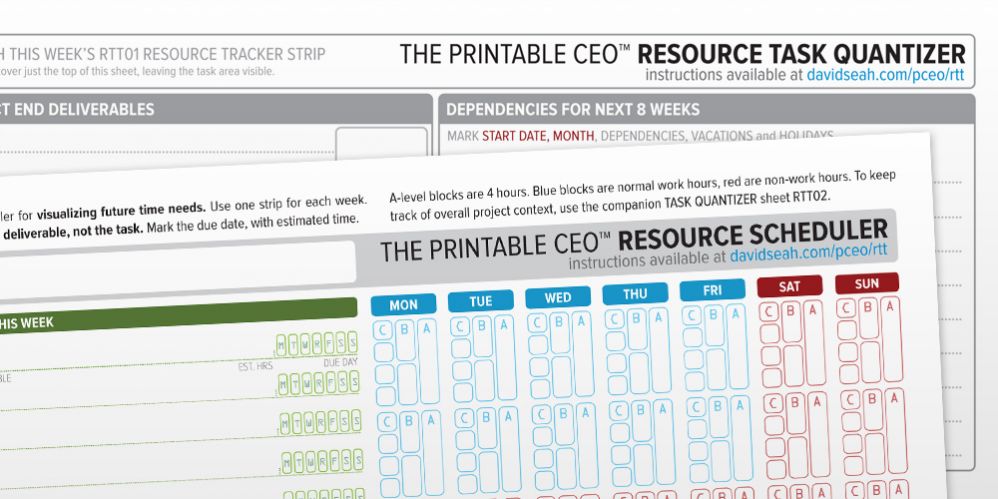 When I used to work at an interactive design studio, we had many people assigned to multiple projects making use of unique skills. Being able to book work based on future availability meant knowing schedules, which were subject to change. We also needed to not overbook people with too much work. The Resource/Time Tracker (RTT) is a pair of forms I designed to help visualize the problem.

If you are a project manager and are already juggling multiple projects, you might find these forms useful for structuring project definitions and upcoming deliverables in a way that you can share with your team. 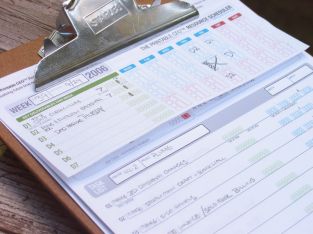 It’s designed for relatively small numbers of projects, as it doesn’t scale well on paper. You might find the ideas useful in developing your own methodology. What I like about the RTT is that it fits on a clipboard, with the smaller form laying on top of the larger form, as shown to the right (click the picture to make it larger):

The basic idea is that you first plan out the project on the Resource Task Quantizer, which is form RTT02, shown left.

The Resource Task Quantizer is split into two halves.

Here’s an example of the form filled out: 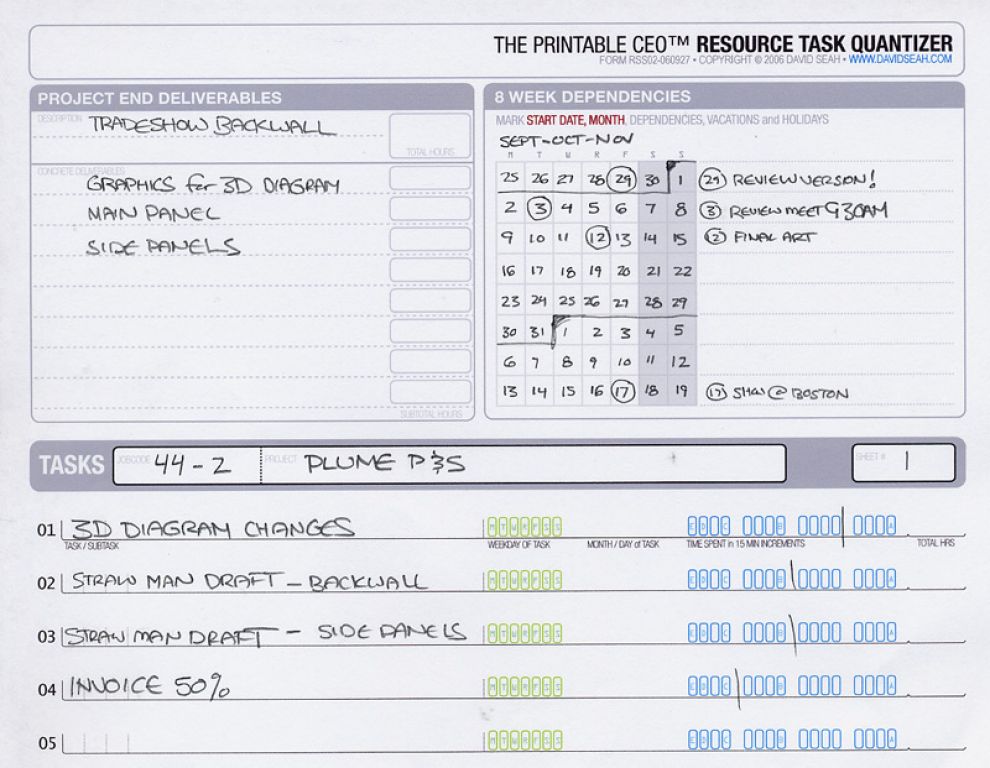 You can use one of these sheets for each project, and stack them on your clipboard. But how do you keep track of all of them? That’s where the Resource Scheduler comes into play.

Step 2: Review All Your Projects with RTT01 Resource Scheduler

The Resource Scheduler is your overview of all projects on a weekly basis. When you print out the form, you’ll see it’s actually three copies of the same form. Cut along the dotted lines to split the form up, and use one fresh form at the start of each week.

The form is designed to neatly overlap the executive summary on the full-sheet Task Quantizer described previously. The Resource Scheduler is split into two parts.

Here’s an example of the form filled out:

The Resource Scheduler handles only 7 deliverables per strip, but you are not limited to using just one strip. It might make sense for you to use one strip per person, or maybe you can use the entire sheet to allocate a person’s time for up to three weeks at a time. This is the point at which I decided the system became too cumbersome for paper, but I’ve heard a few people have adapted the form for their own agency use.

The first version of the RTT was created in September 2006. You will find more background in the original RTT blog post from 2006. Enjoy!

Tip: To download the PDFs to your computer, right-click (control-click on Macs) the links and choose "Save Link As..."

Cut into strips. Assign one strip per person for weekly deliverables.

Each sheet handles a single project.