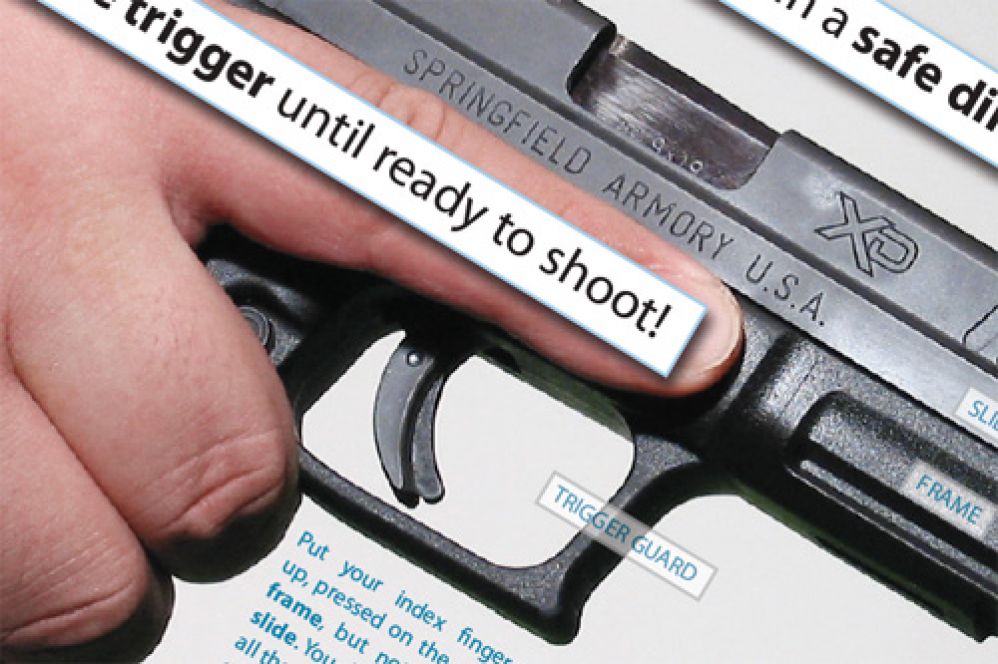 If you’re looking for the PDF, scroll down to the bottom of this post

UPDATE 2015: An updated design is available for a dollar donation!

About a year and a half ago, I was in California for the bachelor party of one of my very best friends. He decided (after consultation from the missus-to-be) against the usual stripper-assisted drunken revelry, and thought that we’d all have a good time bonding instead at the nearby shooting range. After blowing through $200 in ammunition, I was hooked, and resolved to learn more about shooting as soon as I got back to New Hampshire, though the prospect of learning how was rather intimidating. 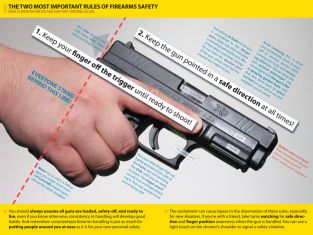 Since then I’ve learned how to operate a handgun, and I’ve been introducing my friends to shooting as well. I recommend taking a certified course, but I find the personal introduction helps people get over their initial misconceptions and fears about firearms, which means they have fun a lot sooner. Knowledge is power! And as it so happens, I’ve been playing around with InDesign CS2, so I created a reference for next time I’m introducing people to shooting. You can download a PDF at the end of this post. After the story.

Shooting is something I am self-conscious about because of my Chinese ethnicity; walking into a gun store filled with scowling white hunters can be an intimidating experience :-) As it turns out, they just scowl at everyone until you become a known quantity-it helps to be polite and serious about conducting business, and once they realize you’re there for the same reason they are things lighten up–but that’s a story for another day. A second barrier: my family background is strongly entrenched in the Church, and didn’t offer guidance regarding firearms that (I suspect) American families with a strong attachment to the “Old West” would have–you know, like Dad grew up playing Cowboys and Indians, or Grandma was a sharpshooter in Montana. Anyway, Mom and Dad thought it best to prohibit me from owning war-related toys; I still remember the sting of disappointment when, at age 7, I was given my first squirt gun. It was shaped like the head of “Tom” from “Tom and Jerry”, had terrible range, didn’t shoot straight, and looked absolutely ridiculous. To add further insult to injury, my sister’s squirt gun (“Jerry”) shot farther and straighter, annoying me to no end. When I was 10, a friend of mine took pity on me and gave me a cap gun he didn’t want; this was promptly confiscated. I got a lecture on the evil of guns (“Guns are bad!”), and I never saw it again. 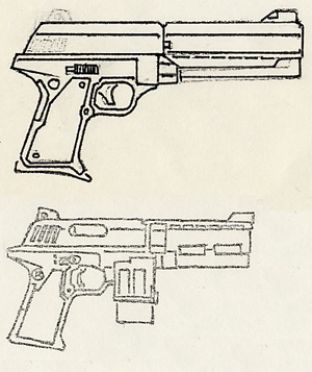 Denied war toys, I drew them instead–planes, ships, tanks…and lots of guns. I studied diagrams of the venerable Model 1911–one of the seminal American handguns of the 20th century–from our 1976 edition of the World Book Encyclopedia. In the 10th grade, I started reading gun magazines smuggled into Taiwan from the Phillippines–then under martial law–by the very same friend who threw his shooting range bachelor party years later. In addition to soaking up a lot of “forbidden” knowledge, I read about the exploits of real-life Texas Border Patrolman Skeeter Skelton. I later wrote a story influenced by this guy in High School and won an award from the English Department. I think my teachers were struck by my depiction of a dystopian world gone awry…but just between you and me, it was just an excuse to draw the gun (shown right) and write about its many interesting design features :-) I kept up on my reading after college–as I worked in the video game industry, it sort of counted as background research .

My first contact with a real gun was in Florida, when I took a 4-hour Concealed Carry License (CCL) course with a bunch of fellow video game developers and artists from work. The first thing that the instructor asked me during the class was whether I was Samoan, which he used as the lead into a story about the mighty .45ACP cartridge, because the standard-issue .38s were just not stopping them fast enough. Although I am not Samoan, this anecdote didn’t exactly put me at ease. Though I suppose for a brief instant I helped the instructor visualize just what the U.S. Marines were up against in the South Pacific, back in the 1800s…yay. After the written test, we got to shot about 20 rounds into a target about 10 feet away from us, thus earning the right to apply for a concealed carry license. I shot very well; apparently, all those years of using computer mice pay off big when it comes to accurate hand control when shooting. I never did get my Florida CCL because I moved back to New England soon afterwards. I didn’t shoot again until that bachelor party in California.

Being Informed, Being Safe

Despite how you may personally feel about guns and violence, I think a rational person should know something about how they actually work. The media and television have fostered a distorted view of how to actually handle a gun, and this ignorance could get you hurt. For example, you might find one somewhere and need to transport it to somewhere safe. Or you may be in the vicinity of someone who is handling one, and with a few cues you will be able to tell whether or not that person is “safe” or a threat. Or–and hopefully this never happens–you may actually need to use one when the shit hits the fan. And of course shooting is fun, as NPR/BoingBoing media sprite Xeni Jardin discovered a few months ago with the help of an experienced shooter. Lacking an experienced shooter for my own guidance, I retook the recommended courses (finding a far better instructor here in New Hampshire) and joined a group that meets at my local range that I found out about during the lessons. I was fortunate to have a public shooting range nearby that allowed me to find the right instructor and start learning the right way to do things.

If you’re starting from scratch, just finding people who shoot is a challenge, because the serious groups tend to be low key. Once you find them, they are the nicest people you’ll meet…patient, grounded, and motivated to learn. The Fundamental Rules of Gun Safety, the NRA Safety Rules are pretty much the standard; states that require licensing will test you on these very rules! When I’m introducing gun safety to people, I focus on the first two rules:

If you follow these rules to the letter, you will be 100% safe. You absolutely should have an experienced shooting buddy with you to watch what you’re doing; this will help develop conscious safety at all times. Ultimately, you want to be unconsciously safe, which is when you are safe without even thinking about it. But before you get there, you might do one of the following gaffes:

You should, of course, know and understand all the safety rules. However, these rules presume some knowledge about operating a gun (like, how to unload one), or how you’ll be using a gun (the “keep gun unloaded” rule, for example, makes no sense if you are carrying one for personal defense). So I focus first on the two big rules to establish the safety mindset right away using a toy gun as a prop. The other rules make more sense when we start talking about how to operate (or “administrate”) a gun, and can practice with the real thing.

There are a lot of good books on shooting and safety, but I haven’t yet come across a basic diagram that looks nice and fits on a single page. This first PDF is about the two main rules of firearms safety. The layout is a little cramped, but it’s nice because a big photo reinforces the text. I think new shooters will find it informative. I’m planning on creating sheets that introduce the other rules and how to operate a pistol; if there’s anything I like more than shooting guns, it’s taking pictures of them :-)

NOTE: Please do not direct-link to the PDF file.

UPDATE 2015: An updated design is available for a dollar donation!

My Dad, who’s been visiting for the past couple months, commented:

At the time, we thought that by not exposing you to these kinds of things you would lose interest in them. Well, that didn’t work.

However, having gone through the process of rediscovering my childhood passion as an adult, my perspective now has made it a much more serious and reflective experience. Don’t get me wrong…it’s also just a lot of fun, but I am glad that I didn’t get a lot of stupid ideas in my head as a kid that I would now have unlearn. Being informed and experienced is the way to go, I think, no matter what your age.