I have been very distracted lately. There’s a lot going on with personal and client projects, and I’ve had to be very flexible with my scheduling. Because of this, I find myself task-switching more often than I like, which means reloading my brain with another context and skill set. Jumping between writing code, doing design strategy, and visual design is (for me) enormously taxing. For example, I forget how to have a normal conversation after I’ve been coding for a while and talk like a malfunctioning robot. Likewise, moving from the more visual/social activities into programming demands that I retreat into a little box, which I don’t like doing. Household chores are another drag. 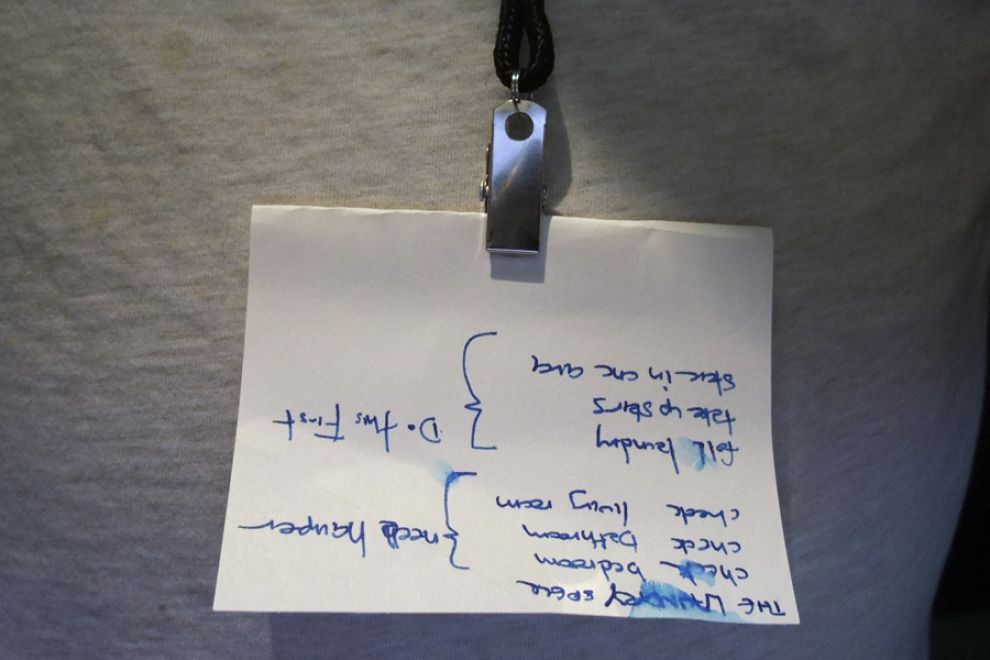 I’m at the point now that my brain is in full rebellion, and is eagerly jumping at anything that looks like a fun distraction. It got so bad on Saturday that I actually wrote down that I was going to do LAUNDRY on an index card, complete with a step-by-step list, and then used an old badge lanyard to wear around my neck. Everytime distraction threatened me, I would look at the card yoked below my neck. It looks ridiculous, but I can pretend I’m at a Laundry Conference, and it actually did help me muddle through my laundry task list. Yay! 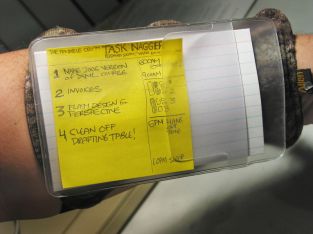 Because I like ridiculous ideas, I do like the concept of wearing your tasks. I once made an Index Card Scabbard out of an archery arm protector and a pen protector sheath. It’s one of those love/hate things; a hardy few proclaimed their support, while others posted funny remarks on Lifehacker, along the lines of, “I’m not as dysfunctional as THAT idiot”. That said, perhaps it is time to bring it back. I certain could use it. In fact, there are a number of options available out there.

Recently, reader Jesse’ forwarded me some links to a “tactical arm board” and similar products used by pilots, as he had been using them himself and wanted to let me know what he’d found:

p>The lanyard approach, if it’s not uncouth to toot my own idea, is less extreme-looking than any of these products (though I still want them all!). I may go find a nice piece of wood laminate and cut a slot in it to serve as a surface for sticky notes so I can wear them around my neck. For extra stealth, I could make it look like an actual security badge on the outside that flips open somehow at the press of a finger to show you your to-do list. Or, I can just use thick index card stock and a slot punch. The important part to me, though, is the step-by-step list that accompanies the to-do task list. Might not be a bad thing to do; reader ChewLH mentioned another aviation-themed product idea to me a few months ago that might work well with it, but it’s not my idea to share.

As a concluding observation, there’s something very satisfying about wearable information aids. Wearing a watch, for example, has been very reassuring when I’m flying. I usually just use my cell phone to tell the time these days, but having a watch(especially one you like) gives you INSTANT TIME OF DAY. That little bit of assurance helps keep me from freaking out when I wonder what time it is, for the 100th time, as I’m waiting to board. To-Do lists have something of the same power, but when they’re not easily accessible they lose their immediacy and directness; this is one issue that smartphones and PDAs have, as the to-do list takes a few taps to pull up usually, and in the process you may get distracted by something else you see.

There may be something more intimate–and therefore stirring more commitment–about wearing your task list. Unfortunately this conflicts with looking organized; wearing your list around your neck makes you a target for ridicule if you’re not a pilot, football coach, astronaut, or squad leader. Those watch-shaped Post-It pads are a step in the right direction, but this will be a tough one to crack.