NOT Groundhog Day Resolutions for April 4 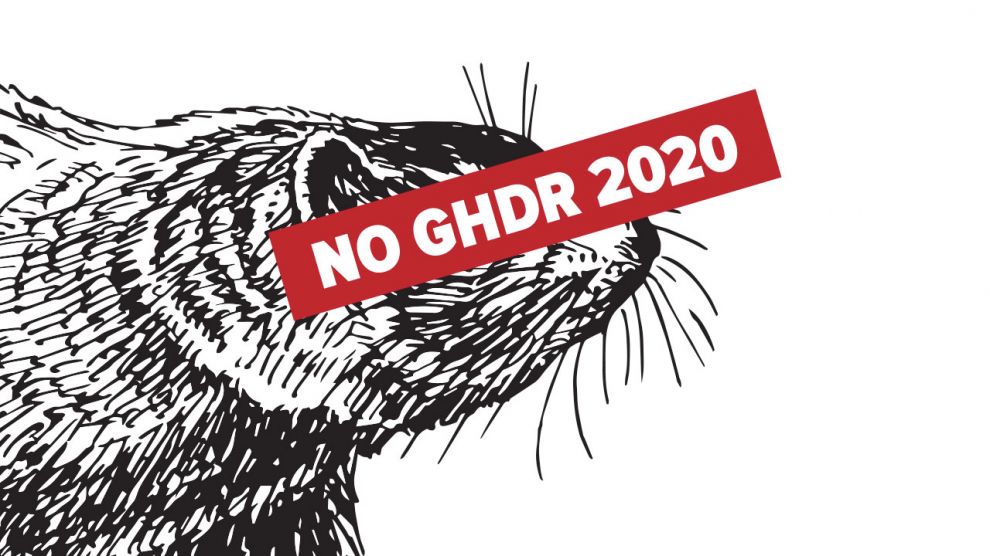 For the second “Not GHDR Review”, I’m taking this time to reflect on what happened last month. But first I’d like to share some takeaways about 2019.

At the end of 2019, I was feeling pretty burned-out. I had dropped my tracking habit when I purposeful reduced the number of things I was trying to do each month as part of my 2019 Strategic Goals. By December I was down to a single focus: becoming a better software developer. This has not been a goal of mine since maybe the 10th grade back in 1984; after that I had become more interested in writing and computer game development. The reality of 2019 was that software development was paying the bills, and my writing and design projects were not. Software development is hard enough for me that it consumes all of my mental resources, and with upcoming deadlines and thorny problems to solve, I had to make hard choices and cut aspirational work that wasn’t paying bills. If I had chosen to continue doing half-design, half-blogging, and half-programming, the reality would be I would get NO PROGRAMMING done. Or more accurately, the programming I did would not be up to my standards of excellence. I needed singular focus, and with a single focus detailed goal tracking became superfluous.

So this year I’m trying something different with having just a single focus on software development. This is not as limiting as one might think:

On average, I seem to manage 3-5 hours of focused work a day on days where I don’t have any distracting meetings or outside errands. I try to pack all meetings and outside errands on two weekdays, leaving 3 days (5 if I work on the weekend). When I’m fully in programming mode working on a complicated system, I switch to a biphasic sleep schedule and do two 5-10 hour sessions separated by a 4-6 hour sleeping period. It is my most productive mode, and I’m finding it necessary when starting a complicated new system design. Maybe it will get easier with more experience, but for now I’ve accepted this is the pattern that is most reliably productive. It’s not great, but it’s what I’m working on improving.

On Not Being Negative

It’s hard for me to not resent my limitations. In years past, I resented how much time it took me to get evenly minimally competent at doing software development. I also resented at not having the time to work on my interesting personal products, and I felt trapped by my own lack of ability and circumstances despite having a lot of freedom.

That said, I also knew that even after 13 years of trying to do the great big personal things, I had not done them in a way that felt like an accomplishment. At least, I wasn’t feeling it. I had arguably done a lot of things, but I hadn’t achieved “the thing”.

I have several hypotheses about why this has been the case.

In 2020, I’m actually trying something different by counting on my distractibility to keep me sane this year. My reasoning is as follows:

All I need to do is ensure that I’m (1) using my intense focus energy reserve on software development for 1-2 hours a day and (2) I hit my overall billable hours target for the month, which can include tasks that don’t need intense focus

I’m doing a variation of “structured procrastination” in which I am leveraging a small amount of disciplined labor to also provide some scaffolding for my natural distractibility. I’m still working out the kinks in the system, but it seems promising so far!

What I have not figured out is how to achieve those other personal goals that I’ve dropped. The major one is relaunching the blog and creating creative communities of the kind that I’d like to be part of. However, I can worry about that after I hit the next big milestone in late April. I am still writing and thinking every day, just in the Virtual Coworking Community and not here. There are SO MANY THINGS I want to do, but maybe I do need to focus on one thing at a time and be OK with that. VERY HARD. 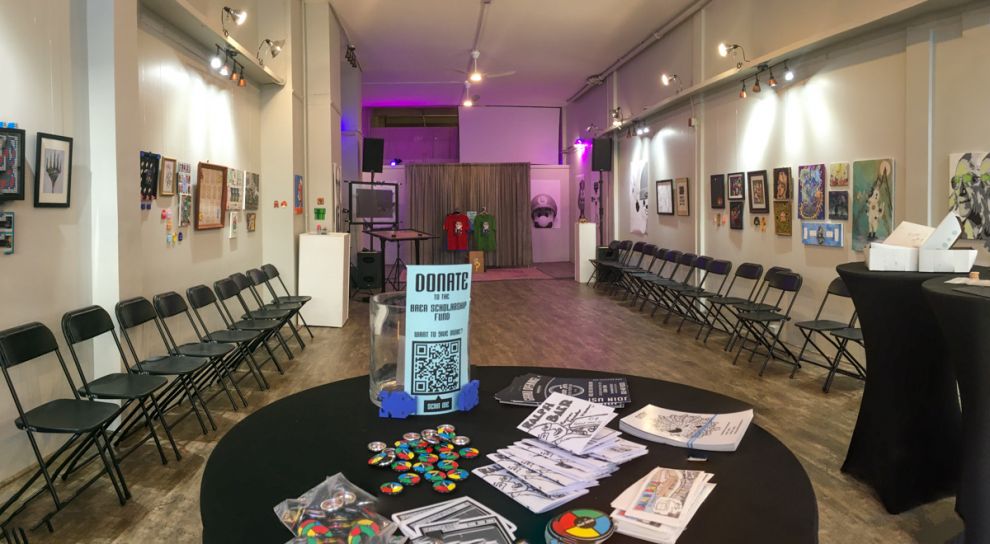 At the beginning of March my friends hosted the second annual Ralph Baer Birthday event. All of us were really busy this year, so we reran last year’s playbook. For my piece, I wanted to shrink the size of our Table Tennis recreation so it was more portable. 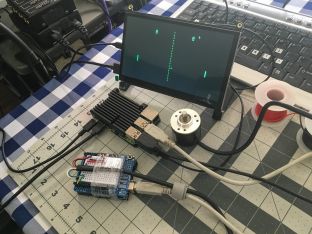 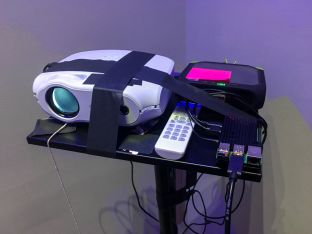 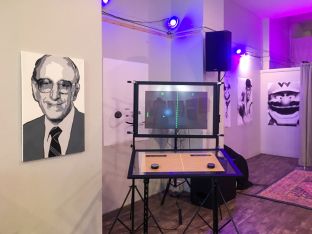 Last year we had a dedicated Mac Mini and a separate Panasonic Toughbook running a projector. I wondered if it would be possible to get it to run on a $50 Raspberry Pi 4. With some tweeaking, it was able to run fast enough without major rewrites, though it only runs at 30fps and is really inefficient. I added a $40 refurbished LCD projector with an old speaker. Ryan provided the cheap projector stand and built the controls by reusing last year’s metal struts. The resulting kiosk is a $35 floating frame from AC Moore with about $9 worth of smoke gray window privacy film. It works well enough.

This was a great application of the stuff I’ve been building in the software development I’ve been doing, BTW! Unfortunately, our event coincided with the arrival of covid-19 in the US, and the uncertainty in early March killed attendance. I did make some new friends though before going into coronavirus lockdown!

Now that I’m sheltering at home, I’ve retaken an interest in kimchi. One of the last things I did with some friends was head down to the big Korean supermarket in Burlington Massachusetts to get Kimchi Soup. Afterwards I got a hankering for a more robust version of it, so I started researching Kimchi Jjigae, which is a thicker version of the soup that is a great use of kimchi that has developer a powerful funk. I got Maanchi’s cookbook (which is really beautifully organized and designed) and followed her Youtube video to make it: 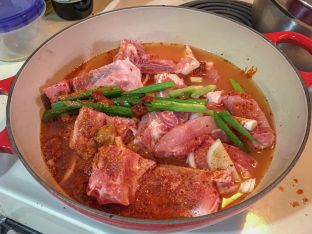 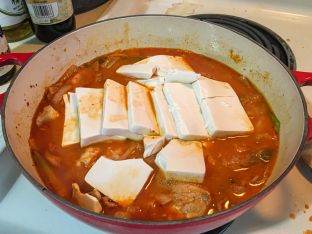 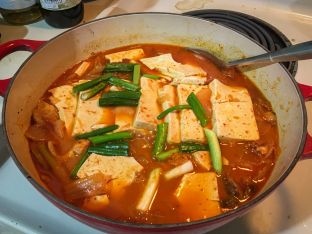 It came out pretty good. It’s very nice on rice. Mmm. And since I’m staying close to home these days, why not make my own Kimchi? 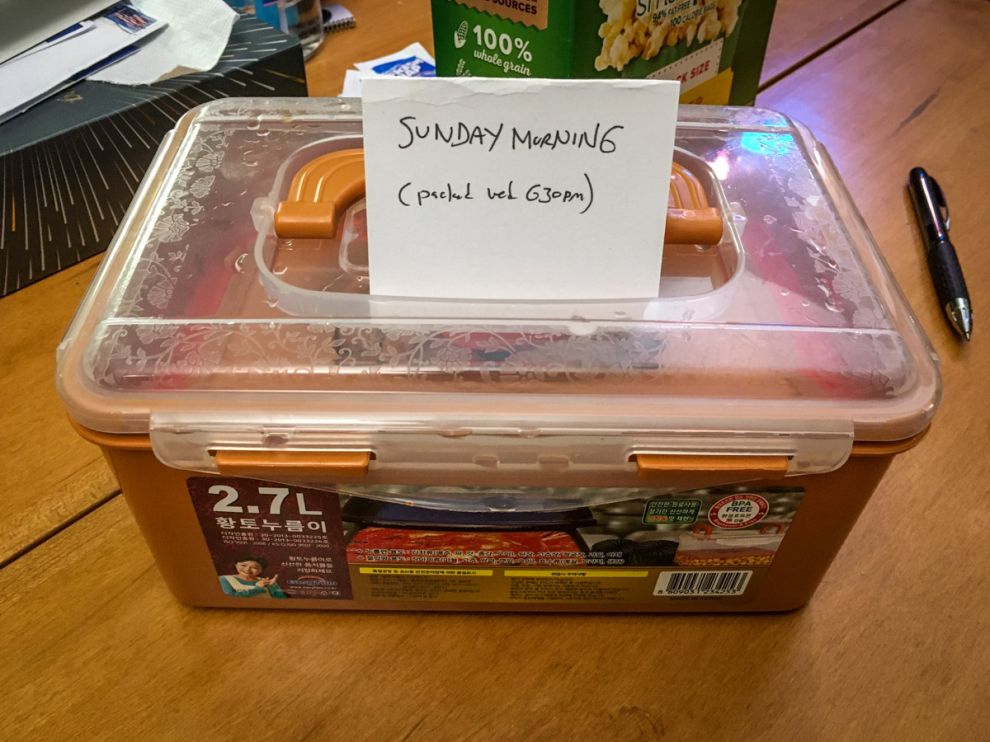 I had purchased this cool pickling container from HMart last year, and haven’t had a chance to use it until this week. Tomorrow I get to open it to see what it looks and tastes like! :-)

That’s a Wrap for March

So that’s what’s been going on with me. I’m doing well, trying to get used to this “singular focus” idea and maintain a positive attitude toward everything. I’m still not doing much with blogging or the stationery business. My Taiwan Trip has been cancelled this year, of course, so I won’t have the eight week distraction that this usually makes my work challenging. We’ll see how it goes!