Hey everyone! I just got the first Groundhog Day Resolutions (aka GHDR) MONTHLY REVIEW out last week, so it’s time for the first WEEKLY REVIEW to make sure I’m staying on top of things. My memory is pretty terrible and if I don’t review every week, it is less likely that I’ll maintain momentum.

If you’re just tuning in, this is the year that I’m trying to establish a more driven approach to goal fulfillment. I’ve already figured out how to be productive by harnessing my natural inclination to explore, learn, build, and share, but doing hard and boring things continues to elude me. I’ve had some interesting insights this month:

Let’s get into it!

This Past Week on the GHDR Hard Path

I failed to make progress on my so-called “Hard Path” GHDR goals, which consist of things from Feb 2 Kickoff:

This was depressing. However, I had been under the impression that progress was happening. All of these from the March 3 review:

So what gives? I really have two kinds of goals:

Both these types of goals support my overall strategic goals to pursue Software Development Mastery and Improved Ecommerce Operations, which I chose because they are stepping stones to greater (and presumably profitable) enterprises that I can’t easily make myself or fund. Software development also pays the bills, and a big goal for the first part of the year is to pay off all my debt.

For now, I’m really focused on (1), which is the stuff that needs to happen now. I really want to get to the future opportunities projects in (2), but I think they will have to wait until I get back from my Taiwan 2019 trip to visit family. Having fun projects for the summer is something to look forward to as well.

With this insight, I’ve decided to make the following DON’T WORRY / DON’T DO list for the coming month:

I think it’s a good idea to remember not to be so hard on myself.

With that out of the way, let’s get down to evaluating the week.

QUICK GRADING OF THE PAST WEEK: B+

I continue to visualize my ‘mental capacity to work’ as 3 slots of attention that I can juggle during the week. Two slots are assigned to meet the needs of “work goal”, and the third slot reserved for meeting my own varied needs (it’s really just a way to reserve time for myself). A refinement to the model is considering the timeframe that these slots are set, and allowing myself to assign all three slots to a single task if needed. In general, though, the timeframe is WEEK BY WEEK and I am using each slot for a different assignment.

This was a good week because of the Ralph Baer project opening, and it went pretty smoothly. I learned a lot, and am exceedingly grateful to be part of such a generous and capable friend network. As a result I think I am a better person than I was before, and this realization humbles me. I also did get a few things done for software mastery, taking my time to learn some new things, and largely kept my impatience under control. I also made progress writing new copy for the StickyPad release that’s coming up soon. I’m a bit behind on the package design from where I wanted to be, but I’m only about a day behind schedule and it is recoverable.

TARGETS FOR WEEK (WITH CONCRETE TARGETS)

For next week, my goals are: 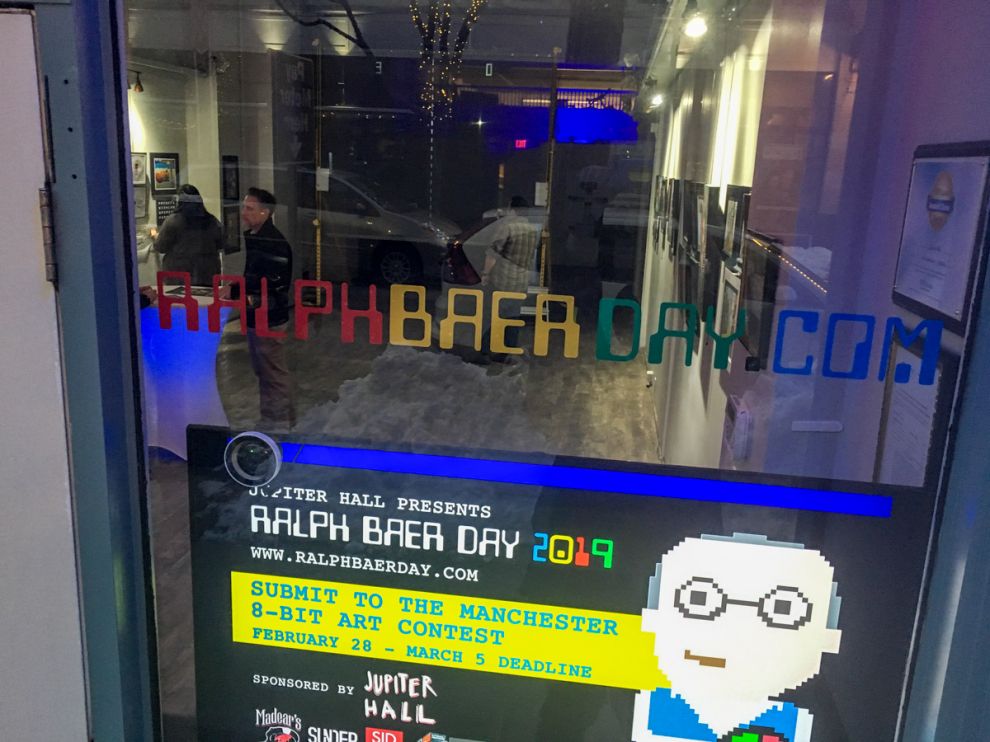 As I mentioned the Ralph Baer Day celebration in Manchester, which involved me writing software for a giant PONG simulator, went well! 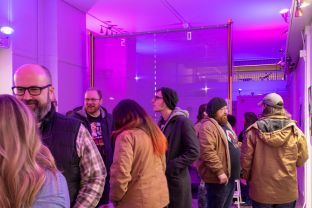 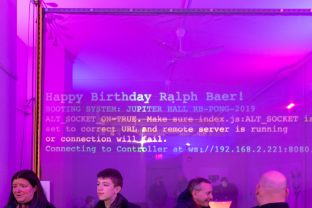 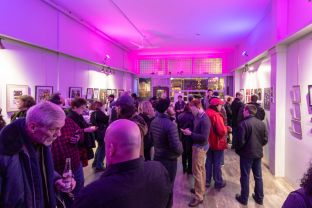 The event itself was at a small arts venue called Jupiter Hall on Hannover Street in Manchester New Hampshire, just across from the Palace Theater. It’s a single room that is repurposed for each event; we had full use of the space. The location is pretty good, and it’s near a lot of the interesting things on Elm street. Attendance was pretty good too on opening day! I had some time to write some cool diagnostic messages so if the server connection was lost, the system would display a reconnect message. I like writing code that displays system status (above middle) and recovers from errors by itself :D

As for my personal achievements, I have been craving Mediterranean food on my weekly diet cheat day. Where I live there aren’t many options, but a place I rediscovered near the New Hampshire / Massachusetts border has really good babaganoush and pita (below, left) with Chipotle-style service. The humus is also really good. 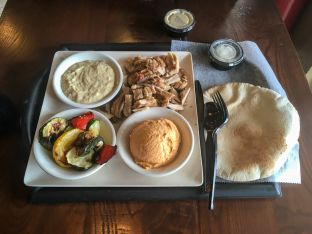 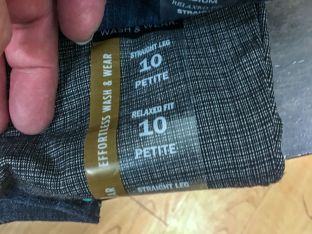 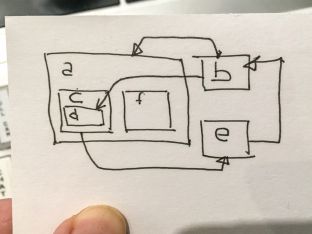 Finding pants that fit me has always been hard; I have big thighs and for years had to have all my pants hemmed by a tailor. Being recently transgender, though, has broadened my choice of clothing considerably, and I have discovered that womens petite jeans fit me much better than anything I have worn before. I never in a million years would have thought “petite” applied to me, but knowledgable friends have informed me that “petite” is about proportion, not “tinyness” as I had previously assumed. The Wikipedia article on Women’s sizes suggests that “Junior” sizing might work even better because they are NOT for “younger people” as I thought, but are for “people with less curvy bodies”. This was corroborated by Courtney in the Virtual Coworking Chat Room, who knew rocker guys that bought their skinny jeans from Junior section.

Finally, I made a nice breakthrough working with directed graphs for the software development I’m doing (above right). The code is going pretty well, but I needed to draw this so I could actually tell if it was working correctly. Feeling pretty good about it though :-)

Good week. This week I think will be good too. I have much fewer errands this week than last week, so I’m hoping I will bill a solid 20-30 hours. That would put me comfortably within striking range of my billable hours target, which would then also help get me that much closer to my debt reduction goals.

Thanks for checking in with me, see ya next week!