Ok, let’s officially kick of this year’s Groundhog Day Resolutions (GHDR), which is my yearly attempt to make broad improvements to my life. It’s taken quite a number of years for me to figure out what was important to me. When I first started doing these in 2007, I focused on supposed weaknesses like “lack of discipline” and “lack of internal motivation” and tried a lot of different ways to kick-start my productivity. In subsequent years, I embraced my so-called character flaws and looked for alternate metrics where they would be assets.

This year it occurred to me that I could draw a detailed theoretical model of how I work, and use that as a base for making my GHDRs. Here’s what it looks like: 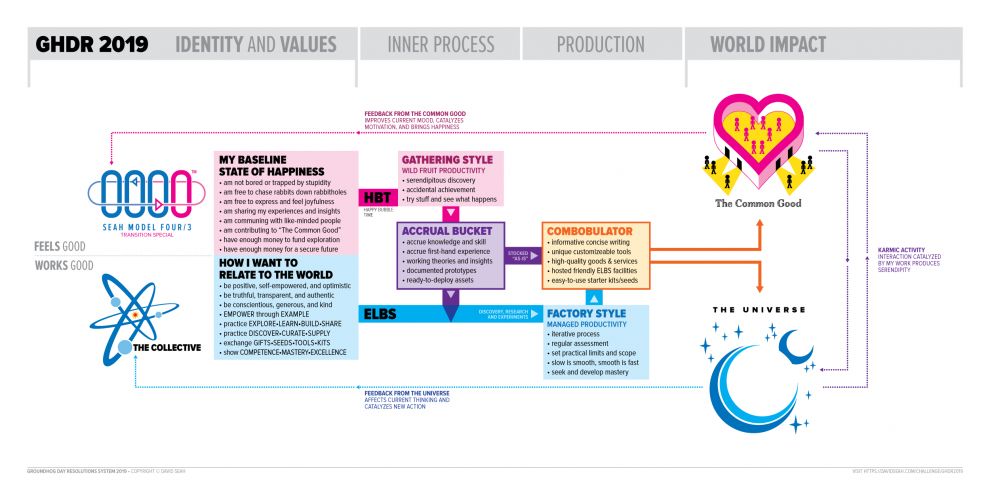 The diagram incorporates a lot of insights about my desires, ambitions, interests, and productivity tricks (many of which are summarized in last year’s kickoff Let’s get into some of the details! 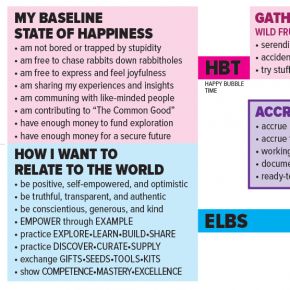 Starting again from the left side is a working definition of my “essential nature”. I’ve refined this model over the past 12 years, and I have a high degree of certainty about them.

These two sides of me are in constant communication with each other, and one of my self-discipline tricks is to figure out which one should be in-charge so I can tell the other one to be quiet. 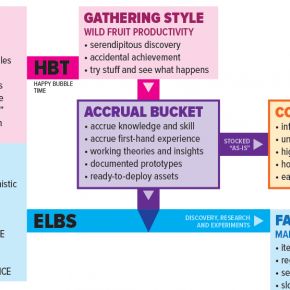 Next is the first of two productivity systems: the Gathering Style Productivity model (see this section). The elements shown here are: 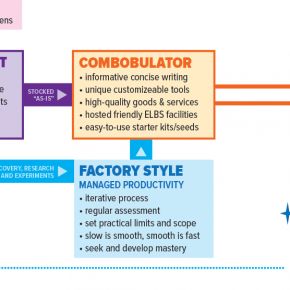 The output of ACCRUAL BUCKET and ELBS flows into this section, producing more “finished” work.

The output of the COMBOBULATOR is available to show to the world. I firmly believe that if you want to change the world in any way, you’ve got to throw something of yourself into it. The original Concrete Goals Tracker (CGT) uses this as a basis for its point system; this old 2007 article on using the CGT for goals gets more into my theory about how this works.

The output of the COMBOBULATOR in Segment 3 goes to two different places:

THe other two are part of my inner core that are both the INITIATOR of action and RECIPIENT of feedback from the world. Without feedback, life is super boring!

That’s all the main system elements. There are some additional notes on the diagram which you can read if you expand the diagram.

As I mentioned, this system diagram is a working model of how I work; my big insight for this year is that GHDRs can map to a subset of the system. I’ve highlighted the critical GHDR path in yellow in this version of the diagram: 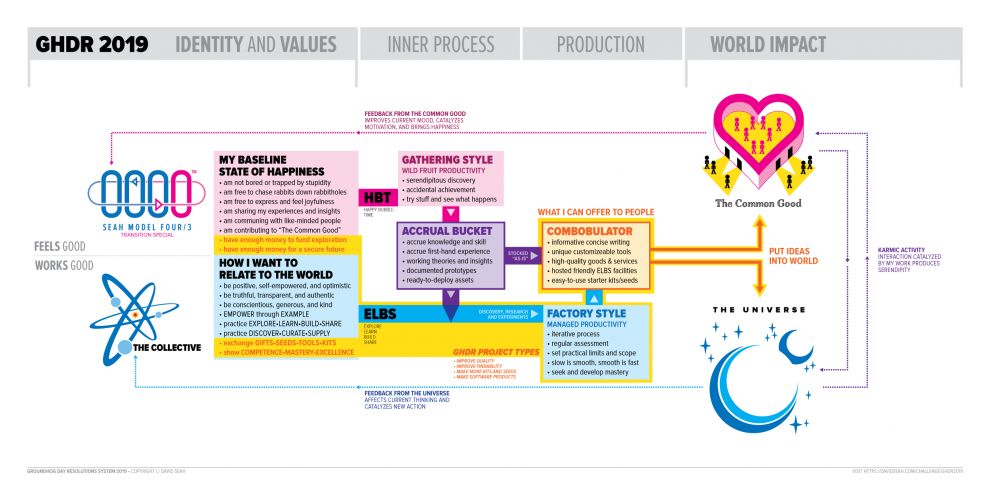 GHDRs are for improving some aspect of my personal productivity, and the overarching wish I have is to transform myself into someone who generously provides useful ideas and goods. The highlighted areas emphasize the pathways that are related to producing such things so that my baseline happiness and relationships values are fulfilled.

It’s also worth paying attention to what is not highlighted by the GHDR path. While the GHDR path will require learning a lot of new things and struggling to produce polished work, everything ELSE on the list is stuff that has becoming deeply-ingrained. They are all things that give me strength, power, and ability. This is the first year I’m looking at my GHDR path and think, “hey, this might be doable”.

I didn’t hit me until I finished this diagram, but I have solved a HUGE number of challenges related to personal productivity, time management, self-motivation, self-acceptance, and community building since 2007. There is personal truth powering every box, arrow, and line of text. 10-plus years of experimentation and self-analysis have gone into the making of this diagram, and I can speak at length on every aspect of it. I have all kinds of tools and tricks that will help me produce the goods that my business mogul role will need. It might seem odd that “business mogul” is even something I want, but I see the ability to make money as being important for funding future experiments and fueling the growth of THE COLLECTIVE and THE COMMON GOOD. I want to learn how to CREATE AN ACTUAL JOB and help grow the pie for everyone. It’s an interesting problem that’s outside my experience. But first, I need to figure out how to support myself in such a way that I still have the freedom to practice my gathering-styled, happy bubble-filled trans-femme experience and produce bad-ass tools that people love using.

So that’s the general state of my Groundhog Day Resolutions now! Tomorrow, I’ll come up with the actual list of GHDR projects and detail the processes that will be used this year.