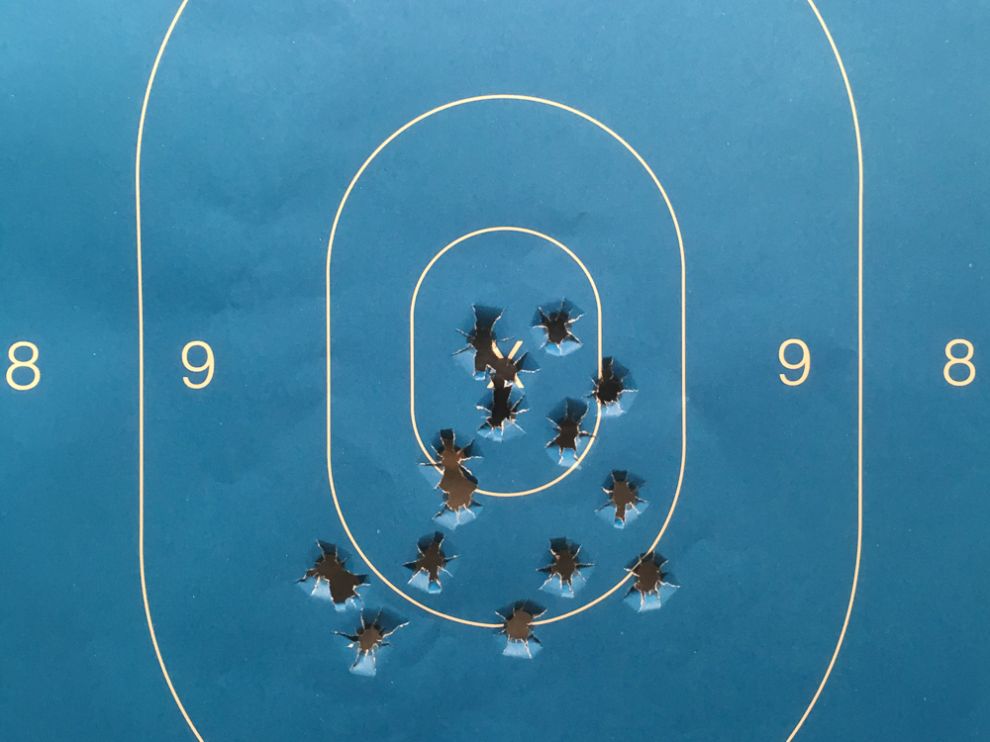 In Part I of this month’s Groundhog Day Resolutions review I talked about the tantalizing possibilities of detoxifying crunch time as a way of battling my tendency to be bored with “slow-and-steady” approaches to work. I think slow-and-steady (SaS) DOES work, but it doesn’t come easily. I tell myself that SaS works because (1) learning takes time and (2) figuring out how to make something complicated that works well takes even more time. There is no avoiding that, I might as well embrace SaS and be happy because I AM SO WISE…?

Bah! In my heart I know SaS sucks. Accepting it doesn’t mean I have to like it as is. What is missing is the sense of excitement and adventure:

That seems MUCH MORE to my liking! So let’s see what I can do with that idea in Part II of my Groundhog Day Resolutions Report for August 2018!

The Major Achievement of the Month

I’ve been doing a quick weekly check-in with “virtual coworker” Jakob in my Discord Coworking Chat Room. He’s an organizational development guy with deep roots in large scale tech, and during our check-in he has me share biggest win and where I’m stuck. I can see it being effective for a high signal-to-noise communication style in a company, and it has also been working for me.

In the spirit of the biggest win, let me try to describe the Javascript work I’ve been finishing over the past few weeks: I made a system to let researchers with basic programming knowledge easily pass messages+data between webapps without having to write any setup code or manage asynchronous handshakes. You don’t have to define message formats ahead of time. You don’t even have to know what other webapps understand what you’re saying or know their addresses. The system will handle it. You can talk to as many webapps at once as you want and receive all the data back with one call.

What makes this a win?

While there are already systems out there that do networked asynchronous communication, this is the one that I made the way I wanted it to work. I understand every design decision I made in it, and I didn’t let my lack of Javascript, network, or database design stop me from trying to make a system that I thought would be broadly useful for my peers. I tried to make it as clear, simple, and expressive as possible both in the design of the system and the structure of the source code. It deviates from several popular ad-hoc Javascript conventions, but it isn’t entirely ignorant of them either. I would describe it as a solid “journeyman piece” that demonstrates intermediate mastery code concepts with a few tweaks of my own. It isn’t quite a master work, but certainly it is something that contributes toward the making of such a work in the days to come as more grant money becomes available.

I feel really satisfied with my progress, which is a very rare feeling. I would like to have that feeling AGAIN.

What worked really well in July was applying the crunch mode mentality in a non-toxic way. So let me add that into the mix of Ground Rules for August Work:

My most critical personal project is, I believe, the KM/SSG knowledge management website/project. This is my public lab notebook design that I hope to use both as a secure replacement for this website as well as a useful knowledge management system for thinking. I have made very little progress on it, but I think it’s critical because it addresses the main bottlenecks in my creative work:

Currently I have several systems that I use together to do my work, but I think it could be much better. I theoretically know how it works, but I just need to make it. So I’m thinking of allocating a time block of two weeks to this project, and setting a relatively simple milestone delivery goal of system produces website by project folder to just get the content scaffolding and information hierarchy in place. The interesting capabilities come from writing software that works within that scaffolding.

I have two active projects, the NetCreate digital humanities project (for which I made the networking system) and some kind of programming concepts project that has yet to kick-off, so I know very little about it. We generally work using an “Agile-like” approach, so I should be able to block out the time in a way that is compatible with what I’m thinking. In the past I’ve called this Themed Work Weeks, where I could switch back and forth between personal and billable projects.

There are a few changes I’m going to make to Themed Work Weeks:

With only two projects + social time in my rotation, I am suspending the following GHDR goals and related activities until it makes sense to me to start them up again:

The hardest part about dropping all these projects is that they produce products that people like. And strategically speaking, withdrawing from the public feels like a promotional/marketing mistake. However, I also know I am not doing my best work in these areas anyway. Putting my energy into the new system will help me do my best work again and also provide NEW methodologies. I think my social media profiles can survive a few months of downtime. People will come back when there is something good to see, and being able to produce better content and share new tools is how I want to do that.

Other Stuff that Happened

While July was filled with the stress of travel and crunch mode, I think it’s worth remembering that other life experienced happened too. 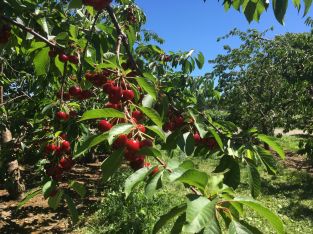 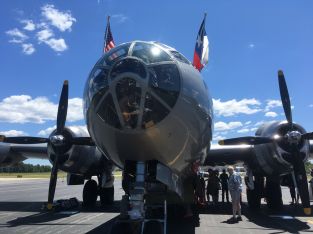 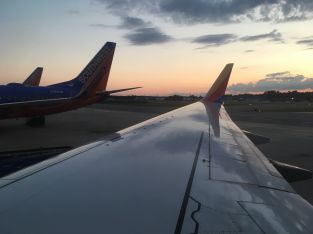 I went cherry picking (LEFT) with my good friends Sid and Sara. The season is just two weeks long, and I have missed it for the past 18 years…until now!

I took a day to visit a B-29 bomber from World War II (one of two in flying shape, MIDDLE) that was in the vicinity for the weekend, and also enjoyed breakfast at the tiny airport cafe since it was my “diet cheat day”. Speaking of dieting, I am down almost 30 pounds since starting my diet at the end of May.

I flew to California on Friday 13th (RIGHT), the first time I’d been on a trip in the US for a while. This was made possible by having a house guest that could give my cat his insulin injections while I was away. 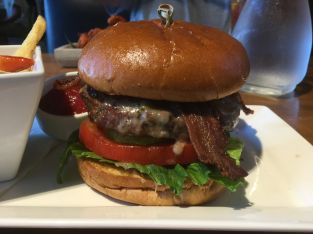 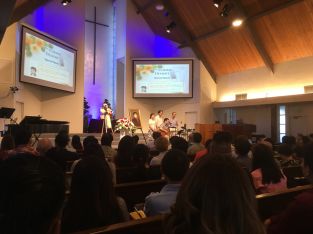 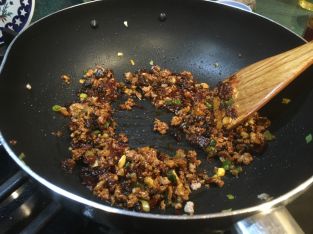 In California, I met up with my high school friend Mark, and it was like old times. He suggested I try this peanut butter and bacon burger (LEFT), which was EXCELLENT.

I spent time with family for my Cousin Brian’s Memorial Service (MIDDLE), which was very moving. I got caught up with some other relatives and talked a bit about non-binary/transgender identity with one trusted ally.

A friend of mine claimed he had mastered the cooking of Ma Po Tofu (RIGHT) and so I went to try it. To my surprise, he had indeed made an excellent version of it; the surprise was that he had never shown any interest in cooking before. 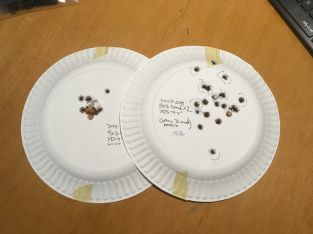 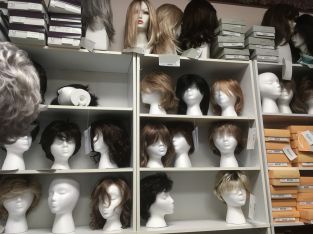 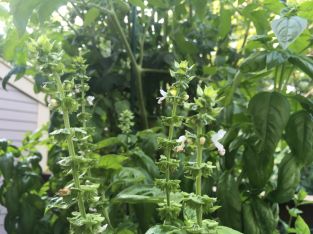 I discovered that a friend of mine recently purchased the same handgun that I have and enjoys shooting. We are both out of practice, so we scheduled some range time to see if we might make a regular thing of it once a month. I compared my accuracy with the old carry gun with the potential replacement** (LEFT), and clearly I still don’t know quite how to get the best performance out of it yet. I can still shoot accurately, though, which was a relief.

My relatives in Taiwan keep suggesting that with such thin hair I should consider wigs. I’m sure the relatives thought I would be looking at MALE styles (MIDDLE) though…heh heh. The wig store experience itself was very interesting, and a good nudge out of my comfort zone. There are a couple of possibilities (and many hilarious fails).

My tomato plant is doing great (RIGHT) and so is the basil and mint I planted with it! Another month and I might have some edible fruit! 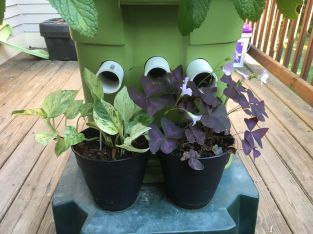 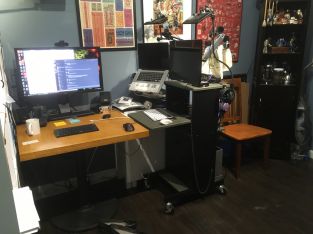 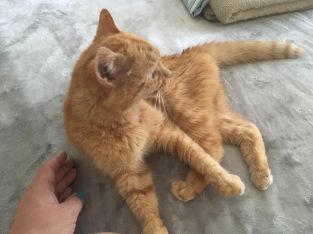 The clover that my Dad planted on his last visit (LEFT) has actually finally taken root. For six months NOTHING was happening, and it’s great to see that it’s producing flowers!

While I was in CRUNCH MODE, I decided to move my computer cart from the living area to the dining area, which has now become a nice computing nook (MIDDLE). This frees-up the living area so my house guests can watch TV, and it is also a bit nicer for entertaining. I find I don’t usually use the dining area for dining anyway, and the new setup is an improvement.

My house guest’s cat Nym has finally warmed up to me, after about two months of glowering at me from afar!

Finally at the end of this report! Here’s a summary of what I’m planning:

I think you could say I am reframing this year’s GHDR goals as a drive to develop capability to make and share high quality content. The two particular types of content I’m focusing on right now is software and knowledge, and these are complicated things (for me, anyway) to make. The proof is in the produce. We’ll see how far I get in KM/SSG by September.

I also have to make some kind of plan to get started on this. I’ll be figuring that out in the coming days and will report in the Discord #accountability room or possibly #talk-creative.

So that’s my plan! I’ll file a report in a week or so.