Dailies 007: Self Care is a Right or a Privilege?

Yet another snow day, digging out from a second blow of 16-20 inches of the fluffy white stuff. THIS IS GETTING VERY TIRING. I’m in a kind of funk…read on for the details!

I have not been productive today at all, nor yesterday, nor the day before. I’m in a genuine productivity slump punctuated by small fits of rage followed by sullen self-recrimination. It’s not actually too bad now that I have recognized that it’s happening; as several friends have pointed out, it might be a sign that I need to indulge in some self-care. I keep thinking that self-care is a conditional privilege that is earned through hard work, and felt guilty when I indulge in myself and then try to remove the joy from it. But perhaps, just perhaps, I should think of it as a right to take the time to take care of myself that is not balanced by a large amount of hard labor. The other thought is that I am falling into the bad habit of being hyper aware of time passing by and this has put me into a miserly mindset that turns into frustration with my seeming lack of progress and predictability. If I am really going to follow the “gathering model of productivity”, though, I need to accept unpredictability as part of the model. I just didn’t expect a 7 day slump. 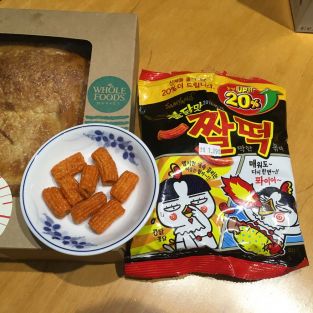 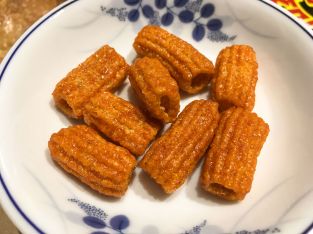 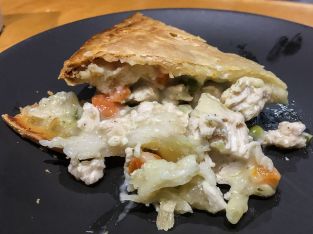 In other news, I’ve tried a new spicy crunchy snack from Samyang, a South Korean food company that makes really spicy noodles; you may have seen the numerous Fire Noodle Challenge videos on YouTube. The “ZZALDDUK SNACK” version seems to be made out of wheat with a sweet-hot glaze lathered over it. It’s pretty good, not incredibly spicy but has a bit of a kick to it.

Since it is also Pi Day I went to Whole Foods to get something to celebrate. They were having a Pi Day Sale, taking $3.14 off the price of a normal pie. I picked up a 9″ cherry pie for a little under $7.00. I also tried out the Whole Foods Chicken Pot Pie, which was a whopping $19.99 for a family-sized specimen weighing around two pounds. I have been tasting various chicken pot pies over the past couple of months in preparation for making my own ULTIMATE CHICKEN PIE, and wondered if this $20 pie would actually be worth it. In short, it was excellent, by far the best chicken pot pie I’ve had in quite some time. It was meaty and saucy without being runny. The vegetables were nicely seasoned and chunked well, and the pie held its shape when I cut into it (a rarity). It truly was an excellent chicken pot pie. This is the new benchmark! There’s a few restaurants in the area that also specialize in chicken pies, which I’ll have to try out.