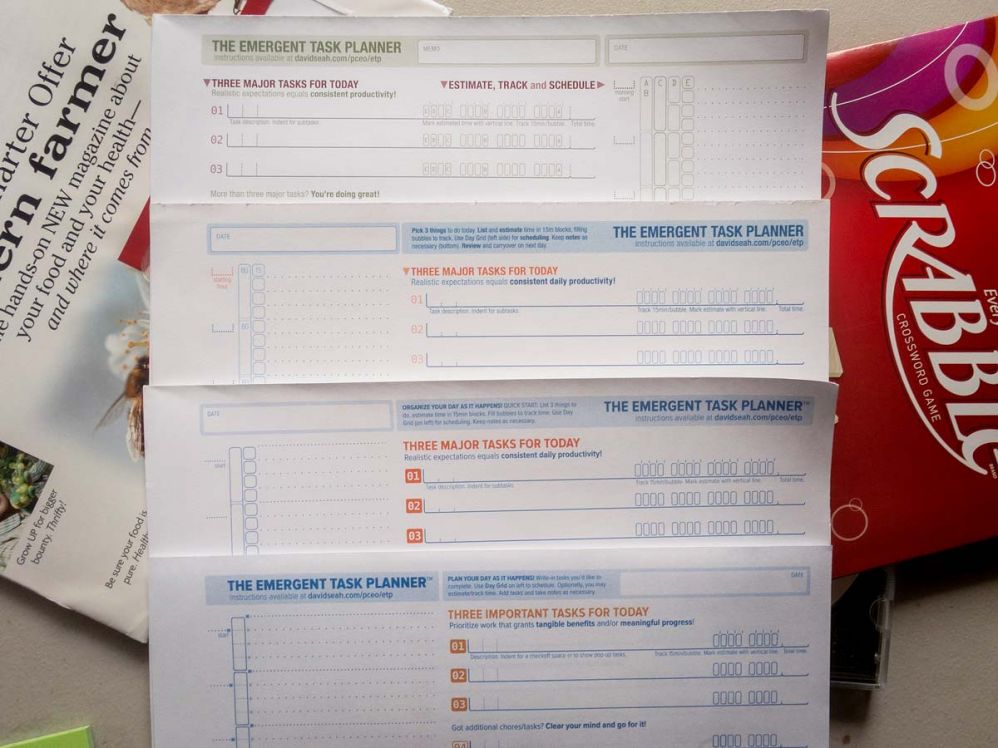 If you’ve been watching my Whats Up Dave daily vlogs, you’ve seen how use the Emergent Task Planner in my daily planning. For quite some time, however, I was DRAWING it every day on a piece of blank paper, because I just liked the act of drawing. For the vlogs however, I started using one of the pre-printed loose leaf sheets (this one) because they were handy. After about three months, I started to want more writing space in the DAY GRID area, and started redesigning the form as I streamed.

A bit of design history: the ETP design dates back to 2006, and has undergone revision in 2009 and 2013. The header image of this article shows the original 2006 printed design that I offered to blog readers through PayPal at the very top. This was revised in 2009 for the first Amazon-fulfilled version, which saw the first major change of swapping the DAY GRID to the left. In 2013 I made some minor cosmetic improvements that have been present in all the full-size ETP on Amazon.

I’ve been sharing the design process with watchers of the livestreams and also with Patreon supporters. This has been the first redesign process that I think I’ve shared so publicly, and it’s been fun because of the interaction I’m having with my virtual coworkers in the DS|CAFE Virtual Coworking Chat.

Anyway, let’s get to the new stuff: 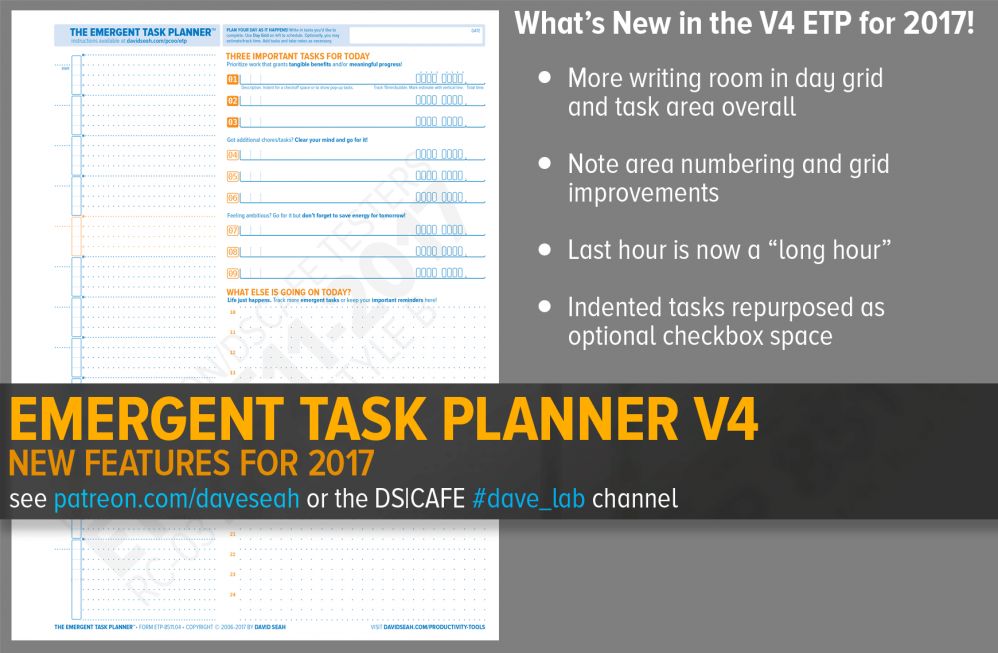 The DAY GRID at the left was widened and simplified by removing the 15-minute blocks and replacing them with smaller markers. To maintain writing room in the TASK LIST, I reduced the amount of tracking bubbles from 4 hours to 2 hours. Focused work, I have found, doesn’t work well for me past about 90 minutes without a break, so two hours seems adequate to me. If you really need to log a four-hour or more task, break-it-up into multiple 2-hour tasks! It feels good! :)

The NOTE AREA has had the number of extra task numbers halved. They now number every other row; before, having a task number on each line made them a bit hard to use when writing out an extended task list. I’ve also subtly divided the space into 4 horizontal areas to make it easier to compartmentalize the use of the space. I have started to leave the first horizontal chunk free in case I have to write down overflow to-dos, and I put my additional notes starting in the second chunk.

The TASK LIST has long supported “indented subtasks”, but in practice I don’t think anyone has used it. I certainly never used it, though this feature was part of the Task Progress Tracker for project management. It makes sense on that form, but it never really worked for day planning.

I have also had a couple of request over the years to provide some kind of checkbox, but never found a palatable design solution. It occurred to me that I could repurpose the indents as check boxes, or even have them still work as indents. I’ve brought back an earlier iteration of the indent lines, and now you can do both. You could also write a job code there too, or just ignore the indents and start writing from the beginning of the line.

Perhaps the most controversial change will be the LONG HOUR added to the DAY GRID. This is actually a feature borrowed from the ETP 5885 Half-Size Notebook; virtual coworker Jess mentioned she really liked it. I had forgotten I had done this, and after some thought decided to try a variation. Here’s the comparison 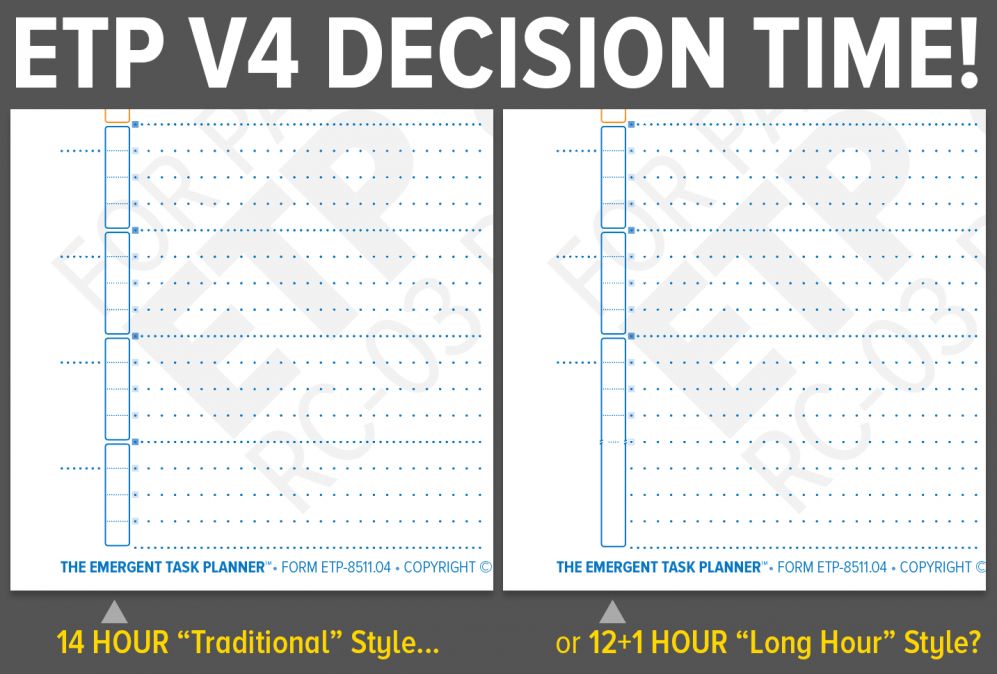 In informal voting across my Patreon, DS|CAFE, Twitter, and Facebook social media posts, there are 6 votes in favor of the long hour compared to just 1 for the original. Unless the votes change drastically by Friday, I’ll be printing new ETP75 and ETP50 pads with this new design.

I’ve changed some of the wording to reflect my current thinking on task management, trying to be helpful and also encouraging in tone (this is an important part of the ETP philosophy).

Overall, the wording changes are more specific in their recommendations now. Before, the tone was more generically supportive. I think these are good changes, but I am open to suggestion!

Here’s a full size image of the new ETP design that will be going to press: 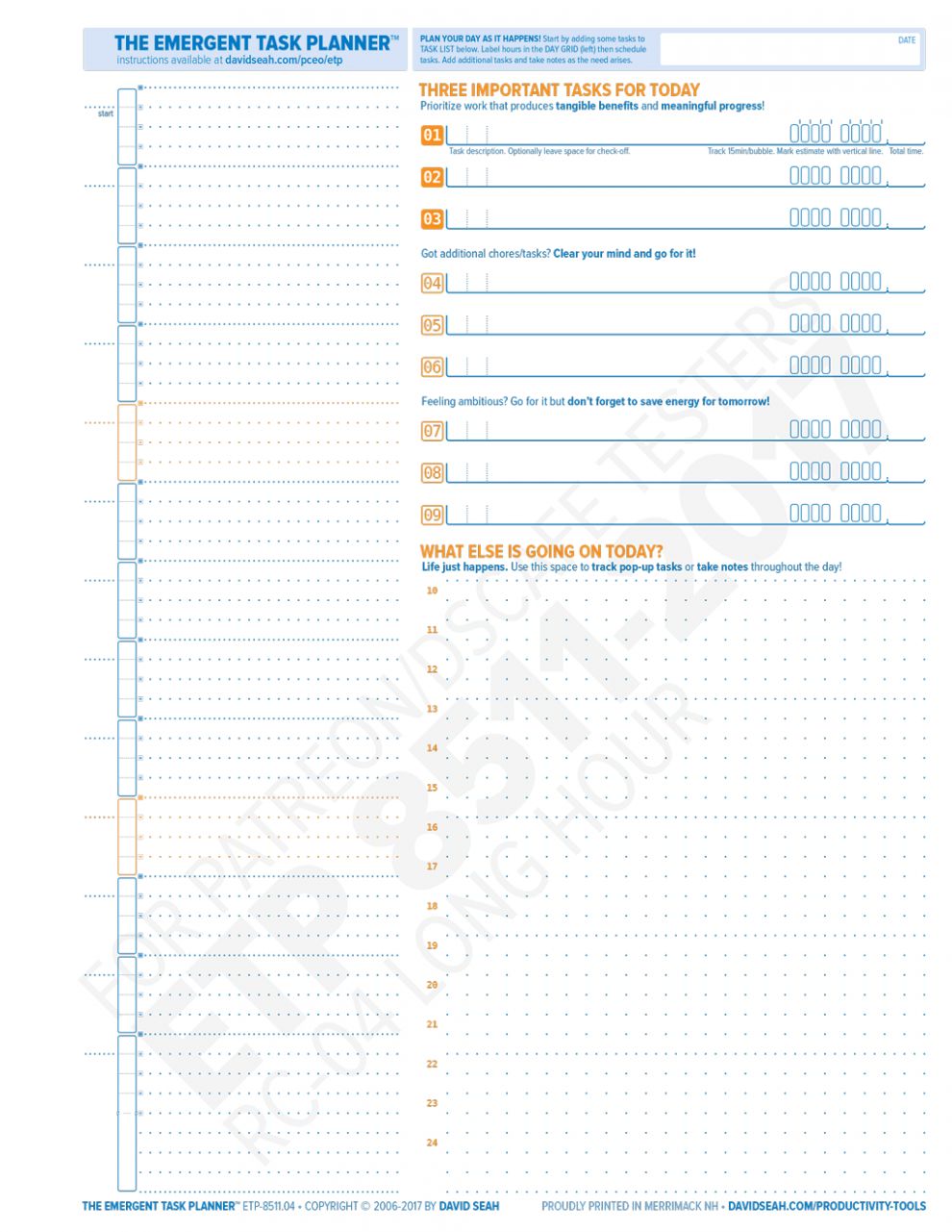 Feedback is welcome! With luck, these will become the new ETP 8511 format for all print products on Amazon and also future digital products.