Happy October 10! It’s time for another Groundhog Day Resolution Review. Last month I was feeling overwhelmed with the number of projects that were not moving, so I decided to focus on two main tasks: billable work and finishing The Living Room Cafe. I’m happy to say that I seem to have stayed unstuck thanks to the coworking chat room and its regulars.

I may have mentioned that the contract work I’ve been doing for the past three years has been extended for another three years, and there are quite a few challenges to solve. We have a major design test coming up in two weeks, and then another major deliverable in January. On top of that, there’s another trip to Taiwan in March which will exact a penalty on my productivity. I was also very frustrated at the lack of progress on my personal projects; the overall feeling was that of being jammed up with too many thing to think about and do.

So…I gave up! I accepted that there’s no way I can do everything I want. This was highly liberating! Next, I noted (for the zillionth time) that it was starting that was hard to do, but once I got started I seemed to be OK. There was just such an enormous emotional pushback against the VERY IDEA THAT I HAD TO DO SOMETHING that my brain would automatically tumble off the road and into the nearest social media rabbithole.

Happily, the coworking chat on Discord is full of people who know that this is their weakness too, and we’ve been banding together to keep moving. I think this has been the greatest discovery of the month: how much having even just a few aligned mind in the room (virtually, anyway) makes a big difference. I guess it might be that if I have to do something, at least I’m not the only one stuck doing it.

Work has been going well. I’m not doing as much as I wish I was capable of, but I am trying to maintain a realistic expectation of what I can do every day. We’ll see how I feel next month.

The other major task was the completion of the Living Room Cafe. There are a few outstanding issues, such as the lack of a giant TV and getting the gallery image hanging systems in place, but after TWO YEARS this project is finally done. It took three trips to IKEA to get the right furniture bits to make it come together. I’m fairly happy with it functionally, though there’s some awkward spots (the dining room tables and the cat litter box) that still need some love. 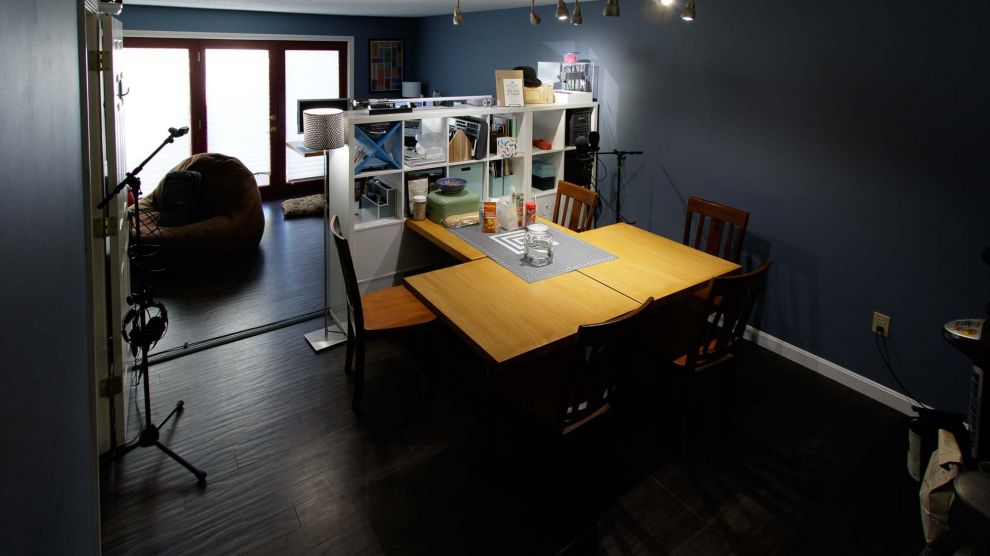 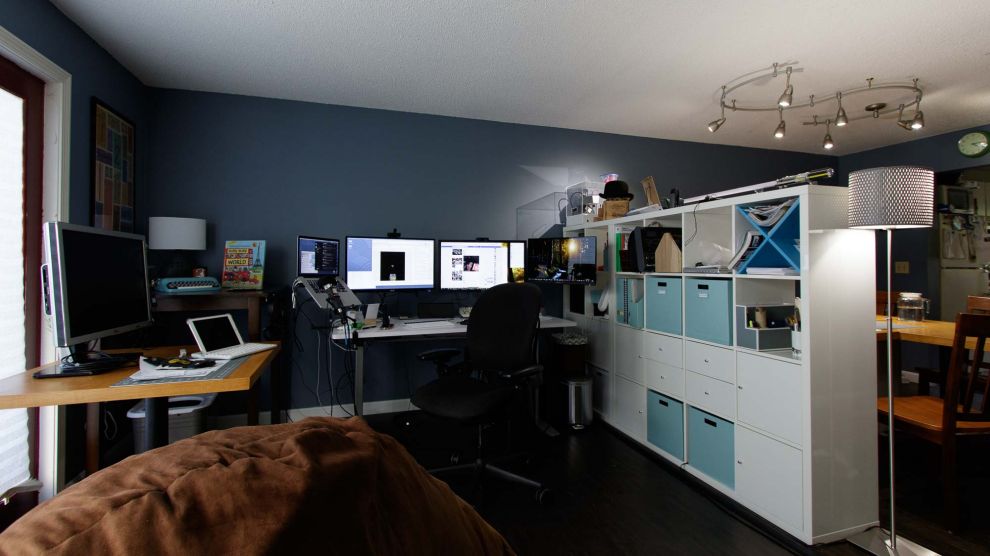 Here’s some BEFORE AND AFTER pictures! 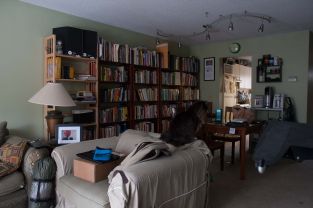 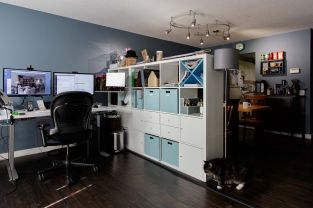 I used to have a big bookshelf, but that’s downstairs. The IKEA KALLAX shelves (2 units) act as a room divider+storage solution. 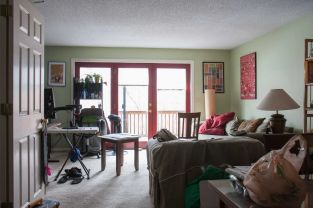 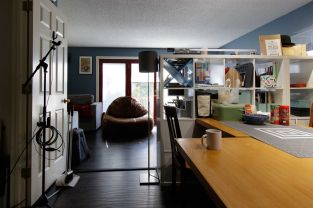 The dining room table was replaced by two 32-inch tables. I have 4 of these tables so they can be flexibly reconfigured depending on the needs of the space. Room divider storage is accessible from both sides, and provides a means to peek-through so the space doesn’t feel too closed off. 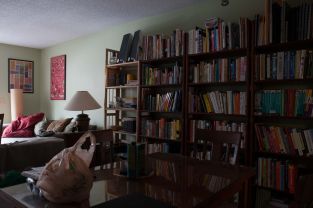 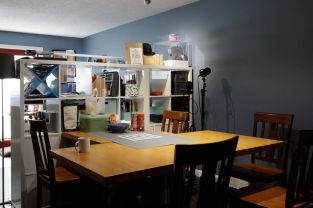 Now that that wall no longer has bookshelves, I can hang some artwork there. The plan is to make it a place for friends to hang their artwork using a gallery-style cable system from Stas or Gallery System. 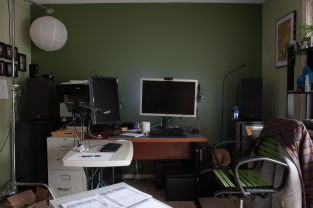 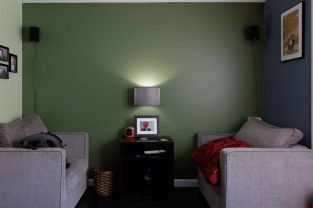 I left a couple walls the original color. The computer used to be on this hinky desk, but it’s been replaced with my modular LoveSac Sactional chairs to create a reading nook. The big TV will go here. The front of the cabinet (an IKEA BESTA square) will be covered by a custom speaker grill to hide the junk inside. 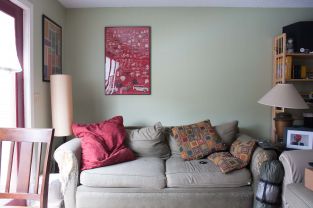 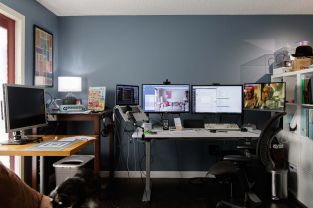 The computers are now on a Standdesk Original where the sofa used to be, with monitors mounted on two Ergotron LX arms.

It’s nice to finally have a space that I can work in and share during coworking events. It’s also a nice stage to live-stream from. We’ve already done a live podcast and a few virtual coworking streams from the space, and it looks pretty good. Getting good audio is still a problem, and the video content itself is not very interesting or professional-looking yet, but it’s been a good learning experience!

I’m actually making slow progress on various 2024 Goals, the very same ones I started the year with but ditched a few months ago. The Javascript Game project is proceeding because I’m actually using parts of it in my contract work, and I have finally gotten the Music Composition Project underway thanks to a bit of nudging from my friend Karl, who brought over a keyboard (bottom left). I’ve been doing some of my 15-minute morning pushes on the music, and have started saving them in this Noob Music Making playlist. 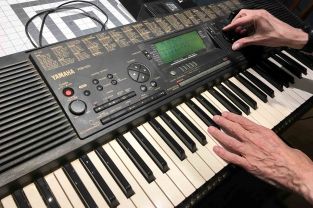 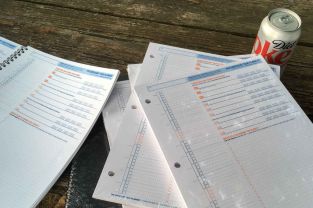 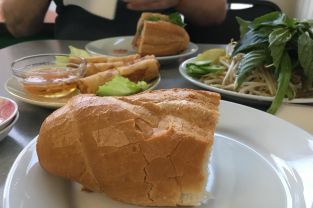 On the business front, I’ve been making more progress on new Emergent Task Planner products, though this is still not going as fast as I’d like. If I am able to put an hour toward it during the week, that’s progress enough! And on a side note, there’s a new Vietnamese restaurant in town that serves banh mi sandwiches. This is a huge quality of life improvement for the area!

Overall, things seem to be moving on all my goals, a bit at a time. Resolving the living room cafe—which is really more of a studio now, but I digress—has made a LOT of community-related activity now possible. I think the biggest surprise has been how useful the virtual coworking has been in maintaining my energy.

Another motivational trick I discovered was the use of chore bounties. I’ve started assigning tedious tasks amounts from $10 to $50 which are added into a “non-essential purchases” fund. Any toys, books, or eating adventures I undertake are detected from this fund, so it’s a way to add incentive to those dull chores. In the past I would just buy the stuff I wanted if I felt like I needed a boost, but NOW there is a sense of EARNED REWARD that I was lacking before. Although I’m not the type of person motivated to work for money, I do love buying toys and gadgets.

I’m also allowing myself to use this fund for buying “indulgence hours” at the going rate of $25/hour. If I feel like doing something ridiculously unnecessary GUILT-FREE, then I use an indulgence.

As I mentioned, October is going to be a very busy month with upcoming business travel. I have a couple weeks to prepare our prototype code for the on-site design sessions. Learning to balance this demand with all the other demands continues to be a challenge; while I’ve accepted that I can’t “do it all”, that doesn’t stop me from wanting to. If too much time passes without the feeling of accomplishment, I get really cranky. So for October, I want to be mindful of my mood toward the work, and try to keep a flexible balance between work and play to produce frequent tangible results. If I don’t have that, I’m really just kidding myself.

So that’s the report for this month! See you again in November!