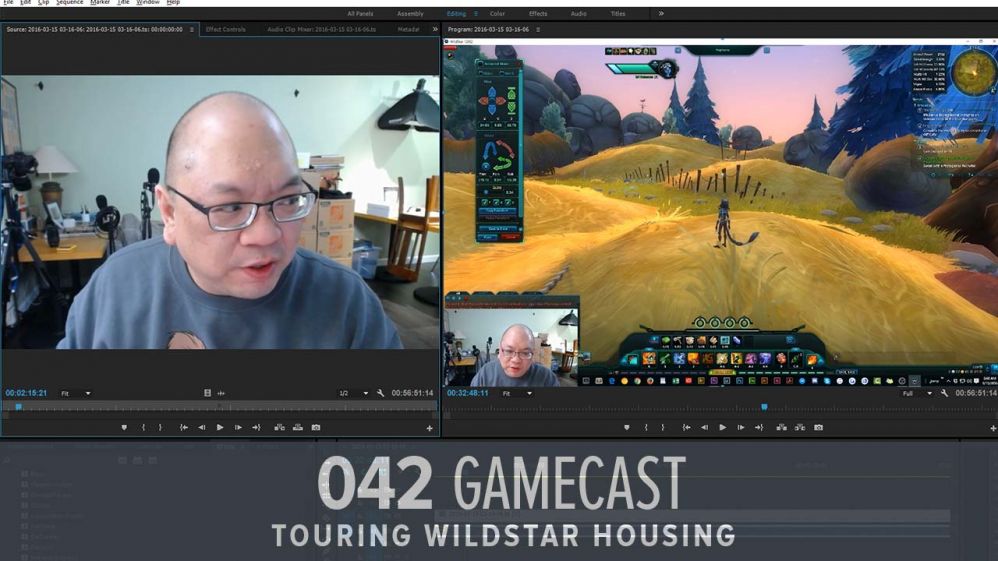 Wow, I’m running a day behind on these posts! Last night was another long one as I attempted to do my first “long screencast” test using Camtasia Studio to record a tour of my housing plot in Wildstar, an online video game in which I have been building a hay farm to relax. So I had to start it all over again!

The choice to “hey, let’s do a tour of a video game!” came from the news that 70 people had been laid-off from Carbine Studios, the US-based (and now wholly-owned subsidiary of Korean gaming giant NCSOFT) that created Wildstar. I’ve spent A LOT of time in it, mostly interacting with other players on their own housing plots and learning about role playing in computer games. This mini-documentary on roleplaying (aka RP) does a good job of outlining the basic motivations and mechanics. I found the community of players fascinating because I also like the idea of making up stories about my characters; this strongly relates to my obsessive interest in what people are doing and related questions like how did they get to here, and where do they want to go?

Video production has been on my mind since unexpectedly launching my Patreon Donation Page yesterday, and as video is going to be a big part of my music composition goal as well, the desire to learn more about it (and test related tools and technique) has become immediate! The long-form screencast test would test my hardware to ensure it wouldn’t crash in the middle of long recording session. With multiple input streams (webcam + desktop for video, game + microphone for audio) captured simultaneously, this is more data than normally courses through the system buses of my aging PC workstation. Plus, I had to admit to myself, I was kind of nervous about what to say and whether I would suck at screencasting…time to shake out those jitters and jump into the deep end to flounder! It would be a learning experience first; if anything shareable came out of it, then I would share it. If not, then I will at least have learned what NOT to do. That’s generally how I reframe the FEAR OF SUCKING into the less-scary LETS SEE HOW BAD IT GETS to metaphorically rubberneck at my own media production disaster, morbidly wondering just how awful I am doing :-)

TRIAL ONE with CAMTASIA STUDIO

I initially was planning on using Camtasia Studio for Windows (version 8.6), as it’s what I used in the last test and it seemed to work fine. Not so this time. For a longer video of about 30 minutes, it crashed while saving the recorded data as the program “hung”. This can be a sign of flaky data flow management by the application developers; attempts to recover the video session were met with failure though to Camtasia’s credit it did try to do it. It was enough for me not to trust the program, and look for another solution.

I have been thinking about trying to do live screencasting to share my design sessions online, and have wondered what the game streamers on TwitchTV have been using. It turns out that there is a popular open source program called Open Broadcaster Software (OBS) that is not only free, but pretty capable as well. It’s one of those kind of programs that has good technical bones and a slightly odd user experience due to the distributed all-volunteer nature of its development team. There’s two versions: the original OBS for Windows PCs and a newer “multiplatform” rewrite called OBS Studio that will work on Windows, Mac, and Linux. Although OBS Studio does not have all the features of the original yet, I chose to run it because it will run on both my Mac and my PC; I wouldn’t even know what I was missing anyway! 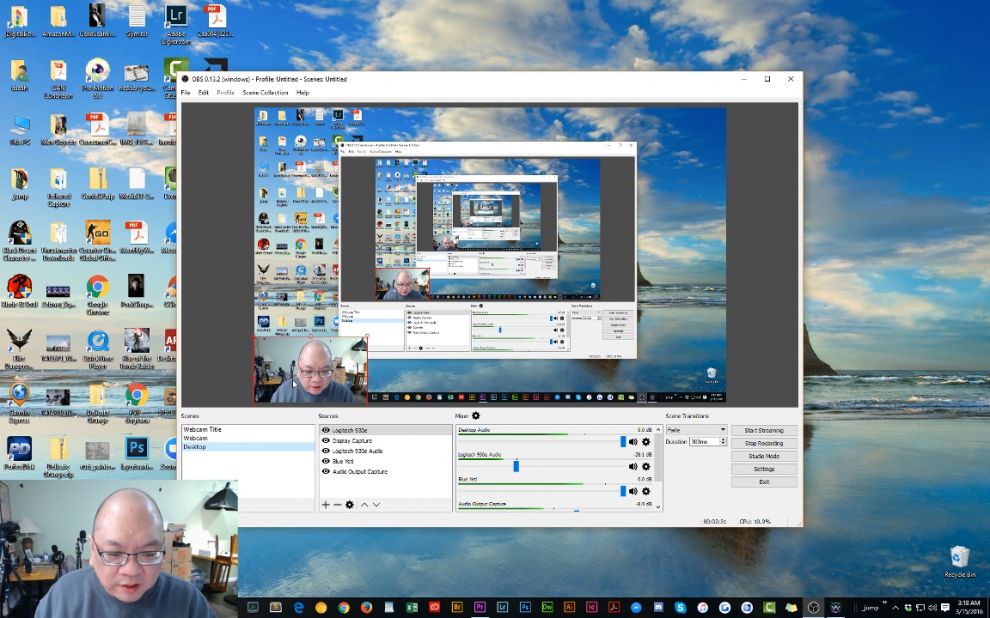 The emphasis that OBS Studio has over Camtasia/Screenflow is that it’s a live switcher. With Camtasia, you generally record what you’re doing and then use the built-in edit suite to zoom, pan, reveal, and annotate the recording in a polished way. Not so with OBS Studio; you instead of an interface where you select what sources to show AS YOU ARE PERFORMING. You can pre-define sets of such “scenes” from their live switcher; it’s sort of like running the board at a live awards show and choosing what cameras and clips to show. A more exciting application is live digital performance, using technology to augment what a single person can do like Jack Conte demonstrates in this cover of “Thrift Shop” (NSFW lyrics) or Kawehi does in this 70s mashup to create a layered live solo performance, or as my music crush Knower does in this video-backed performance. What I’m trying to do is nowhere near as sophisticated or demanding, but I’m finding the emphasis on timing and performing very exciting. Perhaps this exploration has unlocked a new aspirational direction! I already have a preference for minimal post-processing of my writing and podcasting; perhaps being able to do what I do LIVE is a goal in itself.

But I digress. I recorded a walkthrough of my house plot in Wildstar, which is almost an hour long. A few technical mistakes and surprises along the way, I don’t think I encoded the video in the optimal way, and I still have a tendency to slur my words when I talk too fast. I particularly hate it when I use the word thing because I can’t think fast enough. OH WELL. I didn’t die of embarrassment…yet!

This took about 4-5 hours to do, longer than I had planned to spend, but it’s a pretty significant step in the sharing my interests goal using a new-to-me medium. I think there’s a lot of opportunity for me to develop my speaking skills with more practice.

This is a major creative business goal, in hindsight! When I started I figured it was just a simple test, which goes to show that any tiny-seeming creative act can blossom into something bigger. So why not just start with the tiny ones?